Youtube. Plague time: Simon Schama on what history tells us. Eric Pickersgill photo series removes phones to show lonely world. Are you reading this on a handheld device? 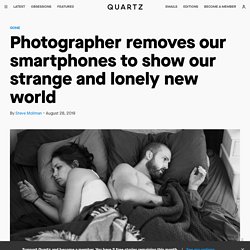 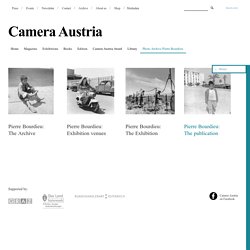 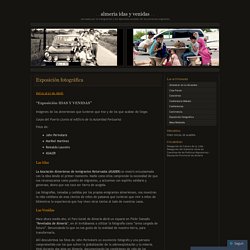 Aspect:Ratio Magazine of Photography. Coyas - Descendents of the Incas. Luis Martin started his photography career in 1970. 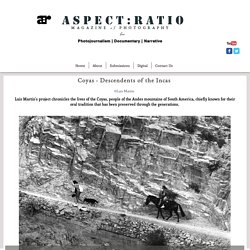 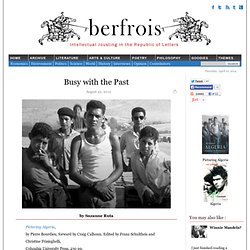 Edited by Franz Schultheis and Christine Frisinghelli, Columbia University Press, 230 pp.Algeria, by Dirk Alvermann, Facsimile edition of a work first published in 1960. Steidl, Germany 2011 In 2004, just around the time the Abu Ghraib scandal broke, an exhibition of photographs from the Algerian war opened in Paris. Slide Show: Otsuchi, Japan, Three Years After the Tsunami. Three years ago this week, Japan was ravaged by a 9.0 earthquake, the largest on record in the country’s history. 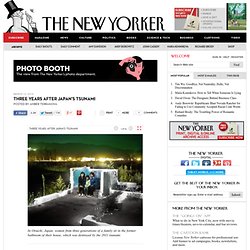 The earthquake, centered under the seabed off Japan’s eastern coast, lasted for five minutes and launched a tsunami that was, in places, nearly thirty feet tall. The waves overtopped a seawall in Otsuchi, a small beach community near the northern tip of Honshu, Japan’s main island, flattening much of the town and causing its residents to seek refuge among the cemeteries in the nearby hills. Some sixteen hundred of the more than fifteen thousand people who died in the earthquake and tsunami were residents of Otsuchi, about ten per cent of the town’s population. The president of Japan’s Red Cross, who visited the town a few days after the earthquake, said at the time, “Everything is destroyed and flattened.

BEFORE THEY PASS AWAY. So it Goes. I was seventeen when I first came across the work of Bruce Davidson. 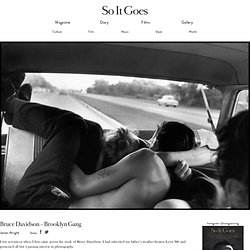 I had inherited my father’s weather-beaten Leica M6 and possessed all but a passing interest in photography. Accustomed as I already was to the immediacy of digital photography, I spent close to a year getting to grips with the rigours of 35mm rangefinder cameras. Documentary Photography in the Age of Anxiety: Fred Ritchin’s “Bending the Frame”

We live in a period of anxiety, a time of deep uncertainty about the foundations and frameworks through which we make sense of life. 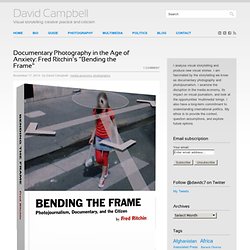 It may have always been like this, but various faiths and philosophies work to convince us that there are guideposts and touch points around which we can orient our purpose and values. The philosopher Richard J. Bernstein, in his seminal 1983 book Beyond Objectivism and Relativism, coined the term “Cartesian Anxiety” for the generalised belief that we have lost even the pretence of secure reference points.

The Casino as Lifeline. Discarded Books, Recovered Nostalgia. A Daughter's Search for an Invisible Presence. We recommend viewing this slide show in full-screen mode. 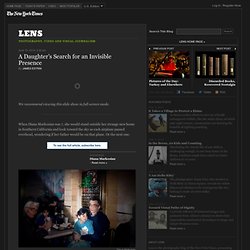 When Diana Markosian was 7, she would stand outside her strange new home in Southern California and look toward the sky as each airplane passed overhead, wondering if her father would be on that plane. Or the next one. But he never came at all. Ms. William E Jones. Documentary Photographer. Into The Fire Trailer. 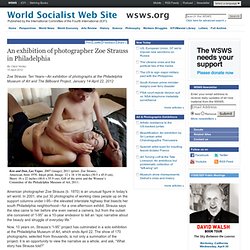 My Africa Is interviews Photographer Hector Mediavilla / My Africa Is. In the fall of 2012, we connected with Hector Mediavilla, a photographer from Spain, who caught our attention through his haunting images of the Grande Hotel in Beira Mozambique. His pictures captured a once decadent hotel, turned neighborhood squat that had served as a home to its inhabitants since the Mozambican civil war. They told the stories of everyday life, small wins, and resourcefulness of individuals living in the hotels, which strayed from other angles that would usually accompany such a story.

With his recent documentary on the Sapeurs of Congo Brazzaville for Guiness, we decided to reformat the video, and revisit Hector’s subjects. We reached out to Hector to hear about his experience shooting the Grande Hotel, and soon uncovered his work with the Sapeurs.

Photographs From Prisons in Russia and Ukraine. What does prison look like?