Gaza Sderot - Life in spite of everything 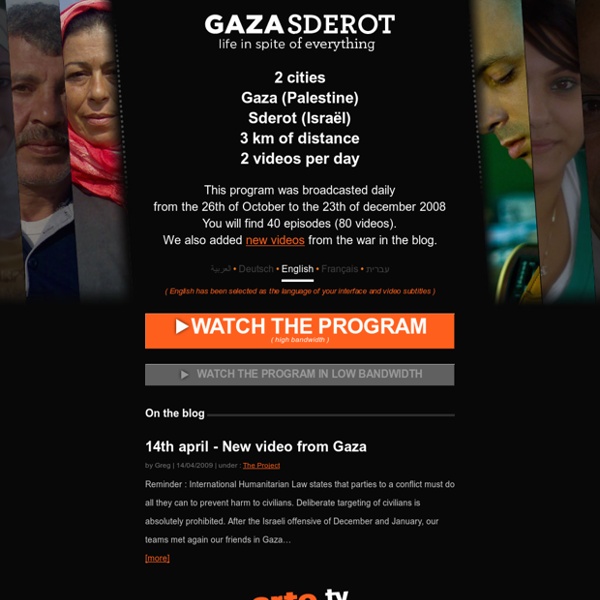 2 citiesGaza (Palestine)Sderot (Israël)3 km of distance2 videos per day This program was broadcasted dailyfrom the 26th of October to the 23th of december 2008You will find 40 episodes (80 videos). We also added new videos from the war in the blog. Watch the program ( high bandwidth ) Watch the program in low bandwidth 14th april - New video from Gaza by Greg | 14/04/2009 | under : The Project

interactive - National Film Board of Canada At the NFB we like change. For 70 years we've experimented, innovated, and produced a legacy of technical and creative firsts in cinema, animation, and documentary. Think McLaren, Lipsett, Brittain, and Jutra; Stereoscopic 3d, VTR, and participatory media. Today, the way we create, consume, and connect with each other changes by the minute.

For Want of Water - Topics - Las Vegas Sun — Interactive by Zach Wise Las Vegas was first settled for its springs, springs that made it an oasis in the desert. Although those springs have decades since run dry, water is still the most import resource to Las Vegas and the dry Southwest. And by all indications the region is only going to get dryer. Scientists predict devastating effects from global warming, conservationists are calling for a halt to growth in Southern Nevada as a way to preserve supplies and water managers are looking to ever more creative ways to reduce reliance on the overburdened Colorado River. A Colorado River reservoir at Lake Mead is the source of 90 percent of the valley's water supply.

Evaluating Interactive Documentaries: Audience, Impact and Innovation in Public Interest Media Public interest media organizations are increasingly interested in experimenting with interactive and participatory approaches to documentary storytelling enabled by digital technologies. However, due to the experimental nature of these interactive documentaries, it is not yet clear whether the more active user engagements they require translate into outcomes like sustained attention, greater narrative comprehension, enhanced learning, empathy or civic engagement – never mind larger societal impacts like improved public discourse, behavior change or policy change. The shifting definitions and measures of complex, multi-­‐dimensional concepts like “engagement” and “impact” is a challenge for public interest media organizations migrating to digital platforms – particularly at a time when audience activities have become far more transparent and funders place greater emphasis on “data-­driven” impact measurement. Sean Flynn