Videos on the People, Issues, and Ideas Changing the P 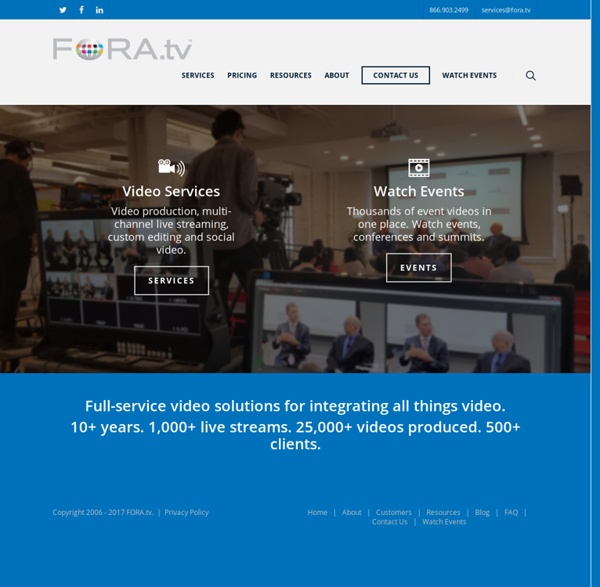 100 Incredible Lectures from the World’s Top Scientists Posted on Thursday June 18, 2009 by Staff Writers By Sarah Russel Unless you’re enrolled at one of the best online colleges or are an elite member of the science and engineering inner circle, you’re probably left out of most of the exciting research explored by the world’s greatest scientists. But thanks to the Internet and the generosity of many universities and online colleges, you’ve now got access to the cutting edge theories and projects that are changing the world in this list below. If you’re looking for even more amazing lectures, check out our updated list for 2012 with more talks from great minds.

Light as a Growth Regulator: Controlling Plant Biology with Narrow-bandwidth Solid-state Lighting Systems + Author Affiliations Abstract In the mission of plant husbandry, light is a critical yet passive entity. The potential to actively implement dynamic lighting strategies to control plant growth and development holds great promise in the future of plant cultivation. In other words, rather than simply using a single stable light condition to maintain photosynthesis, might it be possible to continually adjust fluence rate, wavelength combinations, and photoperiods to actively manipulate plant morphology and production? Research over the past 100 years suggests that it is so, and today's solid-state, narrow bandwidth lighting platforms offer a unique opportunity to test this hypothesis.

5min - Find the best how to, instructional and DIY videos – Life Videopedia Up next 0:26 0:38 0:41 2:41 0:56 0:46 1:01 1:14 0:56 Caption Languages English Background Transparency Blackberry Thyme Sparkler How to Be 25% Happier in Five Minutes a Day Remember when you got a raise and bought a new car, and you’ve been happy ever since? Neither do I. It doesn’t work that way, does it? We buy things, we achieve goals, we indulge ourselves—but none of it gives us lasting happiness. So, what does work? UTA Flight 772 Crash Information and Memorial Construction Photos A friend told me to go to a certain latitude and longitude on Google Maps. When I noticed it seemed to be in the middle of an African desert, I thought he was just sending nonsense. But when I zoomed in, my mind was blown.

UC Berkeley Summer Reading 2006 The World Is Flat: A Brief History of the Twenty-first CenturyThomas L. FriedmanNew York: Farrar, Straus and Giroux, 2005 Although the message can be boiled down into fewer pages, a future President should understand that technology has created the opportunity for anyone in the world to perform tasks that used to be limited by geography.

A Helmet That Slows Down Time, Without The Drugs Last week, NPR’s Adam Frank introduced us to a scientist who is suggesting that human reality is actually just a complex piece of software. German interaction designer Lorenz Potthast, meanwhile, is writing software that lets humans alter their own reality. Potthast is the creator of the Decelerator Helmet, an experimental device that slows down the wearer’s surroundings, significantly changing the way they experience time. The project, he explains, responds to “the increasingly hectic, overstimulated and restless environment” of modern life. Secrets of Success Dr. Paul Secrets to Success: 13 Fundamentals I have spent many years studying and analyzing what successful people do in every walk of life and have come to the following conclusion: there is no single formula for achieving success in any endeavor. But there are core traits that great leaders share in common and I have outlined these below.

100 Ideas That Changed Architecture by Maria Popova How the art and science of building evolved along the parallel axes of the philosophical and the pragmatic. “Art is a discovery and development of elementary principles of nature into beautiful forms suitable for human use,” legendary architect Frank Lloyd Wright famously observed. Indeed, this convergence of practicality and beauty is perhaps the central defining characteristic of architecture itself, and of every meaningful development that has pushed the discipline forward over the millennia. Weston writes in the introduction: