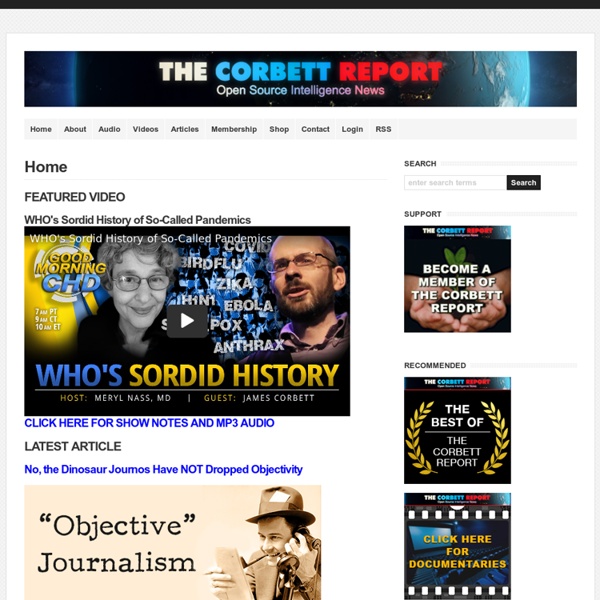 Zombie Hasbara: 'World War Z' and Hollywood’s Zionist embrace Zombies rush the wall in World War Z. I went to the Drive-In in Atlanta Friday night, to celebrate a friend’s birthday, a beautiful night under an almost full moon. We watched This is The End and Fast and Furious 6, and two of us stayed for the 2:00 am screening of World War Z. I’m not a zombie fanatic, so other than watching the Walking Dead, I had few expectations beyond the trailers that have been on TV since the Super Bowl. Earth Island Institute SeaWorld’s Advertisements Are Full Of Lies (Video) In effort to reinvent its image, theme park resorts to fudging facts again by Laura Bridgeman – October 6, 2017 The International Marine Mammal Project released a new video last week that debunks many of the lies SeaWorld tells the public and its shareholders, lies that are increasingly getting the theme park and entertainment company into hot water. At its core, SeaWorld…> Read more A Tale of Two Wild Sisters

S&P's $2 Trillion Error Didn't Change Rating Cut Decision The outcome: the agency affirmed the decision the committee had made just that morning, yanking its triple-A rating from the United States and downgrading it one notch to AA+. The error and the time the ratings agency took to reconsider its downgrade are among the controversies surrounding the ultimate decision to downgrade the United States, which has held the agency’s top triple-A rating since 1941. Also at issue is whether the new data shows the US eventually meeting the S&P’s criteria of a sustainable deficit level and whether the agency should have included state and local government debt in its rating of US sovereign debt. Neither side provided the data Friday evening that was at issue. What is not at issue is that sometime in the early afternoon Friday, S&P informed the US Treasury that its committee had decided to downgrade US sovereign debt.

Agenda 21 Agenda 21 is Sustainable Development, and was created through the United Nations. It is the blueprint for depopulation and total control, under the banner of saving the environment. It is like the head of a beast that has thousands of tentacles, originating from the United Nations. The 3 primary tools that are used are: Man-made global warmingWater shortagesEndangered Species Act Security Studies Program (SSP) A Defense Concept for Ukraine This paper was written by Professor Barry R. Posen twenty years ago.

Symbolia “Neuroscientific research supports what narrative nonfiction storytellers instinctively know: Stories with clear, emotionally evocative dramatic arcs are most effective at keeping readers engaged. These stories cause the body to produce chemicals including cortisol, which focuses attention, as well as oxytocin, which is associated with empathy. They also light up areas of the brain linked to understanding others.” — Erin Polgreen wrote an essay for Nieman Reports on the power of comics and non-fiction narratives. Drunken Ben Bernanke Tells Everyone At Neighborhood Bar How Screwed U.S. Economy Really Is The intoxicated Federal Reserve chairman informs bar patrons of the dangers of reckless spending. SEWARD, NE—Claiming he wasn’t afraid to let everyone in attendance know about “the real mess we’re in,” Federal Reserve chairman Ben Bernanke reportedly got drunk Tuesday and told everyone at Elwood’s Corner Tavern about how absolutely fucked the U.S. economy actually is. Bernanke, who sources confirmed was “totally sloshed,” arrived at the drinking establishment at approximately 5:30 p.m., ensconced himself upon a bar stool, and consumed several bottles of Miller High Life and a half-dozen shots of whiskey while loudly proclaiming to any patron who would listen that the economic outlook was “pretty goddamned awful if you want the God’s honest truth.”

Geithner: US has 'huge stake' in Euro crisis WASHINGTON (AFP) - US Treasury Secretary Timothy Geithner said Monday that America had a huge stake in helping Europe find a "more effective strategy" to tackle its financial crisis. Geithner, just back from a trip to Poland in which he reportedly expressed concern of a "catastrophic risk" to markets from the Greek debt crisis, said at the White House that Europe had the will to combat its challenges. "We have a huge stake as a country in helping them deal with those challenges.

Cost of War to the United States About | Embed | Notes & Sources To embed the Cost of Military Action Against ISIS counter on your website, blog, etc, follow these simple instructions: 1) Add the following javascript to your page: The New Media Movement Is Here: 20 News Sites Kicking Our Generation Into Action At the height of the 2012 presidential election season, Gallup reported that “Americans' distrust in the media hit a new high this year, with 60% saying they have little or no trust in the mass media to report the news fully, accurately, and fairly.” As disappointing as the numbers are, they're not much of a surprise to Americans such as yourself, who have already sought out alternatives to mainstream news sources. Unfortunately, however, most Americans haven't.