“Doomsday Seed Vault” in the Arctic 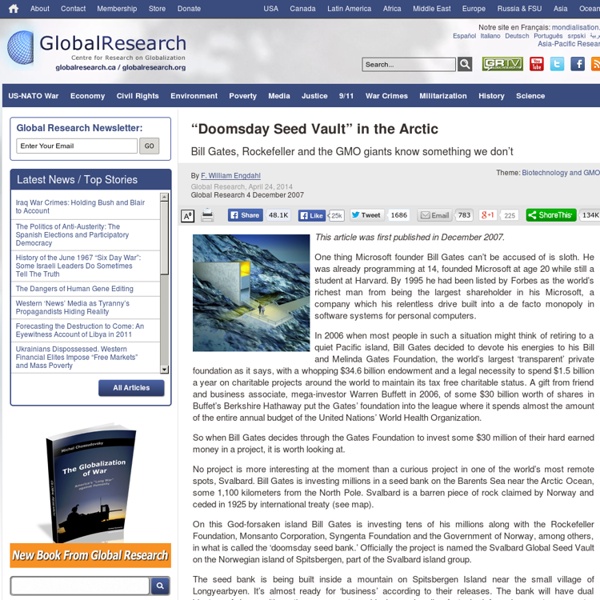 This article was first published in December 2007. One thing Microsoft founder Bill Gates can’t be accused of is sloth. He was already programming at 14, founded Microsoft at age 20 while still a student at Harvard. By 1995 he had been listed by Forbes as the world’s richest man from being the largest shareholder in his Microsoft, a company which his relentless drive built into a de facto monopoly in software systems for personal computers. In 2006 when most people in such a situation might think of retiring to a quiet Pacific island, Bill Gates decided to devote his energies to his Bill and Melinda Gates Foundation, the world’s largest ‘transparent’ private foundation as it says, with a whopping $34.6 billion endowment and a legal necessity to spend $1.5 billion a year on charitable projects around the world to maintain its tax free charitable status. No project is more interesting at the moment than a curious project in one of the world’s most remote spots, Svalbard. John H. Related:  Biology/Zoology • preparations

Rothamsted Research | where knowledge grows "Doomsday Seed Vault” in the Arctic Barb’s Note: This is a must-read article to understand how genetic engineering started and where it is going. Pay special attention to the section titled “GMO as a weapon of biowarfare?” Bill Gates, Rockefeller and the GMO giants know something we don’t… One thing Microsoft founder Bill Gates can’t be accused of is sloth. In 2006 when most people in such a situation might think of retiring to a quiet Pacific island, Bill Gates decided to devote his energies to his Bill and Melinda Gates Foundation, the world’s largest ‘transparent’ private foundation as it says, with a whopping $34.6 billion endowment and a legal necessity to spend $1.5 billion a year on charitable projects around the world to maintain its tax free charitable status. So when Bill Gates decides through the Gates Foundation to invest some $30 million of their hard earned money in a project, it is worth looking at. The seed bank is being built inside a mountain on Spitsbergen Island near the small village of Longyearbyen.

Bill Gates funds birth control microchip that lasts 16 years inside the body and can be turned on or off with remote control Helped along by one of the world’s most notable billionaires, a U.S. firm is developing a tiny implant that acts as a contraceptive for 16 years — and can be turned on or off using a remote control. The birth control microchip, funded by the Bill and Melinda Gates Foundation, would hold nearly two decades worth of a hormone commonly used in contraceptives and dispense 30 micrograms a day, according to a report from the MIT Technology Review. The new birth control, which is set to begin preclinical testing next year with hopes of putting it on shelves in 2018, can be implanted in the buttocks, upper arm or abdomen. During Mr. (Read the rest of the story here…) Be Sociable, Share!

MH370 kept hidden at top-secret US military base – media reports | OCCUPY AMERICA According to one of the latest, unlike what Malaysian Prime Minister Najib Razak backed by his Australian counterpart Tony Abbott is claiming, the plane did not crash into the southern Indian Ocean but was captured. MH370 could have been kidnapped to get to the technical brain-trust on board – 20 Freescale Semiconductor employees travelling to China. Freescale attracted attention because it is a Texas-based technology firm that develops components for hi-tech weapons systems and aircraft navigation among other things. Interestingly, that leading innovative company has been oddly unwilling to provide information on the missing people. Only the nationalities of the employees were made public: 12 of them were from Malaysia and eight from China. However, Freescale has persistently declined to release their identities. Nevertheless, Mitch Haws, Freescale’s vice president, described them as “people with a lot of experience and technical background,” adding that “they were very important.”

GMO and the Corporate Patenting of Living Organisms: Monsanto’s Patents on Life By Katherine Paul, Ronnie Cummins In May 2013, the U.S. Supreme Court began hearing arguments in a seed patent infringement case that pits a small farmer from Indiana, 75-year old Vernon Hugh Bowman, against biotech goliath Monsanto. Reporters from the New York Times to the Sacramento Bee dissected the legal arguments. What most of them didn’t report on is the absurdity – and the danger – of allowing companies to patent living organisms in the first place, and then use those patents to attempt to monopolize world seed and food production. The case boils down to this. The press and public have fixated on the sticky legal details of the case, and the classic David vs. The real issue is this: Why have we surrendered control over something so basic to human survival as seeds? Monsanto profits handsomely from selling its patented seeds. But little of what Monsanto has promised, to farmers and the world, has proven true. And the rest of us?

Farm Wars 'Shadow Government' News To Congress Key congressional leaders say they didn't know President Bush had established a "shadow government," moving dozens of senior civilian managers to secret underground locations outside Washington to ensure that the federal government could survive a devastating terrorist attack on the nation's capital, The Washington Post says in its Saturday editions. Senate Majority Leader Thomas A. Daschle (D-S.D.) told the Post he had not been informed by the White House about the role, location or even the existence of the shadow government that the administration began to deploy the morning of the Sept. 11 hijackings. An aide to House Minority Leader Richard A. Gephardt (D-Mo.) said he was also unaware of the administration's move. Among Congress's GOP leadership, aides to House Speaker J. Aides to Sen. Mr. Such an operation was conceived as a Cold War precaution against nuclear attack during the Eisenhower administration but never used until now. As next in line to power behind Mr.

Project Prophecy Copyright - 2014 Money Map Press, LLC. The Money Map Press is a publishing company that does not act as a personal investment advisor for any specific individual. Nor do we advocate the purchase or sale of any security or investment for any specific individual. Orchid Observers Photograph wild orchids and extract data from three centuries of Museum specimens to help us examine what impact climate change is having on the UK’s orchids. Why we are doing the project Fifty-six native species of orchid grow wild in the UK, flowering from April to September. Recent research indicates that climate change is affecting the flowering time of the early spider orchid, Ophrys sphegodes. To gather data from across the UK, we need as many people as possible to photograph orchids this spring and summer, and to send us the images with the date and location. Alongside this, we have around 15,000 orchid specimens in the Museum's British and Irish herbarium. How to take part Outdoor photography activity 1. 2. 3. 4. 5. Online activity 1. 2. 3.

Where Is the Proof that UN Soldiers are Actively Operating on American Soil? Oh, Right Here... Frank Drover The Daily Sheeple August 17th, 2012 Reader Views: 119,611 As talk of the US government’s police state expansion heats up and the threat of martial law becomes the topic of conversation for many who are concerned about recent legislative actions and Executive branch orders, many Americans remain skeptical that foreign troops have even stepped foot on American sovereign soil. They argue that there’s no way that we’d allow foreigners access to our military, technology, strategies or tactics. Where’s the proof that there are thousands of United Nations soldiers and units in America? It turns out the proof is right here. Not only are foreign troops under the banner of the United Nations stationed within the continental United States, they are and have been actively training, and not just for traditional military engagements. All of us have heard over the years rumors of foreign troops in the USA. Video excerpt of Police State 2000 (full movie here) showing foreign troops in the US:

22 Reasons Why Starting World War 3 In The Middle East Is A Really Bad Idea While most of the country is obsessing over Miley Cyrus, the Obama administration is preparing a military attack against Syria which has the potential of starting World War 3. In fact, it is being reported that cruise missile strikes could begin "as early as Thursday". The Obama administration is pledging that the strikes will be "limited", but what happens when the Syrians fight back? What happens if they sink a U.S. naval vessel or they have agents start hitting targets inside the United States? Then we would have a full-blown war on our hands. And what happens if the Syrians decide to retaliate by hitting Israel? We are looking at a scenario where the entire Middle East could be set aflame, and that might only be just the beginning. Could this be the beginning of a chain of events that could eventually lead to a massive global conflict with Russia and China on one side and the United States on the other? #1 The American people are overwhelmingly against going to war with Syria...

Aquatic Science: Ocean Acidification Scientists refer to ocean acidification as the "other carbon dioxide problem", the first being global warming. From tropic reefs to the polar ice-caps, carbon dioxide is acidifying the world's oceans. The large quantity of atmospheric CO2 being absorbed by the world's oceans is making them more acidic than they have been for tens of millions of years. Carbon dioxide is changing the chemistry of the ocean. Thousands of ocean species build protective shells to survive. Shell in polar water predicted for 2100 Corals and plankton play a key factor in ocean food webs. Similarly, ocean acidification has a major impact on human life. 500 million people depend on coral reefs for their daily food and income. We can slow the rate of ocean acidification through numerous means. - Victoria Mehlhaff -

Implications of climate change for agricultural productivity in the early twenty-first century (a) Changes in mean climate The nature of agriculture and farming practices in any particular location are strongly influenced by the long-term mean climate state—the experience and infrastructure of local farming communities are generally appropriate to particular types of farming and to a particular group of crops which are known to be productive under the current climate. Changes in the mean climate away from current states may require adjustments to current practices in order to maintain productivity, and in some cases the optimum type of farming may change. Higher growing season temperatures can significantly impact agricultural productivity, farm incomes and food security (Battisti & Naylor 2009). In areas where temperatures are already close to the physiological maxima for crops, such as seasonally arid and tropical regions, higher temperatures may be more immediately detrimental, increasing the heat stress on crops and water loss by evaporation. Figure 1. Table 1. Figure 2.