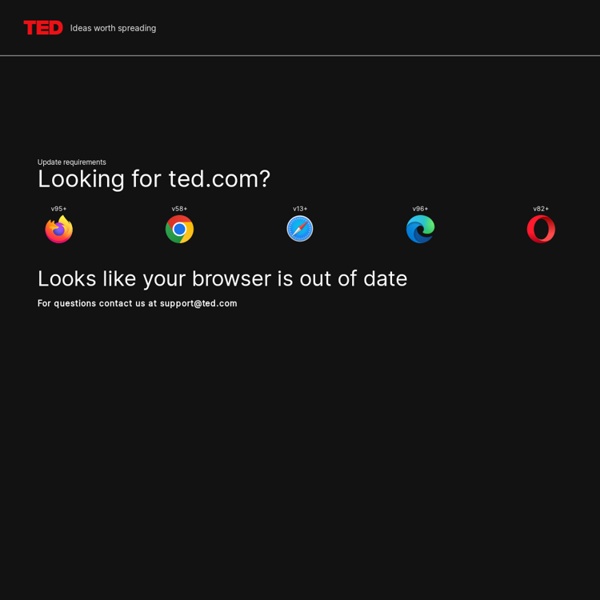 What motivates us at work? More than money “When we think about how people work, the naïve intuition we have is that people are like rats in a maze,” says behavioral economist Dan Ariely (TED Talk: What makes us feel good about our work?) “We really have this incredibly simplistic view of why people work and what the labor market looks like.” Instead, when you look carefully at the way people work, he says, you find out there’s a lot more at play — and at stake — than money. To End Poverty, You Have to End Corruption  Corruption and poverty unfortunately go hand-in-hand, threatening the lives of too many people. In countries where people are forced to bribe to get essential services like health and water the toll can be horrifying. Eight times more women die having children in places where more than 60 per cent of people report paying bribes, compared to countries where bribery rates are less than 30 per cent. That's 482 women dying for every 100,000 births in more corrupt countries, compared to 57 deaths where bribery is less. The rate goes down to less than 10 deaths per 100,000 in many developed countries.

Sweden is shifting to a 6-hour work day Despite research telling us it’s a really bad idea, many of us end up working 50-hour weeks or more because we think we’ll get more done and reap the benefits later. And according to a study published last month involving 600,000 people, those of us who clock up a 55-hour week will have a 33 percent greater risk of having a stroke than those who maintain a 35- to 40-hour week. With this in mind, Sweden is moving towards a standard 6-hour work day, with businesses across the country having already implemented the change, and a retirement home embarking on a year-long experiment to compare the costs and benefits of a shorter working day.

2014 Corruption Perceptions Index You can now embed three different sizes of the above map in your site. Just click the size you want using the buttons below and copy the iframe code that appears in the box. Paste this into your site where you'd like the map to show up and voilà! Countries at the bottom need to adopt radical anti-corruption measures in favour of their people. Countries at the top of the index should make sure they don’t export corrupt practices to underdeveloped countries.”

Kate Raworth Humanity’s 21st century challenge is to ensure that every person has the resources they need to meet their human rights, while collectively we live within the ecological means of this one planet. The ‘doughnut’ of planetary and social boundaries is a playfully serious approach to framing that challenge. The doughnut of social and planetary boundaries Why We Need Government to Evolve as Fast as Technology From deep learning to gene editing, the world of technology is moving fast. But at Singularity University, we believe amazing tech is only half the equation. Equally important is how we use technology.

The Principles of Active Waiting vs. feeling-like-a-loser, losing-your-mind kind of waiting... I’ve learned a lot about waiting in the last while. I can’t say I’m a fan of waiting for what I want but I’ve finally learned to harness the waiting periods in a new way. Some might call it the virtue of patience, but I’ll never admit to becoming patient. I have a reputation to protect. Inactive waiting is total hell. It’s a sure way to get stuck, slip into complaining, and let your creativity get all flabby.

7 Ways to Break Clutter’s Emotional Grip Except in cases of compulsive hoarding, the word “clutter” is associated more with annoyance than with addiction. Yet as with all dependencies, the piling up of possessions, obligations or worries creates a powerful comfort zone. It also brings pain at any thought of major change. There can be an emotional tug-of-war between the longing for better things and the dread of climbing out of our rut to walk forward. Renaissance Florence Was a Better Model for Innovation than Silicon Valley Is Urban planners the world over yearn to replicate the success of Silicon Valley: witness Thames Valley (England) and Silicon Oasis (Dubai), to name just two of these attempts. Invariably, these well-intentioned efforts fail for the simple reason that they’re trying to replicate the wrong model. Silicon Valley is too new, too now, to glean lessons from.

161 Aspects of Self Reliance When you are new to self-reliance, it’s easy to get overwhelmed. I wish I could tell you the “lost” feeling changes over time, but it doesn’t. The truth is; while you expand your knowledge of taking care of yourself, your interests in new subjects and skills can spiral out of control. That’s the thing with depending on yourself, it’s hard to just specialize on doing just one thing. Sure you can become a master of growing potatoes, but potatoes won’t keep you warm through the winter or quench your thirst.

The Curious Case of Men and Women's Buttons — Atlantic Mobile On shirts, they're on the left for the ladies and on the right for the gents. That's because of horses, babies, and Napoleon. "Are you wearing lady clothes?" Darryl Philbin asked Michael Scott. No, the regional manager of the fictional Dunder Mifflin insisted: His suit fits him, and he is a man, therefore, "at the very least, it's bisexual." When your mother says she’s fat Photo: Getty Dear Mum, I was seven when I discovered that you were fat, ugly and horrible. Up until that point I had believed that you were beautiful – in every sense of the word. I remember flicking through old photo albums and staring at pictures of you standing on the deck of a boat. Your white strapless bathing suit looked so glamorous, just like a movie star.

Do a pre-test Not about ignorance but about pre-conceived ideas: Data Analysis by maarten1962 Jul 9