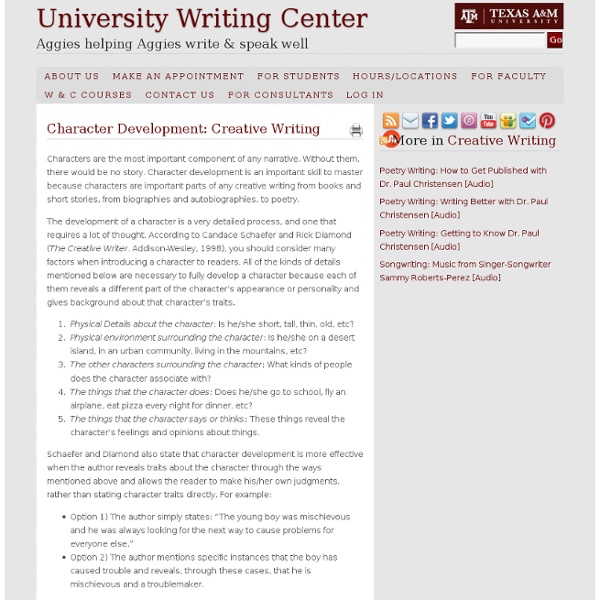 Print version Characters are the most important component of any narrative. Without them, there would be no story. Character development is an important skill to master because characters are important parts of any creative writing from books and short stories, from biographies and autobiographies, to poetry. The development of a character is a very detailed process, and one that requires a lot of thought. Physical Details about the character: Is he/she short, tall, thin, old, etc? Schaefer and Diamond also state that character development is more effective when the author reveals traits about the character through the ways mentioned above and allows the reader to make his/her own judgments, rather than stating character traits directly. Option 2 is a more effective approach because it allows the readers to form judgments about the young boy themselves, rather than simply accepting the author’s word for it. His/her family: relationships, beliefs, habits, religion, activities, etc.

Mary Sue Test Background A Mary Sue is an unrealistic type of literary character commonly created by inexperienced authors. Although they vary, a typical Mary Sue has an unreasonable number of cool or special traits, especially ones the author wishes he or she had, and they tend to accomplish things too easily, solve problems too neatly, and become the center of attention whether they deserve it or not. This test aims to help authors evaluate whether their characters are in danger of becoming Mary Sues by drawing attention to potentially problematic traits. When taking this test, be honest, but keep it in perspective and remember context. The test has seven sections: This test comes from this thread in the Writer's Block subforum on TV Tropes. Section 1: Author Avatars There's nothing wrong with using yourself as the basis for a character. Generally, items in this section score one point each. Scoring -28-0: Your character may be an antihero. 1-10: Your character is understated. Return to top

Personality Traits List We've heard this line many times from friends, family and others, "Oh that's just the way he/she is. It's in his/her personality to behave that way." We use the term 'personality' so loosely that we have forgotten to analyze what it truly means. Wouldn't the world be absolutely dull and ridiculously boring if we all were of the same personality type? It gives us all a sense of individuality, separating one from those who do not possess the same traits that would solely define you. List of Personality Traits There are all kinds of personality traits that a person can possess, making us very different from others. Active Austere Anxious Awkward Angry Arrogant Attentive Amiable Animated Aggressive Annoyed Alert Boastful Brilliant Bashful Bad Brainy Babyish Bossy Brutish Brave Bold Bright Blunt Careless Committed Charming Confused Clumsy Confident Cautious Critical Consistent Conceited Cultured Crafty Cheerful Candid Clever Creative Capable Caring Calm Civilized Diligent Disloyal Decisive Dark Dreamer Dishonest Dutiful Devoted Distressed Dull

Names for Villains: 5 Tips to Help You Choose a Name for the Baddie When creating villains, it's all too tempting to give them a name that embodies their evilness. It's important, however, to keep in mind the normal conventions of naming. Names tend to reveal something about location, year, ethnicity, or nationality-not whether a person is destined to be a tyrannical overlord. Always think about the villain's parents. Would they really name their kid "Diablo?" That doesn't mean you need to saddle your villain with a name like Ted or Mary, but think about plausibility before naming your villain. Names for Villains Tip 1: Picking a neutral name Like I mentioned earlier, choosing a name based on traditional factors is the easiest way to achieve plausibility. But let's face it. Names for Villains Tip 2: Using evil-sounding names or names with dark meanings Do you want to slyly suggest to your readers your character is a sadistic bastard? If you want to reveal something about the character through their name, keep the villains' motive in mind. Conclusion

Basic Tips To Write Better (And More Likeable) Badasses Yet another character type that is often poorly-written by amateurs, many badass characters end up becoming completely unlikeable or even despicable. Here are a few tips to keep these characters from going this route. Your character needs to be more than tough and talented. Strong, sexy, smart, skilled, and sassy are all great character traits, but on their own they're going to leave you with a character who is at best forgettable, and at worst completely unlikeable. You build a good badass the same way you build any other character type - by creating a complex, three-dimensional, nuanced character with believable emotions, fears, hopes, vulnerabilities, hobbies, quirks, etc. Stop and ask yourself: if you took away the skills and talents that make your character badass, do you think anyone would care about or want to associate with your character? Don't create an unstoppable kickass machine. Be careful that your character doesn't become an amoral/self-centered jerkass.