Say No To Palm Oil 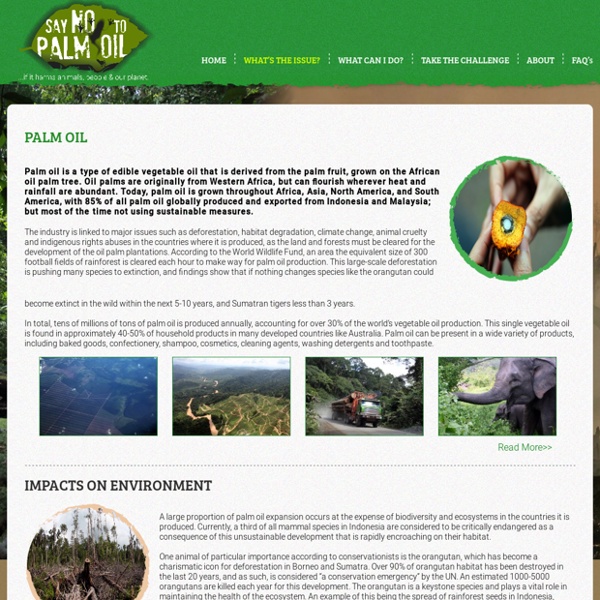 Certified Sustainable Palm Oil (CSPO) CSPO represents the certification process where palm oil growers must commit to real credible sustainability standards through time-bound plans. There is an increasing demand for palm oil that is sustainably certified in Europe and North America, including big names such as Walmart, Unilever and Nestle. As of 2011, CSPO represented over 10% of the global palm oil market but this has increased in recent years and is projected to increase in coming years. The certification process consists of reviewing existing production operations and identifying areas that must be improved to reach the CSPO standards to then be approved by a certification body. The standards are based on eight principles which have been retrieved from the RSPO website: 1. 2. 3. 4. 5. 6. 7. 8. Roundtable on Sustainable Palm Oil (RSPO) The Good: The RSPO is currently the best sustainability and social impact standard that exists around the palm oil industry.

3 things from the Sustainability Report 2014 that we need to talk about As the corporate social and environmental responsibilities increase, sustainability does matter for businesses in terms of corporate management. To communicate its efforts for sustainable management and the performance with people, Samsung Electronics has been publishing the Sustainability Report since 2008. ▲Three constituent parts of Sustainable Development (Source: Wikipedia) Palm oil Fruit from the oil palm © Greenpeace/Solness Our consumption of palm oil is rocketing: compared to levels in 2000, demand is predicted to more than double by 2030 and to triple by 2050. Over 70 per cent ends up in food, but the biofuels industry is expanding rapidly.

Palm Oil Scorecard 2015: Fries, Face Wash, Forests See the scores: Fast food | Store brands | Packaged foods | Personal care See company updates Palm oil is a globally traded commodity used in a wide array of common consumer products, from shampoo to cookies. And much of this palm oil is produced in ways that involve the destruction of tropical forests and peatlands, adding to global warming emissions and reducing habitat for many already threatened species.

First American Food Company Adopts Truly Responsible Palm Oil Commitment Palm Oil Innovation Group welcomes Boulder Brands Palm Oil Announcement An alliance of international NGOs and palm oil companies today welcomed the adoption of a leading palm oil commitment by Boulder Brands. Boulder Brands is the first American food company to require its suppliers to independently verify their compliance with the Palm Oil Innovation Group (POIG). Its commitment requires its suppliers to break the link between palm oil production and deforestation by protecting and restoring natural forests, and upholding human rights and the rights of all workers. “Today, Boulder Brands has put its weight behind an exciting and innovative transformation of the palm oil sector.

What causes South East Asia's haze? Image copyright AFP Forest fires in Indonesia have resulted in a smoky haze blanketing the South East Asian region for months. Both the haze and the controversy around it have intensified in recent years. But what causes it, and what makes it such a contentious issue? Samsung is urgently looking into the recent child labor allegations and will adhere to its zero-tolerance policy At Samsung Electronics, we deeply care about the health and safety of all our employees and employees at our suppliers, and strictly maintain a zero tolerance policy on child labor. As part of our pledge against child labor, Samsung routinely conducts inspections to monitor our suppliers to ensure they follow our commitment. For the supplier in question, we have conducted a thorough audit in March 2013 which was followed by a third party inspection in August 2013, and yet another one in June 2014. No cases of child labor were found during these audits.We are urgently looking into the latest allegations and will take appropriate measures in accordance with our policies to prevent any cases of child labor in our suppliers.

Palm Oil and How it threatens Orangutans Palm oil is derived from the fruit of the oil palm tree. The palm fruit yields both palm oil and palm kernel oil. Palm oil is extracted from the pulp of the fruit and is an edible oil used in food. Palm kernel oil is extracted from the seed of the fruit and is used in the manufacture of cosmetics. There are two main species of oil palm tree; Elaeis guineensis, native to West Africa and Elaeis oleifera, native to Central and South America. Both species grow in tropical regions including Colombia in South America, New Guinea in the Pacific, Ghana in Africa and Indonesia and Malaysia in Southeast Asiia.

Greenpeace Southeast Asia Forest and peat fires are emerging as a global threat and are driving a public health emergency in Southeast Asia. Indonesia is the front line. And it's here where much of the smoke, known as the Haze Wave, originates. Indonesia's peat stores a massive amount of carbon – up to 60 billion tonnes, which makes it a virtual carbon bomb if even some of it was released into the air. And that's not to mention the untold amounts of air pollution to metropolises across the region, including Singapore. Over 75% of fire hotspots in Indonesia occur on peatland: partially decayed, dead vegetation which has accumulated over thousands of years and is typically saturated with water – it is virtually impossible to set alight in its natural state.