Unplanned Production can ruin your web development efforts, it's necessary to pre-plan while deploying and configuring the site. Check out essential tips to deployment best practices 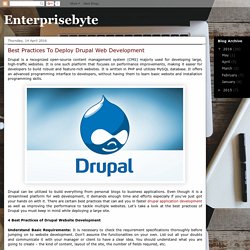 It is one such platform that focuses on performance improvements, making it easier for developers to build robust and feature-rich websites. It is written in PHP and utilizes MySQL database. It offers an advanced programming interface to developers, without having them to learn basic website and installation programming skills. Drupal can be utilized to build everything from personal blogs to business applications. Even though it is a streamlined platform for web development, it demands enough time and efforts especially if you’ve just got your hands on with it. 4 Best Practices of Drupal Website Development Understand Basic Requirements: It is necessary to check the requirement specifications thoroughly before jumping on to website development.

Use Version Control: The version control under the files you’re working on tracks the changes automatically. Deployment of multi-client application (best practices) Deployments Best Practices   Introduction This guide is aimed to help you better understand how to better deal with deployments in your development workflow and provide some best practices for deployments. 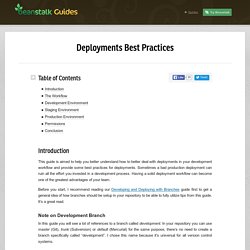 Sometimes a bad production deployment can ruin all the effort you invested in a development process. Having a solid deployment workflow can become one of the greatest advantages of your team. Before you start, I recommend reading our Developing and Deploying with Branches guide first to get a general idea of how branches should be setup in your repository to be able to fully utilize tips from this guide.

It’s a great read. Note on Development Branch In this guide you will see a lot of references to a branch called development. Web Development Disclaimer Our team makes web applications exclusively (Beanstalk and Postmark), so we don’t have much experience when it comes to deploying something that’s not based in the internet. The Workflow Developers work on bugs and features in separate branches. Deploy Web Applications on IAAS with Ansible - Cloud Academy Blog. 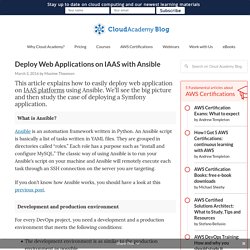 The development environment Provision the VM with Ansible Conclusion. 7 Application Deployment Best Practices - DZone DevOps. Someone just asked me to define “best practices” for a collection of application deployments. 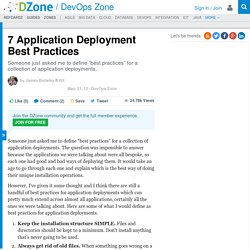 The question was impossible to answer because the applications we were talking about were all bespoke, so each one had good and bad ways of deploying them. It would take an age to go through each one and explain which is the best way of doing their unique installation operations. However, I’ve given it some thought and I think there are still a handful of best practices for application deployments which can pretty much extend across almost all applications, certainly all the ones we were talking about. Here are some of what I would define as best practices for application deployments. Keep the installation structure SIMPLE. As you can probably appreciate, this list is generally not written with installers (such as msi files) in mind, maybe I’ll look at that another time. Topics: java,devops,tips and tricks. 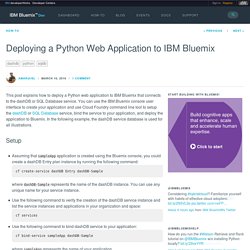 You can use the IBM Bluemix console user interface to create your application and use Cloud Foundry command line tool to setup the dashDB or SQL Database service, bind the service to your application, and deploy the application to Bluemix. In the following example, the dashDB service database is used for all illustrations. Setup Assuming that sampleApp application is created using the Bluemix console, you could create a dashDB Entry plan instance by running the following command: cf create-service dashDB Entry dashDB-Samplewhere dashDB-Sample represents the name of the dashDB instance.