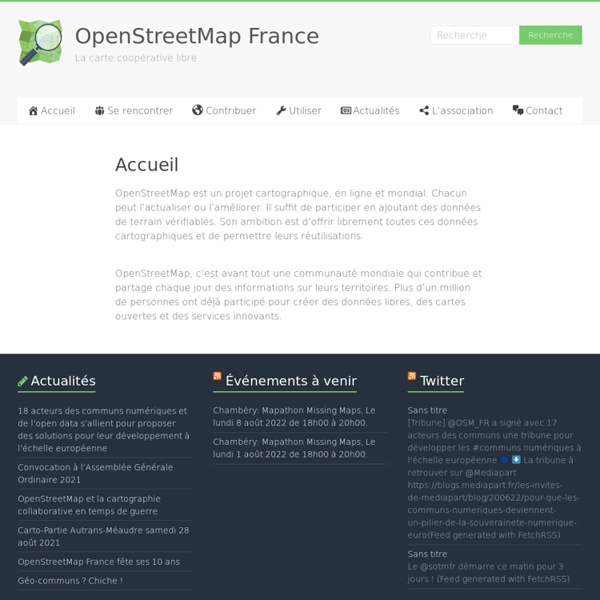 25 Professional and Incredibly Powerful Photoshop Plugins Freebies are awesome, and design blogs are full of them, but sometimes you need a professional tool to handle professional tasks. There are a wealth of extremely powerful and high quality photoshop tools that can dramatically improve your workflow and are worth every penny you have to spend to get them. Today we’ll look at a number of the best tools available for making color adjustments, adjusting focus, enlarging images, transforming layers in 3D, reducing noise, creating textures, applying complex masks, and even taking that PSD into full-blown HTML. [site de carto] explication de prettymaps prettymaps is an experimental map from Stamen Design. It is an interactive map composed of multiple freely available, community-generated data sources: All the Flickr shapefiles rendered as a semi-transparent white ground on top of which all the other layers are displayed. Urban areas from Natural Earth both as a standalone layer and combined with Flickr shapefiles for cities and neighbourhoods.

[site] Cartographie esthétique prettymaps The short version is simply that there's a huge amount of data being sent across the network and then processed and finally rendered by your computer. We've looked at the logs for the machine hosting prettymaps and it seems happy enough serving all the requests that people are sending it. The other reason is that the data hasn't been compressed or optimized as much it could be. Creativity Tools Skip to main content Create interactive lessons using any digital content including wikis with our free sister product TES Teach. Get it on the web or iPad!

Better web cartography with dot density maps and new tools « News Apps Blog Between Brian, Joe, and myself there hasn’t been a time in the last six months where at least one of us wasn’t working with census data. Back in February we attacked the less-detailed (redistricting) data for print and the web. In April, May, and June we contributed to a joint effort with an esteemed cadre of news nerds to develop census.ire.org, a site intended to make it easier for journalists to report from census data. And to prepare for this recent release, we even spent a week hacking near-complete prototype maps using data that the census had already released, Kings County, New York.

Image Tools Skip to main content Create interactive lessons using any digital content including wikis with our free sister product TES Teach. Get it on the web or iPad! Creating Funny Big Head Characters in Photoshop This tutorial is inspired by the Red Queen character in the new “Alice in the Wonderland” movie, where she has a big head and small body. We will be looking at using Liquify tool to achieve that sort of caricature effect. Preview of Final Image Download “Two brides fight and shout at each other” from ShutterStock, or you may use other images of similar model poses. Extract the bride on the right using the Layer Mask tool.

2010 Census: Children less than five years old in Chicagoland By Chris Groskopf and Brian Boyer Aug. 7, 2011 This map shows the distribution of children less than five years old in Cook, Lake, Kane, McHenry, Kankakee, Kendall and DuPage counties as reported by the 2010 U.S. Census. Each dot represents a single child.* Research Tools Skip to main content Create interactive lessons using any digital content including wikis with our free sister product TES Teach. Get it on the web or iPad! guest