Writerisms and other Sins: A Writer’s Shortcut to Stronger Writing 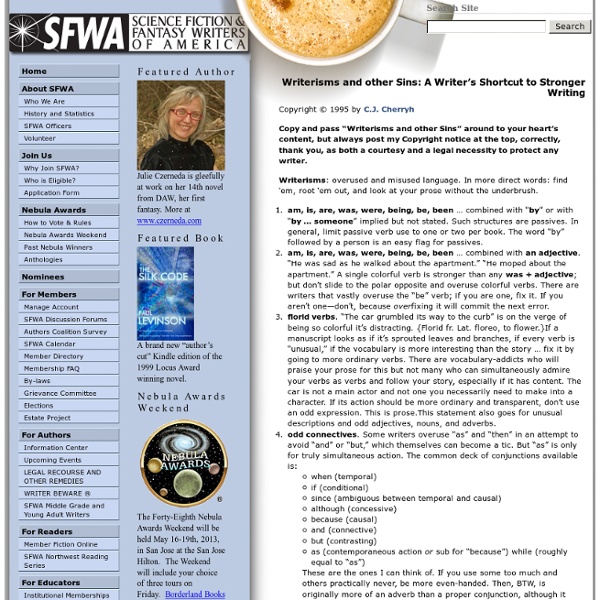 25 Insights on Becoming a Better Writer When George Plimpton asked Ernest Hemingway what the best training for an aspiring writer would be in a 1954 interview, Hem replied, “Let’s say that he should go out and hang himself because he finds that writing well is impossibly difficult. Then he should be cut down without mercy and forced by his own self to write as well as he can for the rest of his life. At least he will have the story of the hanging to commence with.” 54 Tips For Writers, From Writers The entire writing process is fraught with perils. Many writers would argue that the hardest part of writing is beginning. When asked what was the most frightening thing he had ever encountered, novelist Ernest Hemingway said, “A blank sheet of paper.”

25 Creative Writing Prompts Posted by Melissa Donovan on October 21, 2014 · 25 creative writing prompts to inspire and motivate you. Don’t you just hate writer’s block? Some say it’s a disease that only creative workers succumb to. 50 Incorrect Pronunciations That You Should Avoid by Maeve Maddox Fred Astaire drew laughs back in the Thirties with his song “Let’s Call the Whole Thing Off” in which the lovers can’t agree on the pronunciation of words like either, neither, and tomato. On a personal level, I cringe when I hear someone sound the “t” in often or pronounce pecan with a short “a,” but I have to acknowledge that both these pronunciations are widely accepted alternate pronunciations that can be justified by the spelling. Alternate pronunciations, however, are a different matter from out-and-out mispronunciations. The latter, no matter how common, are incorrect, either because of the spelling that indicates another pronunciation, or because of what is widely agreed upon to be conventional usage. Word of caution: I’m writing from an American perspective.

mental_floss Blog & How to Write Movie Scenes Ever wondered how screenwriters do their thing? Lots of people have, and there's a whole genre of books out there devoted to helping up-and-comers understand the arcane art of movie-writing. Despite all the screenwriting panels and workshops and books and DVD commentaries in the world -- all the billions of words printed about screenwriting and how it's done -- when it comes down to it, most writers are relatively private about the nitty-gritty of their process. That's why I love reading John August's blog. August's credits include Big Fish, Go, Charlie and the Chocolate Factory, Prince of Persia and Corpse Bride, among others (so he's definitely not one of the many screenwriting book authors or teachers with flimsy/ancient credits) and one of the best things about his blog are the videos he's been making. They're essentially long-form screen captures of John writing or editing scenes, and talking as he does it.

Eight Secrets Which Writers Won’t Tell You Image from Flickr by Lazurite This is not particularly relevant to the post, but I’m getting an awful lot of comments telling me, often a little snarkily, “it’s ‘THAT’ not ‘WHICH’”. The “don’t use which for restrictive clauses” rule comes (as far as I can tell) from Strunk and White. Plenty of authors, including Austen, have used “which” exactly as I use it in the title. It’s very commonly used like this here in England, so I’m guessing my comments are coming from US readers. There was never a period in the history of English when “which” at the beginning of a restrictive relative clause was an error.

: Quick and Dirty Tips ™ Mignon Fogarty is the founder of the Quick and Dirty Tips network and creator of Grammar Girl, which has been named one of Writer's Digest's 101 best websites for writers multiple times. The Grammar Girl podcast has also won Best Education Podcast multiple times in the Podcast Awards, and Mignon is an inductee in the Podcasting Hall of Fame. Mignon is the author of the New York Times best-seller "Grammar Girl's Quick and Dirty Tips for Better Writing" and six other books on writing. She has appeared as a guest on the "Oprah Winfrey Show" and the "Today Show" and has been featured in the New York Times, Business Week, the Washington Post, USA Today, CNN.com, and more. She was previously the chair of media entrepreneurship in the Reynolds School of Journalism in Reno, NV. She hates the phrase "grammar nazi" and loves the word "kerfuffle."