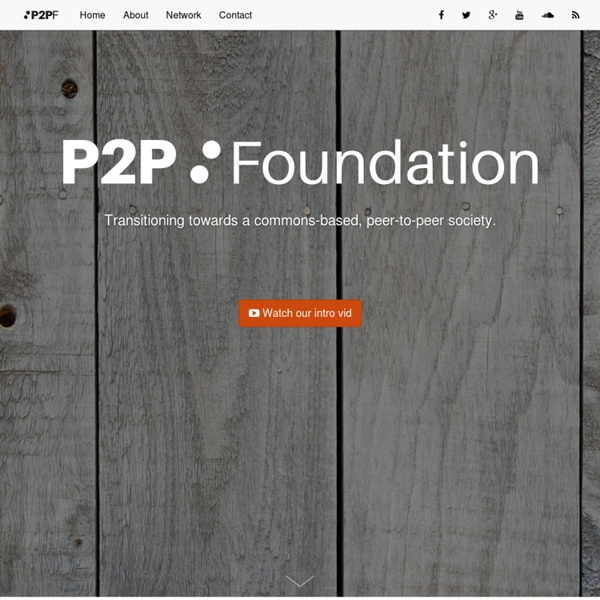 "In order to change an existing paradigm you do not struggle to try and change the problematic model. You create a new model and make the old one obsolete. That, in essence, is the higher service to which we are all being called." ~ Buckminster Fuller ~ Welcome to the P2P Foundation The P2P Foundation is an international organization focused on studying, researching, documenting and promoting peer to peer practices in a very broad sense.

European Commission preparing for EU-US trade talks: 119 meetings with industry lobbyists Negotiations on an EU-US ‘free trade’ agreement (Transatlantic Trade and Investment Partnership, TTIP) started in July this year amid strong controversy and public concern about the impacts such an agreement could have on environmental regulations, food standards, data protection and other issues. The European Commission, which represents the EU in the negotiations, has reacted with a propaganda offensive that includes a Q&A website full of misleading claims about the TTIP talks and a ‘@EU_TTIP_team’ that counters critical messages on twitter. In mid-July, the Commission made a huge deal out of the civil society dialogue it had organised in Brussels on the TTIP talks, posting dozens of tweets about the event, praising the “interesting discussion” on issues such as “the environment, transparency, development” with “as many questions from NGOs [...] than there were from Industry”.

Britain's first 'energy positive' house opens in Wales Britain’s first low cost ‘energy positive’ house, which can generate more electricity than its occupants will use, opens on Thursday despite George Osborne axing plans to make housebuilders meet tough low carbon housing targets from next year. The modest three-bedroom house built in just 16 weeks on an industrial estate outside Bridgend in Wales cost just £125,000 to build and, said its Cardiff University designers, will let occupants use the sun to pay the rent. Using batteries to store the electricity which it generates from the solar panels that function as the roof, and having massive amounts of insulation to reduce energy use in winter months, it should be able to export electricity to the national grid for eight months of the year. These were scrapped last week by the Conservative government on the the grounds that housebuilders should not be over-regulated. “It was disappointing to see Osborne scrap the plans,” said Jones.

Freeworlder.org - Being a Freeworlder (Press Release July 2013) Details Published: Wednesday, 10 July 2013 09:16 Written by Colin Turner Beyond greener pastures - Sanctuary Magazine Issue 33Words: Emily Braham Sanctuary takes a look at some leading examples of low carbon, community-focused developments in suburban and regional Australia. Several progressive suburban and regional developments with a genuine commitment to better design and sustainability outcomes are seeking mainstream appeal. Seven Ways Sharing Can Make You Happy Though it might seem that there’s not much in the way of silver linings in these dark economic times, there is at least one: as people learn to make do with less, they are discovering the many benefits of sharing. Car-sharing, babysitting cooperatives, and tool lending are just a few of the many creative ways people are eschewing ownership and learning to share the goods and services they need. But sharing can do more than just save you a buck. New psychological research suggests that sharing fosters trust and cooperation in the community and contributes to personal well-being. Here are some of the ways that sharing can boost your happiness levels and help your community thrive: 1.

How To Make Your Own Clay Paint Clay paint is very easy to make and can lend even drywall a very earthen appearance. As natural builder, clay paint is a great way to give color to a home. For some reason, it’s taken me a long time to try mixing up and using a clay paint (also known as a clay alis). How to Make HUGE Bubbles For best viewing click the gear in the bottom right corner of the video and change the quality to 720p! I had more fun making this video than any I can remember in the recent past. Making giant bubbles may turn into an ongoing hobby. Some of my younger cousins have certainly enjoyed it as well! The bubbles seen in this video all used the three part bubble mix that I show being made. Trans-Pacific Partnership undermines health system - Opinion The Trans-Pacific Partnership (TPP) is a deal that is being secretly negotiated by the White House, with the help of more than 600 corporate advisers and Pacific Rim nations, including Australia, Brunei, Canada, Chile, Japan, Malaysia, Mexico, New Zealand, Peru, Singapore and Vietnam. While the TPP is being called a trade agreement, the US already has trade agreements covering 90 percent of the GDP of the countries involved in the talks. Instead, the TPP is a major power grab by large corporations. The text of the TPP includes 29 chapters, only five of which are about trade. The remaining chapters are focused on changes that multinational corporations have not been able to pass in Congress such as restrictions on internet privacy, increased patent protections, greater access to litigation and further financial deregulation.

Co-creation, user-generated content, DIY advertising and more! CUSTOMER-MADE: time to tap into THE GLOBAL BRAIN! Last updated: May 2006 | Let’s get this out of the way once and for all: trends are not one-off coining affairs. Some trends are worth tracking for years and years, especially if they represent a radically new definition of what constitutes value to consumers. INFOLUST is one of them. Stop the Net Grab Stop the Net Grab To voting members of the World Conference on International Telecommunications: I strongly oppose any attempt to undermine the fundamental freedoms of citizens online.