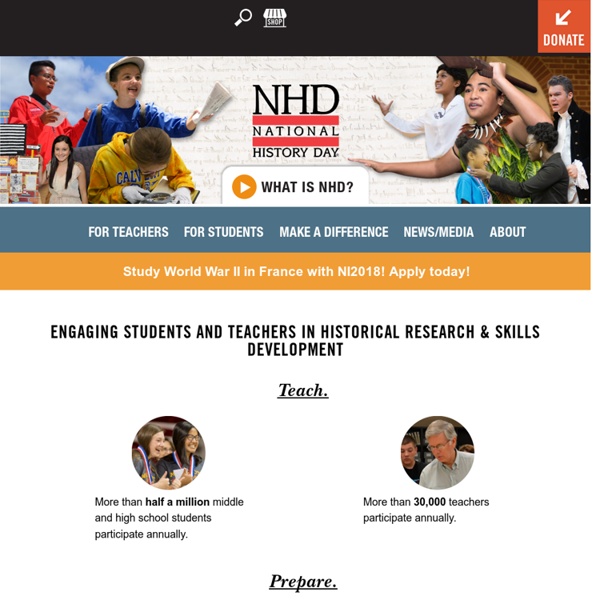 Rules What Is National History Day? NHD, a non-profit education organization based in College Park, Maryland, offers year-long academic programs that engage over half a million middle- and high-school students around the world annually in conducting and presenting original research on historical topics. Since 1974, NHD has continuously improved history education by providing professional development opportunities and curriculum materials for educators. 2014 - 2015 Contest Rulebook Click here to download the Contest Rulebook in English Click here to download the Contest Rulebook in Spanish America in Class Reagan and the Fall of the Berlin Wall For years, it has been the fashion in many ideological precincts to argue the collapse of the Soviet Union -- at more or less the moment it disintegrated -- was due almost entirely to Communism's structural weaknesses, and not to anything the West may have done to hasten its demise. In this view, while the two factions may have been at war for decades, the final result was not victory for one side so much as abdication by the other. This misreading of history unfortunately is motivated most often by a desire to avoid giving President Reagan the credit he deserves for being one of the few Western leaders (Prime Minister Thatcher being a notable exception) to properly understand not just the weaknesses of the Communist system, but also how they could be exploited to hasten the demise of the Soviet Union and bring freedom to millions around the world. Get exclusive insider information from Heritage experts delivered straight to your inbox each week. Subscribe to The Agenda >>

Reading Like A Historian The Reading Like a Historian curriculum engages students in historical inquiry. Each lesson revolves around a central historical question and features sets of primary documents designed for groups of students with diverse reading skills and abilities. This curriculum teaches students how to investigate historical questions by employing reading strategies such as sourcing, contextualizing, corroborating, and close reading. Instead of memorizing historical facts, students evaluate the trustworthiness of multiple perspectives on historical issues. They learn to make historical claims backed by documentary evidence. How do I use these lessons in my classroom? The 91 lessons in the U.S. curriculum, 41 lessons of the world curriculum, and the 5 lessons in the introduction to historical thinking unit can be taught in succession. 1) Establish relevant background knowledge and pose the central historical question. *Note: United Streaming requires a subscription to Discovery Education. Of course!

Reagan challenges Gorbachev to tear down the Berlin Wall - Jun 12, 1987 Also on this day Lead Story On this day in 1987, in one of his most famous Cold War speeches, President Ronald Reagan challenges Soviet Leader Mikhail Gorbachev to “tear down” the Berlin Wall, a symbol of the repressive Communist era in a divided Germany. In 1945, following Germany’s defeat in World War II, the nation’s capital,... American Revolution On this day in 1776, the Virginia Convention, assembled in Williamsburg, unanimously adopts George Mason’s declaration of rights. Automotive On this day in 1940, Edsel Ford telephones William Knudsen of the U.S. Civil War Confederate General J.E.B. After suffering a devastating defeat on June 3, Union General Ulysses S. Crime Nicole Brown Simpson, famous football player O.J. Disaster On this day in 1897, a powerful earthquake in Assam, India, triggers deadly landslides and waves, killing more than 1,500 people. General Interest Indira Gandhi, the prime minister of India, is found guilty of electoral corruption in her successful 1971 campaign.

History Globe In 1606, some 105 adventurers set off from England to try and establish the first permanent English colony in the New World. They settled in what is now the state of Virginia and called their colony first James Fort, and then James Towne, in honor of James I, the King of England. The early years of the colony were nearly a total disaster. You are the Captain of the Jamestown Colony: Can you do any better than the real colonists? Scoring Factors: After you make all your decisions, you will receive a report on the state of your colony based on these factors: Food: How well can you provide it for your colonists? Make History: You will get to compare your colony to the historical Jamestown at the end. Good luck and Godspeed!

History Conflicts The Fall Of The Berlin Wall - History Conflicts The Berlin Wall The Berlin Wall was an obstacle that divided East Germany from West Germany between 1961 and 1989, it was raised by the German Democratic Republic (GDR, East Germany) starting on 13 August 1961. It completely separated (by land) West Berlin from surrounding East Germany and from East Berlin until it was demolished in November 1989. Its destruction officially began on the 13th of June 1990 and was finished in 1992. The Iron Curtain Iron Curtain, the ideological, military, and political barrier established by the Soviet Union following World War II to isolate itself and its allies from eastern and central Europe from direct communication with the western countries and other noncommunist countries. The fall In 1989, a political chain of events occurred in the Eastern Europe, starting with the lifting of the Soviet Bloc’s power systems and the degradation of political power in the pro-Soviet governments in neighboring Hungary and Poland. Enjoyed reading this article?

14 Special Google Searches With Instant Answers Google can do more than display lists of websites – Google will give you quick answers to many special searches. While Google isn’t quite as advanced as Wolfram Alpha, it has quite a few tricks up its sleeve. We’ve also covered searching Google like a pro by learning the Google search operators – if you want to master Google, be sure to learn those. Calculator You can use Google as a calculator – just type in a quick calculation and Google will provide an answer. Unit Conversions Google can also convert between a variety of units. As with the calculator, the unit conversion tool is clickable. You can also combine unit conversations and math. Currency Conversions Google can also do currency conversions for you. Your IP Address You can determine your current public IP address by typing what is my ip into Google – or just search for my ip. Weather Sunrise and Sunset You can also view the sunrise or sunset times for a location by typing sunrise location or sunset location. Times Package Tracking Data

The Khrushchev Connection: Who Ordered the Construction of the Berlin Wall? They met in Stalingrad, where they fought on the same side in 1942. One of them, the son of a miner from Ukraine, organized the city's defenses against the German Wehrmacht forces, while the other, a German exile, used a bullhorn to encourage infantrymen to change sides. This much is certain, and it is also certain that the two men -- the impulsive Kremlin dictator Nikita Khrushchev and the calculating founder of the German Democratic Republic, Walter Ulbricht -- were never overly fond of each other. Nevertheless, during the decade in which they simultaneously shaped the fates of their respective countries, Khrushchev and Ulbricht were close allies. But which of the two men was responsible for the construction of the Berlin Wall on Aug. 13, 1961? Never before had a regime locked up its own population. From then on, anyone who wished to leave East Germany was risking his or her life. Khrushchev, at any rate, stepped up the pace.