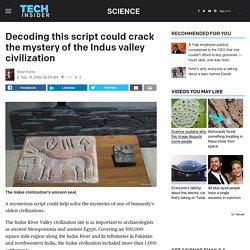 A mysterious script could help solve the mysteries of one of humanity's oldest civilizations. The Indus River Valley civilization site is as important to archaeologists as ancient Mesopotamia and ancient Egypt. Covering an 500,000 square mile region along the Indus River and its tributaries in Pakistan and northwestern India, the Indus civilization included more than 1,000 settlements. Most of these settlements were villages, some were towns, and at least five could be considered cities during the civilization's peak from 2600-1900 B.C. The largest of these cities were Mohenjo-daro and Harappa, which were marvels for their time.

The cities had complex street planning, covered sewer systems, and the world's oldest toilets. While they weren't warmongering, they weren't cut off from others either. Saqib QayyumAn archaeological dig at Mohenjo-daro near Larkana, Pakistan Matija PodhraškiThe Rosetta Stone on display at the British Museum. Ancient India - Ancient Civilizations for Kids. 50 or 60 million years ago India slowly smashed into Asia and formed the Himalaya and Hindu Kush Mountains that nearly block off India from the surrounding area. 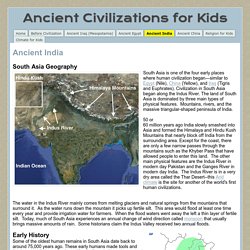 Except for the coast, there are only a few narrow passes through the mountains such as the Khyber Pass that have allowed people to enter this land. The other main physical features are the Indus River in modern day Pakistan and the Ganges River in modern day India. The Indus River is in a very dry area called the Thar Desert--this Arid climate is the site for another of the world's first human civilizations. Discovery of Ancient Indian Daggers may push back Start of Iron Age by Hundreds of Years. Indian archaeologists say recent dagger discoveries at ancient sites in Hyderabad have pushed the Iron Age in India back to at least 2200 BC—around 1,000 years before the rest of the world. 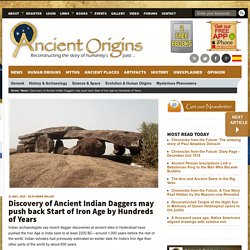 Indian scholars had previously estimated an earlier date for India’s Iron Age than other parts of the world by about 600 years. The Times of India reports that archaeologists at the University of Hyderabad campus have found small blades and knives that they dated to between 2400 and 1800 BC. They were excavated next to earthen pots, most of which were mangled. About 10 of the pots were in good enough condition for archaeologists to learn somewhat about the art of that time and place. "The implements that were found were tested at the National Geophysical Research Institute (NGRI) using a method called Optically Simulated Luminescence (OSL). “In India, it was understood that the Iron Age came into being around 1800 BC in the Lahuradeva site in Uttar Pradesh,” said Professor Rao. 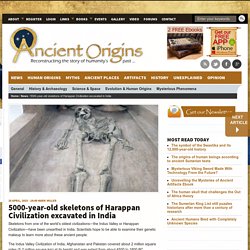 Scientists hope to be able to examine their genetic makeup to learn more about these ancient people. The Indus Valley Civilization of India, Afghanistan and Pakistan covered about 2 million square miles (5.2 million square km) at its height and was extant from about 4500 to 1800 BC. The skeletons were dated to about 5,000 years old and were unearthed in a cemetery in Rakhigarhi, a city of the ancient civilization. Harappan-era skeletons found in Haryana. Posted by TANNArchaeoHeritage, Archaeology, Asia, Breakingnews, India, South Asia5:00 PM Four human skeletons, believed to be 5,000 years old, have been found by archaeologists from the site of Harappan civilisation at Rakhi Garhi village near here. 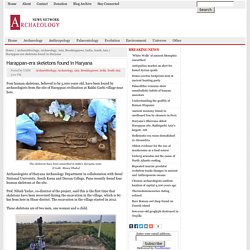 Archaeologists of Haryana Archaeology Department in collaboration with Seoul National University, South Korea and Deccan College, Pune recently found four human skeletons at the site. Prof. Nilesh Yadav, co-director of the project, said this is the first time that skeletons have been recovered during the excavation in the village, which is 60 km from here in Hisar district. The excavation in the village started in 2012. These skeletons are of two men, one woman and a child. Exploring the Indus Valley’s Secrets. The oldest archaeologically attested civilization in South Asia continues to charm the world. 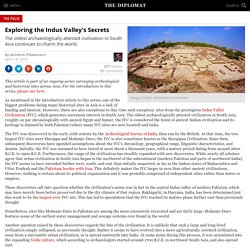 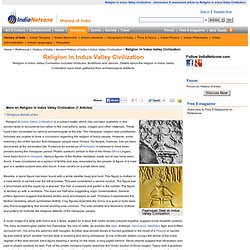 These have been excavated by various archaeologists at the site. The Harappan religion was polytheistic. Scholars are unable to draw a conclusion regarding the religion of Indus people. However, some historians are of the opinion that Harappan people were Hindus. No temple, however, has yet been discovered at the excavated site. Besides, a stone figure has been found with a white steatite head and bust. A nude image of a deity with horns and 3 faces, seated on a stool with heals closely pressed together suggest some ritualistic posture. The Religion of the Indus Valley Civilization.

By Jayaram V We have very little information about the religious life of the Indus valley people. 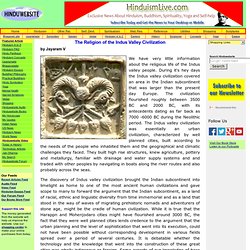 During it's hey days the Indus valley civilization covered an area in the Indian subcontinent that was larger than the present day Europe. The civilization flourished roughly between 3500 BC and 2000 BC, with its antecedents dating as far back as 7000 -6000 BC during the Neolithic period. The Indus valley civilization was essentially an urban civilization, characterized by well planned cities, built according to the needs of the people who inhabited them and the geographical and climatic challenges they faced. They built high rise structures, knew agriculture, pottery and metallurgy, familiar with drainage and water supply systems and and traded with other peoples by navigating in boats along the river routes and also probably across the seas. Religion in the Indus Valley Civilization. Clay figures of the Mother Goddess as the symbol of fertility have been found- these were worshipped by the people. 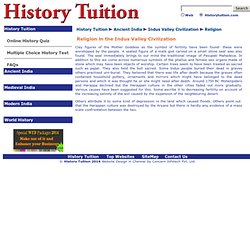 A seated figure of a male god carved on a small stone seal was also found. The seal immediately brings to our mind the traditional image of Pasupati Mahadeva. In addition to this we come across numerous symbols of the phallus and female sex organs made of stone which may have been objects of worship. Certain trees seem to have been treated as sacred such as papal. They also held the bull sacred. Indus Valley Gods - Religion. The Religion of Harappa. As is the case with the civilizations of the ancient world, religion must have played an important role in the lives of Harappan people. 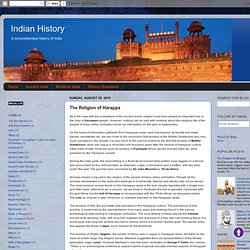 However, nothing can be said with certainty about the religious life of the people of Indus valley civilization since our information on the topic is fragmentary. On the basis of information gathered from Harappan seals, seal impressions, terracotta and metal figures, cemeteries, etc, we can come to the conclusion that worship of the Mother Goddesses was very much prevalent in the society. Early Civilization in the Indus Valley. Aryans probably used the Khyber Pass to cross the mountains during their Indian invasion. Located in present day Pakistan, the pass is about 16 yards wide at its narrowest point. The phrase "early civilizations" usually conjures up images of Egypt and Mesopotamia, and their pyramids, mummies, and golden tombs.

But in the 1920s, a huge discovery in South Asia proved that Egypt and Mesopotamia were not the only "early civilizations. " In the vast Indus River plains (located in what is today Pakistan and western India), under layers of land and mounds of dirt, archaeologists discovered the remains of a 4,600 year-old city. 200-Year Drought Doomed Indus Valley Civilization.

The decline of Bronze-Age civilizations in Egypt, Greece and Mesopotamia has been attributed to a long-term drought that began around 2000 BC. Now paleoclimatologists propose that a similar fate was followed by the enigmatic Indus Valley Civilization, at about the same time. Based on isotope data from the sediment of an ancient lake, the researchers suggest that the monsoon cycle, which is vital to the livelihood of all of South Asia, essentially stopped there for as long as two centuries. The Indus Valley, in present Pakistan and northwest India, was home to a civilization also known as the Harappan Civilization. It was characterized by large, well-planned cities with advanced municipal sanitation systems and a script that has never been deciphered. But the Harappans seemed to slowly lose their urban cohesion, and their cities were gradually abandoned. The Harappan Civilization: An Attempt at Unity and Peace. Located in the Indus Valley on the western border of India, the Harappan civilization is one of the largest ancient civilizations that has “flown under the radar” as very few people have heard of it.

It existed around 2200-1900 BC and was primarily an agricultural and mercantile community, focusing on farm and trade.[1] This civilization has several aspects that set it apart from the other civilizations of its day such as:ArchitectureUnityReligionBurialsRelative peaceThere are two major Harappan city ruins that provide a great deal of insight into the Harappan way of life as well as displaying the advanced and well organized Harappan architecture. Organized Architecture The architecture of the Harappan civilization was unique for its day.

The cities were designed in an extremely uniform and organized manner on a grand scale. It appears that the engineers planned the city before they built it, resulting in much more organization than is typically seen in ancient cities. ECONOMICS OF THE INDUS VALLEY CIVILIZATION. How did this civilization make its living? Like the older civilizations proceeding Indus in Egypt and Mesopotamia, these ancient people farmed. The people of Indus prospered on the foundations of an agriculture based system of irrigation and fertility, maintained by silt-bearing floods (Hawkes 1973: 267). Wheat and six-row barley were grown, as were melon seeds, oil crops like sesame and mustard, and dates (petrified dates have been found in the excavation of the Valley). As for vegetables, the only apparent source was the field pea. The Harappan Civilization by Tarini Carr. Some several thousand years ago there once thrived a civilization in the Indus Valley.

Indus Valley Civilization. BBC The Story of India - Episode 1 - Beginnings. The Story of India - Photo Gallery. Moenjodaro - Testimony to a great civilization. Pre-harappan ancient city found part 1. Indus Civilization Sites. Gola Dhoro (also known as Bagasara) is a site in Gujarat, India, excavated from 1996 to 2004. A distinctive ancient Indus seal was found there, as well as extensive evidence for the sudden evacuation of this tiny town with well stocked manufacturing facilities. Daimabad is in Maharashtra near Bombay. Discovered in 1958, it is a controversial site. Some suggest that the pottery and single shard with ancient Indus signs on it is definitive of Harappan settlement; others say the evidence is not sufficient. A unique hoard of exquisite bronze chariots and animals that may or may not be of Indus Civilization style was also found here.