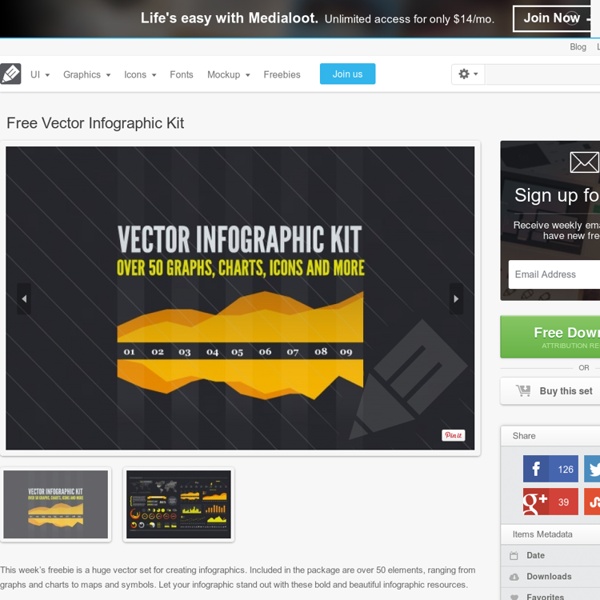 This week’s freebie is a huge vector set for creating infographics. Included in the package are over 50 elements, ranging from graphs and charts to maps and symbols. Let your infographic stand out with these bold and beautiful infographic resources. In the download the filetypes are AI, EPS and SVG so you can use this kit at any scale, easily edit the color scheme, and the data points. Enjoy! Free License Feel free to download and use this item for both personal and commercial projects with attribution back to MediaLoot. Attribution is required for free items. More from Graphic Art » Vectors

9 Ways You Can Improve Your Infographic Pitches to Blogs & Websites Over the past year, I’ve worked on approximately 20 different infographics for a single client. One of the most frustrating things about the process has been the unevenness of the response. Even if we do everything seemingly right, an infographic might not take off. After a string of disappointing infographics, I decided to go back over every step and figure out what we had missed.

Online Charts Builder Hohli Online Charts Builder New version: Try new version of Charts Builder, it based on new Google Charts API In a recent interview, Jeffrey Katzenberg described his first day at Disney as the newly appointed head of The Walt Disney Studios. The equally new Disney CEO, Michael Eisner, gave him a simple, unambiguous mandate: fix animation at Disney. Although a veteran in the film business, Katzenberg had no experience with animation and little appetite for it. Disney long-timers, however, informed him that Walt Disney had left extensive notes and audio recordings concerning his experiences making animation, which were stored in the Disney archives. Looking through these records, he discovered that Walt had effectively “left the recipe for making a Disney animated movie.” Katzenberg proceeded to apply this recipe with remarkable success, adding on the way some extra ingredients of his own.

50 Great Examples of Data Visualization Wrapping your brain around data online can be challenging, especially when dealing with huge volumes of information. And trying to find related content can also be difficult, depending on what data you’re looking for. But data visualizations can make all of that much easier, allowing you to see the concepts that you’re learning about in a more interesting, and often more useful manner. Below are 50 of the best data visualizations and tools for creating your own visualizations out there, covering everything from Digg activity to network connectivity to what’s currently happening on Twitter. Music, Movies and Other Media

4 Simple Tools for Creating an Infographic Resume This post originally appeared on the American Express OPEN Forum, where Mashable regularly contributes articles about leveraging social media and technology in small business. As a freelancer or job seeker, it is important to have a resume that stands out among the rest — one of the more visually pleasing options on the market today is the infographic resume. An infographic resume enables a job seeker to better visualize his or her career history, education and skills. Unfortunately, not everyone is a graphic designer, and whipping up a professional-looking infographic resume can be a difficult task for the technically unskilled job seeker. InfoGraphic Designs: Overview, Examples and Best Practices Information graphics or infographics are visual representations of information, data or knowledge. These graphics are used where complex information needs to be explained quickly and clearly, such as in signs, maps, journalism, technical writing, and education. They are also used extensively as tools by computer scientists, mathematicians, and statisticians to ease the process of developing and communicating conceptual information.

Free Infographics Design Vector Elements This is the big list of Vector Elements which are great for infographics designing. Info-graphics are graphic visualization and representations of data and information. Designers using graphic elements to explain complex information, numbers or data in quick and effective manner. Network visualization: mapping Shakespeare's tragedies Are Shakespeare’s tragedies all structured in the same way? Are the characters rather isolated, grouped, all connected? Narration, even fictional, contains a network of interacting characters. Constituting a well defined corpus, the eleven Shakespearean tragedies can easily be compared: We propose here a network visualization in which each character is represented by a node connected with the characters that appear in the same scenes.

The top 20 data visualisation tools One of the most common questions I get asked is how to get started with data visualisations. Beyond following blogs, you need to practise – and to practise, you need to understand the tools available. In this article, I want to introduce you to 20 different tools for creating visualisations: from simple charts to complex graphs, maps and infographics. Almost everything here is available for free, and some you have probably installed already. Advertisement Entry-level tools

10 Awesome Free Tools To Make Infographics Advertisement Who can resist a colourful, thoughtful venn diagram anyway? In terms of blogging success, infographics are far more likely to be shared than your average blog post. This means more eyeballs on your important information, more people rallying for your cause, more backlinks and more visits to your blog. In short, a quality infographic done well could be what your blog needs right now. Designing An Infographic