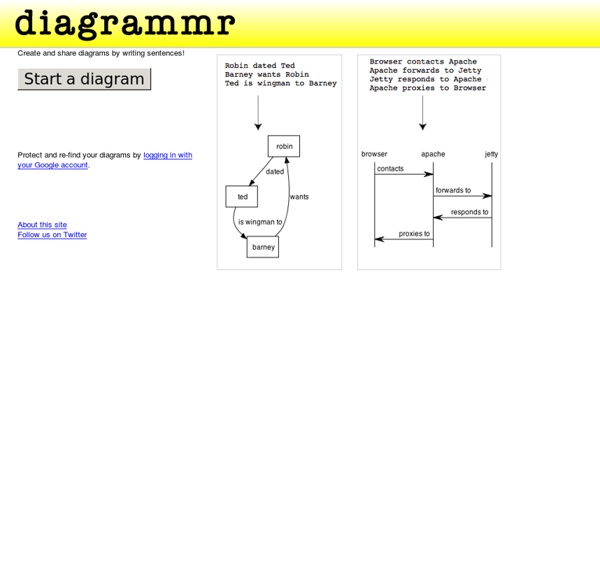 Just another WordPress site  indiemapper is free - Axis Maps Blog by David Heyman on January 5, 2012 With the start of 2012, we’ve decided to make indiemapper free to use. Since indiemapper launched in 2010, our business has grown and changed to where supporting and maintaining indiemapper is no longer a major part of what we do at Axis Maps every day. We’re making indiemapper free so that it can continue to exist as a useful tool for map-makers while freeing us up to be as awesome as possible at our custom cartography business. To allow us to give it away for free, we’re scaling back what indiemapper does. We’ve removed all account-based online functionality including usernames / passwords, cloud storage, and map sharing.

TikZ and PGF examples Home > TikZ > Examples TikZ and PGF examples Welcome to the PGF and TikZ examples gallery. Browse by: Features | Tags | Technical areas | Non-technical areas |Authors Classification of Emotions Psychologists have yet to fully tackle the question “How many emotions do we have?” Part of the difficulty is because our experiences are so complex and involve so many different factors, so distinguishing one emotion from another is a lot like drawing lines of sand in the desert. It can be hard to determine where one emotions ends or another begins.

MentorMob - Great Minds Share Alike - MentorMob Statistical Visualization For his book The Visual Miscellaneum, David McCandless, along with Lee Byron, had a look at breakups on Facebook, according to status updates. They looked for the phrase "we broke up because" in status updates, and then graphed the frequencies over time. Why they couldn't just look at updates to relationship status, I'm not sure. Notice the peak leading up to the holiday season and spring cleaning. Then there's the people who think it's a funny April Fool's joke to say the broke up with their significant other. The Ultimate Guide to Mind Maps and Mind Mapping Tools What Are Mind Maps? Mind Maps are a way of visually organizing information that help you identify and understand the structure of a subject at a glance. They allow you to create logical connections between concepts that show how pieces of information fit together, providing you with a “map” of your ideas, processes, and concepts. You can use mind maps for many things such as outlining presentations, ebooks, and content plans, engaging in logical problem solving, and mapping out user experiences online and in the real world.

Infosthetics: the beauty of data visualization The beauty of information aesthetics: Visual Poetry 06 by Boris Müller. " Boris Müller's newest 'visual theme' for a annual international German literature festival. 2006 the theme consisted of beautiful visualizations of the poetry texts themselves. Each word corresponded to a numerical code by adding the alphabetical values of its letters together. This number was mapped onto the position on a circle, and marked by a red dot. Gray lines connect the dots in the sequence the words appear in the poem. The diameter of the circle on which the dots are placed is decided by the length of the poem," Andrew explains . Andrew Vande Moere digs deep in his information channels to gather the most interesting forms of data visualization.

Concept map - Wikipedia, the free encyclopedia - Iceweasel An Electricity Concept Map, an example of a concept map A concept map or conceptual diagram is a diagram that depicts suggested relationships between concepts.[1] It is a graphical tool that designers, engineers, technical writers, and others use to organize and structure knowledge. A concept map typically represents ideas and information as boxes or circles, which it connects with labeled arrows in a downward-branching hierarchical structure. The relationship between concepts can be articulated in linking phrases such as causes, requires, or contributes to.[2] Overview[edit] A concept map is a way of representing relationships between ideas, images, or words in the same way that a sentence diagram represents the grammar of a sentence, a road map represents the locations of highways and towns, and a circuit diagram represents the workings of an electrical appliance.

Yahoo Pipes Code Generator (Python): Pipe2Py Wouldn’t it be nice if you coud use Yahoo Pipes as a visual editor for generating your own feed powered applications running on your own server? Now you can… One of the concerns occasionally raised around Yahoo Pipes (other than the stability and responsiveness issues) relates to the dependence that results on the Yahoo pipes platform from creating a pipe. Where a pipe is used to construct an information feed that may get published on an “official” web page, users need to feel that content will always be being fed through the pipe, not just when when Pipes feels like it. (Actually, I think the Pipes backend is reasonably stable, it’s just the front end editor/GUI that has its moments…) Greg Gaughan picked up the challenge and came up with a Python code generator for doing just that, written in Python.

Just in Case – Saving Your Yahoo Pipes… Yahoo is laying off again, so just in case, if you’re a user of Yahoo Pipes, it may be worth exporting the “source code” of your pipes or any pipes that you make frequent use of in case the Yahoo Pipes service gets cut. Why? Well, a little known fact about Yahoo pipes is that you can get hold of a JSON representation from a pipe that describes how the pipe is constructed… …and some time ago, Greg Gaughan started working on a script that allows you to “compile” these descriptions of your Yahoo Pipes into Python programming code that can be run as a standalone programme on your own server: Pipe2Py.