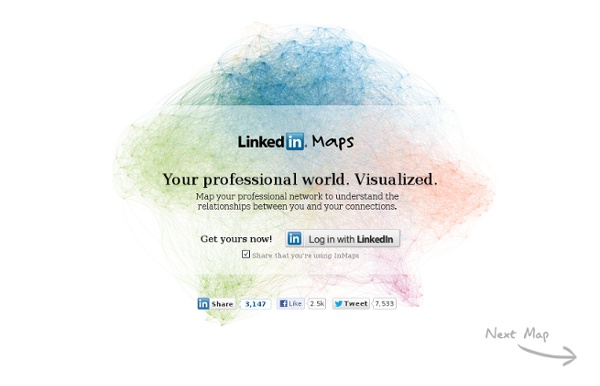 Free textures for your next web project. Nothing like a field of beautiful flowers. Download Download These lovely water-colorful dots will make your designs pop. Download More leaves from another angle. 6 Tips for Running Promotions Within Facebook’s Guidelines Promotions are an increasingly popular way for marketers to reach Facebook’s 400 million monthly active users. After all, if you see an item in your news feed about a friend getting a free burger, or entering to win an Xbox, you’re quite likely to check out how you can get the same thing. But promotions are legally regulated through the United States and the rest of the world, prompted by countless fake giveaways, confusing prize terms, etc.

Analyzing interactions in Twitter. The case of an exploratory seminar In this post I’ll explore the social interactions in Twitter that were made by participants and supervisors of an exploratory seminar as well as the external experts that joined the discussion. The seminar was designed to let students explore the power of Social Media in a real world scenario with the goal to enable participants to value the strengths and weaknesses of such tools in a co-operative working context. Therefore, one key requirement in the learning design was for students to communicate and collaborate with nothing else than Social Media tools. In accordance to the rationales of constructivist learning theory (Jonassen, 1999), students should actively create their own knowledge about the practical use of Social Media tools in realistic scenarios.

Screensaver - visualizing the global blogosphere Twingly Screensaver Beta Twingly screensaver is visualizing the global blog activity in real time. Forget RSS readers where you see only what you're interested in. The Pros and Cons to Direct Messaging Private messaging through social media is nothing new – most social sites have had some sort of messaging system in place since their inception. But, to combat spambots and online lurkers, users were normally restricted to only sending messages to their friends or the people that they followed who followed them back. If you weren't connected with somebody, you couldn't message them. That, however, has changed thanks to the need to monetize social sites, and Facebook and LinkedIn both offer users the option to pay their way into an inbox. Twitter, however, remains steadfast in the older 'followers-only' model.

Tiny Circleslider: A lightweight circular carousel for jQuery What is it? Tinycircleslider is a circular slider / carousel. That was built to provide webdevelopers with a cool but subtle alternative to all those standard carousels. Tiny Circleslider can blend in on any wepage. 10 Tips for Posting on Your Brand's Facebook Page Ekaterina Walter is a social media strategist at Intel. She is a part of Intel’s Social Media Center of Excellence and is responsible for company-wide social media enablement and corporate social networking strategy. Once your brand is on Facebook, the question becomes: How you engage those fans and sustain a meaningful online dialogue with your customers.

businessinsider.com EngagementNew / ReturningTraffic Sources Concurrent Visits Number of people on your entire site right now. You'll see this updating constantly as your visitors come and go. Web Trend Map 4 by Oliver Reichenstein The has been featured all across the web from TechCrunch to BoingBoing, and Gawker. Now the latest version of our popular Web Trend Map is up for grabs.—The Web Trend Map plots the Internet’s leading names and domains onto the Tokyo Metro map. LinkedIn Marketing Best Practices LinkedIn is the largest and most influential professional network in the world with approximately 225 million users. The social network is great for making new connections, staying in the know about industry news and trends, sharing content, building and maintaining a following, and amplifying brand reach and visibility.

25 Amazing Responsive jQuery Slider Plugins With almost every aspect of the internet going mobile, more and more web developers than ever before are being hired primarily to ensure that websites acquire responsive capabilities. Indeed, as the mobile computing continues to heat up, the demand for responsive WordPress templates, HTML themes, and plugins is likewise on the rise. Among the web elements that need to go responsive to keep up with the times, are the image showcase mechanisms of websites. We are referring here of sliders, carousels, galleries, accordions and others which are common features of websites and looks great on most sites using a to show off key content and images. These things need to go responsive as well to accomplish 100% responsiveness of any given site. Sliders with a responsive layout scale the images and the typography to fit the screen size.

How To Build A Facebook Landing Page With iFrames I know it has been on your mind lately: How do I build a landing tab on Facebook now that FBML is gone? What are iFrames anyways? Is this now in the hands of super-geek programmers only?