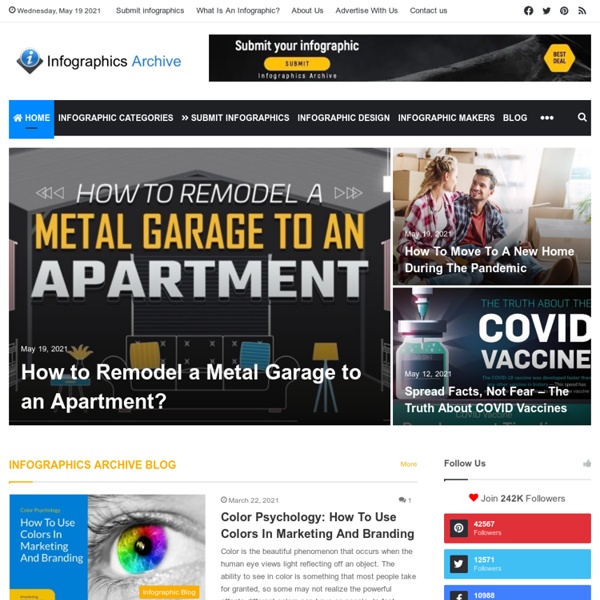 The cost of being Batman - Infographic by MoneySupermarket We've all wanted to be Batman at one time or another, but how much would it cost to actually become Batman? Of all the superheroes, Batman's wealth is significantly larger than most - with the possible exception of Tony Stark aka Iron Man. Wayne Manor costs $600,000,000 alone with an annual running cost of $37,000.

Disinformation Visualization: How to lie with datavis By Mushon Zer-Aviv, January 31, 2014 Seeing is believing. When working with raw data we’re often encouraged to present it differently, to give it a form, to map it or visualize it. But all maps lie. In fact, maps have to lie, otherwise they wouldn't be useful. 3 things the Joker has taught me about content marketing - NewsReach As an avid Batman fan, I thought Heath Ledger’s portrayal of the Joker in the Dark Knight was one of the most terrifying and brilliant examples of acting in modern cinema. He was also brutally honest in the movie and because of this I’d like to take some of his more famous lines from the movie and apply them to what content marketers have had to come to grips with recently. 1. “You wanna know how I got these scars…?” Every business has a past and at some point during that past it has had to struggle to survive.

Maps Mania: How to Create Hexagon Grid Maps In How to Create Grid Maps I gave an example of a square grid map created using the Leaflet.js mapping library. I really wanted to add an example of a hexagon grid map to that post but I didn't have the time to create the hexagon shapes. CartoDB however has come to the rescue with this nice hexagon grid map of Bee Loss in the USA. 5 Tools For Creating Your Own Infographics Five years ago, almost nobody knew what the heck an infographic was. (I sure didn’t, and I was a graphic design major in college at the time.) Now that the infographic craze has saturated us with new visual knowledge (and marketing gimmicks), something interesting has happened: The creation of infographics has become democratized. No longer is the act of creating a visual data story confined to professional designers using professional tools like Adobe Illustrator or Photoshop. Now anyone with a data set can build an infographic.

Maps Mania: How to Create Grid Maps Most of the successful UK election maps over the last week have used hexagon grid maps or plain square grid maps. The npr Visuals Team has published an interesting article exploring the design choices that they made for using hexagon grid maps in some of their recent data visualizations. Let’s Tesselate: Hexagons For Tile Grid Maps explains why and how the Visuals Team have been creating hexagon grid maps for a number of mapped visualizations on NPR. If you want to create your own USA state grid maps you can follow Kyle Walkers tutorial on how he created a grid map to show obesity by state in the USA. Obesity by state, 2013: a CartoDB state squares experiment uses a state squares GeoJSON file shared by Bill Dollins on his GitHub repository.

Infographics: How to Strike the Elusive Balance between Data and Visualization They started out as a social media experiment and then suddenly everyone wanted a piece. A couple years back, if you dropped the word ‘Infographic’ or ‘Dataviz’ in a conversation, you would have been greeted by a good number of confused looks even if you were among other web designers. Today, so many infographics have gone viral that it’s practically impossible to ignore them. McClatchy-Tribune Related media: Text | Visuals Graphic shows what happens during a lunar eclipse and explains the differences between a lunar and solar eclipse; North America has two opportunities to view a total eclipse of the moon this year, the first in the early hours of April 15 and the second on Oct. 8. MCT 2014

Content Marketing Framework: Plan Plan the work. Work the plan. Planning can take a number of forms, depending on where you lie in your content marketing journey. If you are just beginning to build your program, planning might take the form of a business case or even a simple mission statement. For other organizations that have been building a content marketing program for some time, it may exist as a regular checkpoint to ensure that your programs continue to meet broader (and sometimes changing) business goals. Regardless, the “planning” element of your program should be the first — and strongest — thread throughout your content marketing framework. Huge Infographics Design Resources: Overview, Principles, Tips and Examples Design Imagine what would happen if you were speeding on a highway, and trying to read a traffic sign that contains too much information, would you be able to read the information exactly? Compare if you were just seeing a place name, a mileage, or an arrow-sign, which one would be more effective for you? Well, that’s just a simple instance. Simply due to the unclear information given, anyone who sees and reads it could miss the important message on it. Data visualization to overcome this has been used worldwide for many years, where a complex piece of information needs to be delivered fast and clear.

Social media image dimensions 2014: the complete guide for Facebook, Twitter and Google +   (UPDATED! April 2014) As always, I’m going to be completely honest: all the information on sizes and dimensions of cover photos for social networks, including backgrounds, profile pictures, etc. have changed several times. Success Strategy: Explain your design work “How to present a new idea is, perhaps, one of the designer’s most difficult tasks.” This is from graphic design luminary Paul Rand, who knew that, although never easy, explaining your work to a client is an absolutely key part of the design process. Skip it, and you’ll likely be out of step with the client from the get-go. We see a lot of designers enjoying abundant success on 99designs and, sure enough, the best of them have all internalized this basic trick: present your work with at least a brief explanation of your decisions and intentions, and the client is infinitely more likely to appreciate what you have done. Indeed, in this visually hectic world sometimes we don’t even see things until they are pointed out to us. Do you remember the first time someone revealed that sneaky arrow in the negative space of the FedEx logo?