How Recruiters Use Social Networks to Screen Candidates 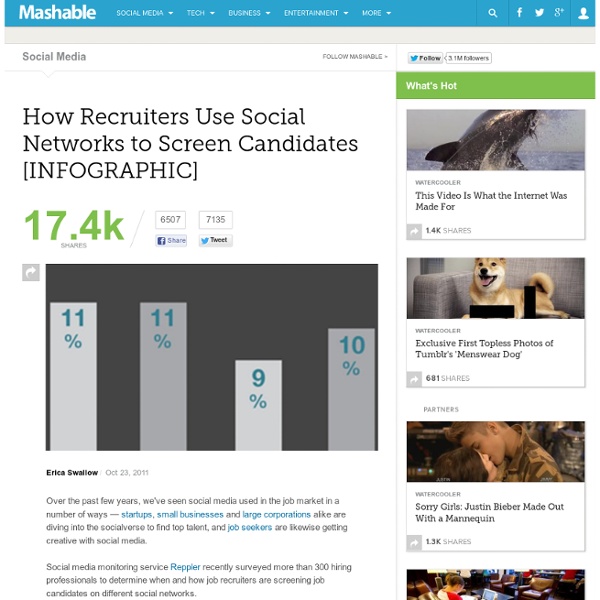 Over the past few years, we've seen social media used in the job market in a number of ways — startups, small businesses and large corporations alike are diving into the socialverse to find top talent, and job seekers are likewise getting creative with social media. Social media monitoring service Reppler recently surveyed more than 300 hiring professionals to determine when and how job recruiters are screening job candidates on different social networks. The study found that more than 90% of recruiters and hiring managers have visited a potential candidate's profile on a social network as part of the screening process. And a whopping 69% of recruiters have rejected a candidate based on content found on his or her social networking profiles — an almost equal proportion of recruiters (68%), though, have hired a candidate based on his or her presence on those networks. Every week we post a list of social media and web job opportunities. Infographic courtesy of Reppler

Social media attracts London's job seekers | Features Forty three per cent of Londoners use social media to look for jobs, new research from LondonlovesJobs.com has found. The survey also found that 30 per cent of business leaders are especially likely to use LinkedIn when hunting for a new position. The technological evolution of the internet has altered how we behave in many ways and it looks like job seeking is no different. To find out more about Londoners’ job seeking habits why not check out LondonlovesJobs.com’s nifty infographic. It appears that men are far more likely to use LinkedIn than their female peers with 30 per cent of males citing the social media as a viable job hunting option versus only 18 per cent of females. The survey carried out by the new jobs board showed that while the way in which people search for roles is changing dramatically, employers have been slow to adopt these new modes. “The shift from print to online was nothing compared to the use of social media which now dominates the recruitment space.

CNN.com International - Breaking, World, Business, Sports, Entertainment and Video News No More Résumés, Say Some Firms How Companies Use Facebook To Hire And Fire Employees (INFOGRAPHIC) In an increasingly digitized world, roughly 45 percent of employers now reportedly use social media sites like Facebook, LinkedIn, and Twitter to screen potential employees, according to Mindflash.com. Not all Facebook-related employment decisions are necessarily negative, as Mindflash.com depicts in the below infographic. Indeed, 18 percent of employers have found information that has actually facilitated their decision to hire a job applicant. Still, finding something unsettling is more common, as more employers used what they found on social networking sites to bar applicants from employment. More than ever, already-hired employees are paying careful attention to what is on their Facebook. Beyond the more obvious red flags of inappropriate photographs and comments, Mindflash also says a prime reason for potential employees being denied a job is their digitally badmouthing of ex-employers and patrons. View mindflash.com infographic here:

12 Awesome LinkedIn Infographics in 2011 5 Ways Social Media Is Revolutionizing Talent Acquisition Sajjad Masud is co-founder & CEO of Simplicant, a cloud-based social recruiting platform transforming talent acquisition and making enterprise-level recruiting technology accessible to companies of all sizes. Connect with Sajjad and the Simplicant team on Twitter and Facebook. The way we communicate with each other has evolved rapidly over the last decade. Social media has further intensified the departure from traditional communication methods to redefine how people and businesses interact with each other. In fact, more than half of companies on social media fail to have a social media strategy and in doing so, risk ignoring an increasingly dynamic and expanding audience. Recent social media stats show that more than 60% of adults are connected to one or more social networks, while 23% of online time is spent entirely on social networking activities. While social media has seen rapid growth at the consumer level, the gap between consumer and corporate adoption is widening. 1. 2. 3. 4.

How your Facebook status could put you out of work | Money Employers often have a social media policy in your contract, strengthening their position in a tribunal. Photograph: Joerg Koch/AP Thinking of badmouthing your employer or work colleagues on a social networking site? On the face of it, social networking outlets such as Facebook and Twitter might appear to offer people an arena for venting their spleen on any issues, including gripes and grievances about work. But although they may well be your own private views, such forums are often viewable by anyone, and you may face repercussions from your employer if you choose to write about work issues, regardless of whether it's from your desk, home or mobile phone. Many companies now have a social media/blogging policy as part of their contractual terms with employees, providing clear limitations about the permissible contents of a blog. Such policies put employers in a much stronger position when they want to take action against employees writing things they don't approve of.

Social Recruiting On The Rise In 2011 | Unbridled Talent Results from the 2011 Social Recruiting Survey conducted by Jobvite indicate that the use of social media and social networks for recruiting continues to increase among employers and their efforts are paying off! Almost 2/3 of respondents indicated that they have successfully hired a candidate via their social recruiting efforts within the last year. The Jobvite survey includes responses from over 800 employers in the US, and now in it’s 3rd year, provides a good benchmark for social recruiting growth. The survey also indicates that many employers are expanding their use of social networks for recruiting beyond LinkedIn, with 64% of employers indicating that they use two or more social networks for recruiting in 2011. The survey results reveal that a majority of employers expect to increase hiring over the next 12 months and 77% expect increased competition for talent as the economy heats up.

UK tribunal upholds Apple's firing of retail employee for critical Facebook post By Josh Ong A British Employment Tribunal has upheld Apple's decision to dismiss a retail store employee who violated company policy by posting derogatory comments about his employer on the Facebook social networking site. The employee, named Crisp, lodged a complaint with the tribunal after he was fired for gross misconduct when negative posts to a private Facebook page were passed along to the Apple Store manager by a coworker. Though Crisp had argued that the dismissal was unfair because the messages were private, the tribunal decided that the communication was not protected because friends could have easily copied and shared it. Also at issue was whether Apple's social media policy prohibiting "commentary on Apple products, or critical remarks about the brand," was valid, as noted by People Management. ifoAppleStore noted that Apple does allow employees to post on the Internet, but forbids employees from mentioning the company's name or their employment at Apple.

Use Facebook for Recruiting Safe social networking | Stay Smart Online While most people who use social networking sites are well intentioned, you need to be careful about the information that you share and how you protect it. People can inadvertently or intentionally use your information to embarrass you or damage your reputation, or to even steal your identity. Social networking sites such as MySpace, Facebook, Twitter and Linkedin are used to stay in touch with friends, make new friends or business connections and to share information and opinions about topics we're interested in. You need to think about how much information you provide and to whom. Top tips Always type your social networking website address into your browser.Never use the same password that you use for your bank or email accounts. Read the website Privacy policy before you sign up. Some sites may share information such as email addresses or user preferences with businesses, which could send you spam. Once information is online, it is not easy to remove it completely.

Employers, Get Outta My Facebook Pro: Web Profiles Aren’t Résumés by Greg Fish Imagine posting a picture of yourself in a Halloween costume on your MySpace (NWS) or Facebook profile at the risk of killing your career. Or having your employment hinge on whether a hiring manager likes your views on abstinence-only sex education. One could argue that if you choose to make your profile public, everything you post is fair game. What happens if an applicant charges she was rejected because a hiring manager didn’t like that her profile identified her as a vegan Democratic atheist who enjoys basket weaving? Even worse, an employer could unearth inaccurate information. Also, let’s remember that people use the anonymity of the Internet to portray themselves as they want to be seen rather than as they really are. Job seekers already have to contend with background screens, drug tests, credit checks, and verification of employment history, education, and income. Con: It’s All Part of the Package by Timothy B.