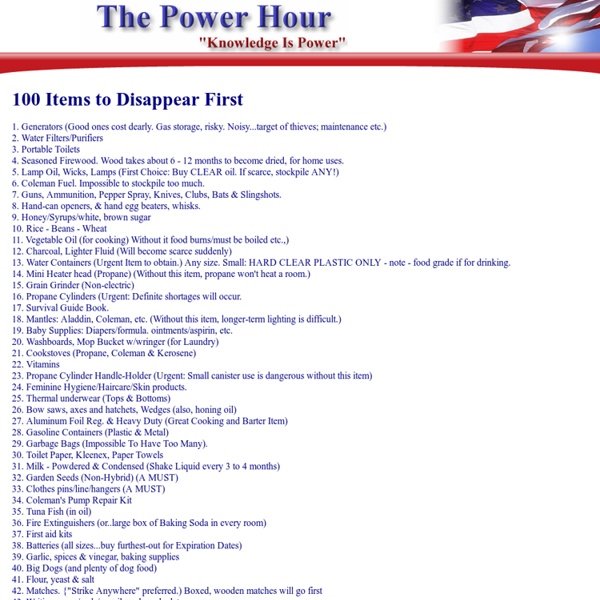 Vanishing Point: How to disappear in America without a trace Where there's water, life is possible. True, it may be very difficult and very hard to live, depending, but anyone who's driven, hiked, or camped in the American South West will have noticed that cities and ranches crop up where there's surface water or where there's been a well dug. Within the state of California, Nevada, Arizona, Utah, New Mexico, and Colorado, there are deserts, mesas, mountains, and forests where normally people never or rarely visit; not-so-secret places where there's water, access to a road within a day's hike, and where a fairly rugged individual may hide while remaining basically healthy, marginally well fed, and reasonably sane. In this section I'll look at two such environments, neither of which I would recommend, but one of which I'd suggest is a reasonable way to live in basic health while either on the run, hiding out from the law, old girl friends, the draft for an illegal war, putative wives and such. Where exactly?

The Survival Spot Blog Throughout history honey has been considered a food with unparalleled nutritional and physical benefits. For over 10,000 years (and maybe more) honey has been used as a staple food and as a medicine. This deliciously sweet substance is one of the few foods that can actually sustain human life all by itself. If you’re not already storing honey as part of your survival strategy, learning about all the surprising benefits of honey ought to convince you to start. Back to Basics, DIY Soda Can Stove A small portable way to cook your meals while you are out backpacking and do not want to carry something heavy, using a soda can stove will allow you to boil water, cook your meal, or rehydrate your meal while on the go or in an emergency situation. There are many different types of can stoves out there, here is one version. For this version the directions were taken fromthesodacanstove.com.

Get Prepared: 122 Of The Best Prepper Websites On The Internet By Michael Snyder, on December 18th, 2014 Getting prepared for the chaos that is coming to America in the years ahead is not that complicated. Help is out there – if you know where to look. 12 survival schools that could save your life 1 of 12 Autoplay Show Thumbnails Show Captions Would you know what to do if you were dropped in the middle of the woods (or desert, or mountains) with only the clothes on your back and -- maybe -- a knife?

How to start your life over from scratch? If you had to walk away from your life in a split second, how would you start over? Writing a short story about a character who has to leave everything behind in his life with no prior warning. Literally set up as walking down a street and sees "x event" (something from his past) and realizes that everything associated with his current identity is compromised.

12 Gadgets to Survive the Apocalypse Now is a good time to ponder the apocalypse. Iran and North Korea are going nuclear, the wonky weather is a harbinger of catastrophic climate change, and end-of-the-world blockbusters abound. (Tim Burton's '9' came out last week and '2012,' 'The Road,' and 'Zombieland' are all coming up later this fall.) In that dismal spirit, the Switched team has gathered its first choices for last-chance gadgetry -- a collection of 12 must-haves if society is in peril, whether it be by fire or ice, zombies or aliens. Using our handy "What Type of Apocalypse Will It Be?"

Bug Out Bag – The 7 Types of Gear You Must Have to Survive Bug Out Bag For someone new to being a Survivalist building your first Bug Out Bag can seem like a big task. Everybody you read about has been tweaking theirs for months or even years and has a pile of gear built up. It’s hard to know where to start, but if you cover all of the basics in a survival situation you will still be much better off that 99% of the people. A Bug Out Bag, also called a BOB, I.N.C.H Bag (I’m Never Coming Home Bag),Get Out of Dodge Bag (GOOD Bag), or 72 Hour Bag is usually designed to get you out of an emergency situation and allow you to survive self-contained for up to 3 days.

Homemade Firewood: How to Make Logs from Newspaper I’m always looking for new ways of of using common household materials in a survival situation. The other day I came across how you can take old newspapers and turn them into logs that can be used for fuel similar to any other log. How to Make Logs from Newspaper Step 1: Soak the Newspaper 10 day survival pack for your vehicle for just $25 by Jeffrey Yago, P.E., CEM It seems like every winter there are news stories of people getting stranded for weeks in bad weather while driving through the many remote areas of our country. In fact, this past winter, our nation held its breath waiting for news of James Kim and his family who got lost traveling the snowy roads of Josephine County in Oregon, not far from where this magazine is published. While his wife and daughters, who stayed with their vehicle, were eventually found alive, he succumbed to the cold as he hiked through snow looking for help for his family. And there are also many cases of people trapped for days in their vehicles after skidding over a bridge embankment, even though they were only a few hundred feet from a busy highway. I have written many articles about how to prepare your home for a power outage or national emergency, but today I want to address how to be prepared for an emergency when traveling in your car or truck. Keeping warm and safe

Blog ? The Top 10 Plants for Removing Indoor Toxins Common indoor plants may provide a valuable weapon in the fight against rising levels of indoor air pollution. NASA scientists are finding them to be surprisingly useful in absorbing potentially harmful gases and cleaning the air inside homes, indoor public spaces and office buildings. The indoor pollutants that affect health are formaldehyde, Volatile Organic Compounds (benzene and trichloroethylene or TCE), airborne biological pollutants, carbon monoxide and nitrogen oxides, pesticides and disinfectants (phenols), and radon.

Survival Gear & Bug Out Bags A Bug out bag is basically a large survival kit that’s filled with everything you need to survive after a disaster. A Bug Out Bag allows you quickly grab what you need should you be forced to evacuate during a disaster. Most experts suggest that your BOB should contain enough supplies to last for at least seventy-two hours. Since most major disasters often disrupt services and normal life for longer than 72 hours, we think it is a good idea to have a Bag that will allow you survive for an indefinite period of time. Make sure your Bag is built to fit your needs; some people may need items that are not listed on this list. Remember that these are just some general guidelines meant to help you get your bag together.

How to Put Together the Ultimate Survival Kit Would you be willing to stake your life on your survival kit? I would. There are so many debates when it comes to the perfect survival kit. In my opinion, the items you choose to be in a survival kit can be very different based on the situation you see yourself in (maritime vs. desert survival) as well as your level of skill. For that reason there are a number of factors that determine what items you ultimately put in it.