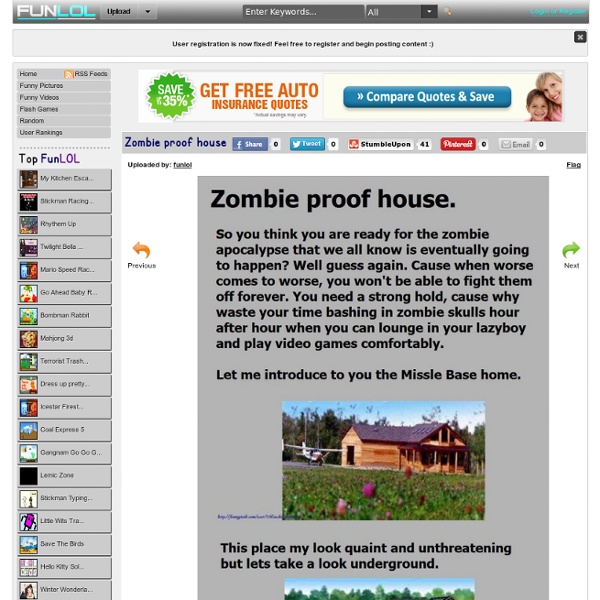 Laser Crosswalk Saves Pedestrians From a Painful Death When the light turns red, a huge laser wall projecting apparitions of crossing pedestrians spans across the crosswalk. The concept is designed to keep crossing pedestrians safe from any overzealous drivers who otherwise might have ran the red light. Link [via] Zombie wiki Zombies are fictional undead creatures regularly encountered in horror and fantasy themed works. They are typically depicted as mindless, reanimated corpses with a hunger for human flesh, and particularly for human brains in some depictions. Some zombies are inspired from Haitian Vodun; while others, like the ones in George A. Romero's film Night of the Living Dead, do not have that same direct connection.[1][2] Zombies have a complex literary heritage, with antecedents ranging from Richard Matheson and H. P. The flesh-hungry undead have been a fixture of world mythology dating at least since The Epic of Gilgamesh,[3] in which the goddess Ishtar promises: I will knock down the Gates of the Netherworld, I will smash the door posts, and leave the doors flat down, and will let the dead go up to eat the living! And the dead will outnumber the living! The actor T. A young zombie (Kyra Schon) feeding on human flesh, from Night of the Living Dead (1968) "The kids in the audience were stunned.

Survive The Zombie Apocalypse Well here we are—2012. End of the world time. Sucks, doesn’t it? We’re not sure how we’re going out, but we’re putting our money on zombies. Yup, zombies. (It’s an outside bet.) 1. 2. 3. 5. 6. 7. 8. 9. Decked Out: Zombie Apocalypse Unless you’ve been hibernating in your underground bunker for the last few weeks, you’re well aware that the zombie apocalypse is upon us (just like the Mayans predicted). We’re no suckers, we know there are a few steps we’ve got to take before any Walkers coming strolling into our neck of the woods. Besides settling on the ideal blunt object, we’ve got to have our attire in order. 1.

The Walking Dead The series has been well received and has been nominated for many awards, including the Writers Guild of America Award[13] and the Golden Globe Award for Best Television Series – Drama.[14] The series has also attained strong Nielsen ratings, surpassing various records for a cable series, including viewership of 16.1 million for its season four premiere, making it the most-watched drama series telecast in basic cable history.[15] The group is led by Rick Grimes, who was a sheriff's deputy[3] before the zombie outbreak. At every turn they are faced with the horror of the walking zombies, the changing dynamic of their group, and hostility from the scattered remains of a struggling human populace who are focused on their own survival now that society's structures have collapsed. Andrea arranges a meeting between Rick and The Governor, who promises to end all hostilities in exchange for having Michonne handed over to him.

MacGyver, Survivalist, or Stockpiler: The Urban Survival Skills Everyone Should Know It's your word against his.. If he ain't talkin, your word pretty much wins. Also, don't try draggin him back in your house after he's dead.. The cops will be able to tell he was shot inside your house. As soon as you're involved in a shooting like this, call the cops, then a lawyer.. You are so bad ass. Seriously, you're advocating shooting a potential burglar with your "Mossy, Remy or Mr. We're not all in middle school, you know, and life is not like a Die Hard movie. I don't want to kill anyone. I am not running from my house. You can be a moral coward and subject yourself to the will of a criminal, however I will suffer no such victimization. @jodark It's not cowardly to leave and certainly not morally cowardly to leave if there is an intruder in your house. Unless you were a soldier or a police officer, you have probably not faced a life or death situation, and frankly, you are likely not equipped to fight back adequately.

Andrea & governor The First Zombie-Proof House Somehow, ritual drunk-conversation concerning team captains for the apocalypse has become a major part of the lives of 20-somethings. Having been matured in the Grandaddy-crowned masterpiece film (put “A.M. 180” on and forget that you have a job) 28 Days Later and the best-selling Zombie Survival Guide, we’re all a little too ready to deal with the 2012 zombie apocalypse of our dreams. “The Safe House,” designed by KWK Promes, starts to get eerily close to something I could work with, if say 200 bludgeoned members of the undead army came over to eat their way into borrowing some sugar. “The most essential item for our clients was acquiring the feeling of maximum security,” begins the designers’ website in the summary of the structure. The house, with its movable walls, has only one entrance, which is located on the second floor after crossing a drawbridge.

Rick Grimes Rick Grimes has been described as an everyman character who emphasizes moral codes and values.[2][3][4] Lincoln obtained the role in April 2010; Kirkman felt he was an "amazing find". In preparation for the role, Lincoln sought inspiration from Gary Cooper in his work in the American western film High Noon (1952) as well as the television drama series Breaking Bad. Lincoln has been well received for his portrayal of the character and has been nominated for a Saturn Award for best actor on television. Appearances[edit] Comic book series[edit] Some time later however, the Governor is revealed to be alive despite being horribly disfigured, and attacks the prison by manipulating his followers into believing Rick's group are marauders. After the prison is made insecure by the attack, Rick and the remaining survivors meet back up at Hershel's farm, where they come upon a new survivors who are on a mission to Washington, D.C., lead by Abraham Ford. Carl survives, initially with minor amnesia.