Newspunch. Arrhenius 1906, final. Arrhenius 1906, final. Most of the Recent Warming Could be Natural - Jennifer Marohasy. AFTER deconstructing 2,000-year old proxy-temperature series back to their most basic components, and then rebuilding them using the latest big data techniques, John Abbot and I show what global temperatures might have done in the absence of an industrial revolution. 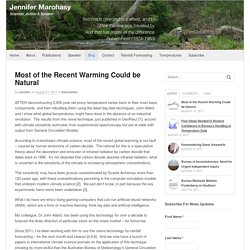 The results from this novel technique, just published in GeoResJ [1], accord with climate sensitivity estimates from experimental spectroscopy but are at odds with output from General Circulation Models. According to mainstream climate science, most of the recent global warming is our fault – caused by human emissions of carbon dioxide. Most of the Recent Warming Could be Natural - Jennifer Marohasy. Australian Research Study Suggests Global Warming Is Almost Completely Natural and CO2 Is Not the Cause. Credit: CC0 Public Domain By Bob Yirka | Phys.org Australian biologist Jennifer Marohasy and computer scientist John Abbot have published a paper in the journal GeoResJ outlining their study of climate change using neural network technology—their results show that the climate changes the world is now experiencing are almost completely natural. 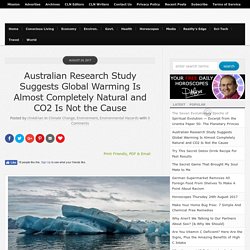 Marohasy offers an additional explanation and outline of their work on her blog. Also, alt-right news site Breitbart offers a take on the work. Most scientists around the world have reached a consensus on global warming—it is happening, and it is happening because humans have ejected so much CO2 into the atmosphere. #climate - Why is a further increase of 1C potentially a tipping point? - Skeptical Science. The BBC has a story about a new paper that highlights a source of carbon that has not been previously considered …. 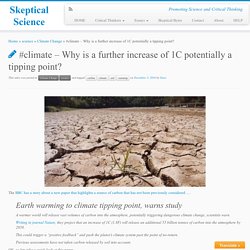 Earth warming to climate tipping point, warns study A warmer world will release vast volumes of carbon into the atmosphere, potentially triggering dangerous climate change, scientists warn. Threat of Sea Level Rise Intensifies as Antarctica's Melting Ice Sheet at 'Point of No Return' British researchers have reinforced recent evidence that melting in the Antarctic caused by the warming of the Southern Ocean could ultimately lead to global sea levels rising by around 3 meters or nearly 10 feet. 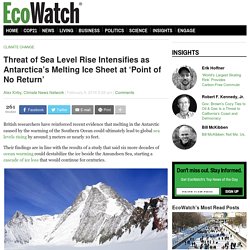 Their findings are in line with the results of a study that said six more decades of ocean warming could destabilize the ice beside the Amundsen Sea, starting a cascade of ice loss that would continue for centuries. That 2015 study, which used computer simulations, was the work of scientists from the Potsdam Institute for Climate Impact Research in Germany. But the UK scientists used a much more direct method of assessing the landscape to establish how the West Antarctic ice sheet might respond to increasing global temperatures. They just examined the mountain tops that stick up above the ice. Levels of Ice But it would not have melted entirely, which they say suggests that ice would have been lost from areas below sea level, but not on upland areas. His fellow leader, Dr.

Project Censored #25: Greenland's Meltwater Contributes to Rising Sea Levels. Editor’s Note: As you may recall, within the last year, I have featured most of Project Censored’s 2013-2014 Top 25 List. 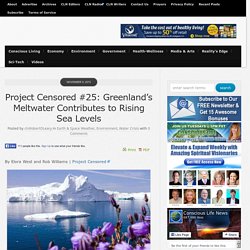 Now the latest list, for 2014-2015, has been released. Here is Project Censored # 25 article and stay tuned for more to come each week In February 2015, Tim Radford reported for the Climate News Network that atmospheric warming is capable of reaching thousands of meters below Greenland’s massive ice sheet, potentially increasing the glaciers’ rate of flow and creating pools of “meltwater” trapped below the ice. Two separate but related studies confirmed that surface melt can drain down to fill concealed lakes under the ice, ultimately contributing to rising sea levels. 'The Day After Tomorrow' Ice Age Scenario Could Be Possible, Researchers Say.

Two separate and very different studies have confirmed a climate paradox—that global warming and a slowdown in the Atlantic Ocean currents could trigger climate change and bring a prolonged chill in Europe. 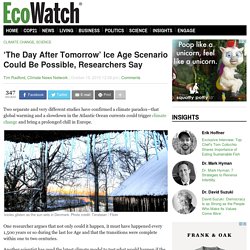 One researcher argues that not only could it happen, it must have happened every 1,500 years or so during the last Ice Age and that the transitions were complete within one to two centuries. Another scientist has used the latest climate model to test what would happen if the Atlantic current slowed or collapsed during a period of global warming.

He found that for 20 years the planet would cool, rather than continue to warm. And then global warming would resume. Climate Machine. El Niño Is Here And That Means Droughts, But They Don’t Work How You Might Think. With an El Niño looming large this summer, it is very likely we will start to hear quite a bit about drought over the coming months. 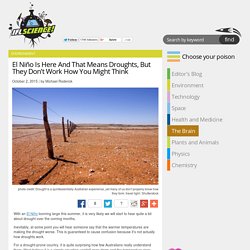 Inevitably, at some point you will hear someone say that the warmer temperatures are making the drought worse. This is guaranteed to cause confusion because it’s not actually how droughts work. For a drought-prone country, it is quite surprising how few Australians really understand them. Most believe it is a simple equation: rainfall goes down and the temperature rises, leading to more evaporation and an increasingly parched landscape. Studies Suggest Sun Triggers Massive Earthquakes. The sun is triggering the deadliest earthquakes on the planet, including the recent M8.3 earthquake in Chile on September 16, 2015 and deadly tsunami that followed, according to two papers to be published October 5th in New Concepts in Global Tectonics. 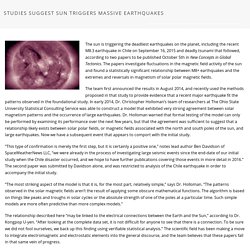 The papers investigate fluctuations in the magnetic field activity of the sun and found a statistically significant relationship between M8+ earthquakes and the extremes and reversals in magnetism of solar polar magnetic fields. The team first announced the results in August 2014, and recently used the methods proposed in that study to provide evidence that a recent major earthquake fit the patterns observed in the foundational study. In early 2014, Dr. Don't blame dairy cows for (greenhouse) gas emissions, new study shows. Forget all the tacky jokes about cow flatulence causing climate change. 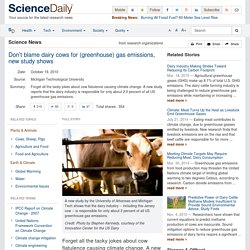 A new study reports that the dairy industry is responsible for only about 2.0 percent of all US greenhouse gas emissions. The study, led by the University of Arkansas in association with Michigan Technological University, measures the carbon footprint of a gallon of fluid milk from farm to table and uses 2007 and 2008 data from more than 500 dairy farms and 50 dairy processors, as well as data from more than 210,000 round trips transporting milk from farm to processing plant. It was commissioned by the Innovation Center for the US Dairy, an industry-wide group. Here’s what happens when you try to replicate climate contrarian papers. Those who reject the 97% expert consensus on human-caused global warming often invoke Galileo as an example of when the scientific minority overturned the majority view. 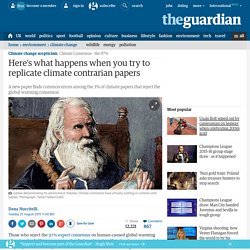 In reality, climate contrarians have almost nothing in common with Galileo, whose conclusions were based on empirical scientific evidence, supported by many scientific contemporaries, and persecuted by the religious-political establishment. Nevertheless, there’s a slim chance that the 2–3% minority is correct and the 97% climate consensus is wrong. To evaluate that possibility, a new paper published in the journal of Theoretical and Applied Climatology examines a selection of contrarian climate science research and attempts to replicate their results.

How Much Of California's Drought Was Caused By Climate Change? Scientists Now Have The Answer. Over the last few years, as California’s historic, four-year drought has intensified, scientists have found clues linking the extreme weather event to human-caused climate change. Now, a new study is the first to estimate just how much climate change contributed to the drought.

The study, published Thursday in Geophysical Research Letters, found that climate change can be blamed for between 8 to 27 percent of the drought conditions between 2012 and 2014 and between 5 to 18 percent in 2014. Though these relative contributions of climate change differ between the two periods of time, due to differences in severity of the drought from year to year, the study said climate change’s absolute contribution was “virtually identical” between the two periods — meaning climate change has contributed a fairly steady amount to California’s drought over the last three years. The researchers used that data to calculate how much water evaporated from the soil each month. California Drought: A Surprising Cause? Sayer Ji & Keith Bell, Green Med InfoWaking Times It’s time to consider the possibility that industrial farming with its focus on chemicals such as glyphosate and glufosinate have played an important role in creating drought and other severe weather patterns.

The term microbiome can be misleading because it conjures images of things so small and insignificant that, in relation to macroscopic phenomena, they are literally invisible. These ubiquitously distributed bacteria collectively constitute together something of a globe-spanning organism, and their collective power to affect changes in the planet’s climate may be far more profound than any of us imagined. For instance, it is now known that the atmospheric microbiome actually regulates rain and snow formation and precipitation. In fact, Earth is surrounded by microbes and the products of microbes flying from land to sky and back to land. Glyphosate is persistent in the environment, commonly found in air, rain, groundwater and rivers. Shell accused of strategy risking catastrophic climate change. Royal Dutch Shell has been accused of pursuing a strategy that would lead to potentially catastrophic climate change after an internal document acknowledged a global temperature rise of 4C, twice the level considered safe for the planet.

A paper used for guiding future business planning at the Anglo-Dutch multinational assumes that carbon dioxide emissions will fail to limit temperature increases to 2C, the internationally agreed threshold to prevent widespread flooding, famine and desertification. Finally! Some climate crisis honesty: Forget About a 2C Future; It Will be 4-6 Degrees Centigrade, and Soon. Carbon Dioxide Triggered Ancient Mass Die-Off. The Permian Extinction saw the end of many species, including the trilobites. (UCL Geology Collections via Wikimedia Commons) This Creative Commons-licensed piece first appeared at Climate News Network.

A Major Surge in Atmospheric Warming Is Probably Coming in the Next Five Years. While the rate of atmospheric warming in recent years has, indeed, slowed due to various natural weather cycles—hence the skeptics’ droning on about “pauses”—global warming, as a whole, has not stopped. Far from it. It’s actually sped up, dramatically, as excess heat has absorbed into the oceans. No, Climate Change Is Not Experiencing a Hiatus. New blockbuster paper finds man-made CO2 is not the driver of global warming. Greenland Ice Melt Underestimated Study Says. Global Warming is increasing moisture in Earth's atmosphere driving Mother of all Feedback Loops. Is it time we start saying the E word? Extinction is a dire word for an extreme event. There has been five mass extinctions in our planets history due to either asteroid impacts, climate change caused by volcanism and the shifting of tectonic plates.