On the theoretical failures of neoclassical economics. The New Priesthood: An Interview with Yanis Varoufakis Part I. Yanis Varoufakis is a Greek economist who currently heads the Department of Economic Policy at the University of Athens. 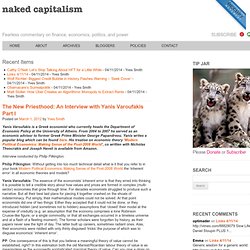 From 2004 to 2007 he served as an economic advisor to former Greek Prime Minister George Papandreou. Yanis writes a popular blog which can be found here. His treatise on economic theory ‘Modern Political Economics: Making Sense of the Post-2008 World’, co written with Nicholas Theocrakis and Joseph Haveli is available from Amazon. There Is No Invisible Hand - Jonathan Schlefer.

By Jonathan Schlefer | 10:06 AM April 10, 2012 One of the best-kept secrets in economics is that there is no case for the invisible hand. 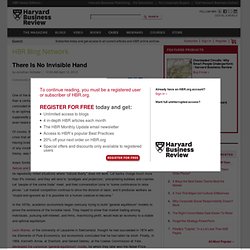 After more than a century trying to prove the opposite, economic theorists investigating the matter finally concluded in the 1970s that there is no reason to believe markets are led, as if by an invisible hand, to an optimal equilibrium — or any equilibrium at all. But the message never got through to their supposedly practical colleagues who so eagerly push advice about almost anything. The Economics Anti-Textbook. Rod Hill and Tony Myatt Mainstream textbooks present economics as an objective science free from value judgements; that settles disputes by testing hypotheses; that applies a pre-determined body of principles; and contains policy prescriptions supported by a consensus of professional opinion. 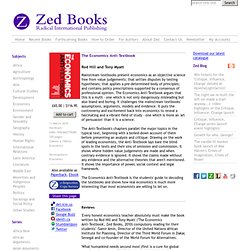 How Fractals Can Explain What's Wrong with Wall Street. Editor's Note: This story was originally published in the February 1999 edition of Scientific American. 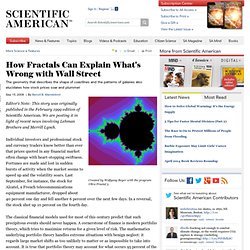 We are posting it in light of recent news involving Lehman Brothers and Merrill Lynch. Individual investors and professional stock and currency traders know better than ever that prices quoted in any financial market often change with heart-stopping swiftness. Fortunes are made and lost in sudden bursts of activity when the market seems to speed up and the volatility soars. Last September, for instance, the stock for Alcatel, a French telecommunications equipment manufacturer, dropped about 40 percent one day and fell another 6 percent over the next few days. Why Supply Side Economics Won’t Solve the Current Economic Malaise.

Prior to law school, Hale Stewart was a bond broker with Vining Sparks, where his clients were comprised of mutual funds, insurance companies and money managers. 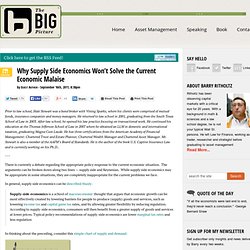 Mr. There is currently a debate regarding the appropriate policy response to the current economic situation. In general, supply side economics can be described thusly: In thinking about the preceding, consider this simple chart of supply and demand: Let’s consider some of the general policies advocated. Above is a chart from the St. Scott Sumner Puts Foot in Mouth and Chews. Reader Valissa has taken to providing economist jokes in comments, but the members of the discipline so often seem eager to make themselves the object of ridicule that efforts like hers sometimes seem redundant. 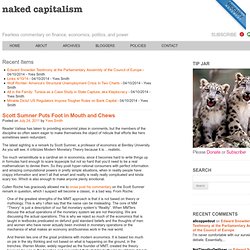 Philip Pilkington: Neoclassical Dogma – : How Economists Rationalise Their Hatred of Free Choice. By Philip Pilkington, a journalist and writer living in Dublin, Ireland What if all the world’s inside of your head Just creations of your own? 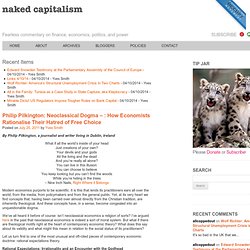 Your devils and your gods All the living and the dead And you’re really all alone? You can live in this illusion You can choose to believe You keep looking but you can’t find the woods While you’re hiding in the trees – Nine Inch Nails, Right Where it Belongs Modern economics purports to be scientific. The Unselfish Gene. The Idea in Brief Executives, like most other people, have long believed that human beings are interested only in advancing their material interests. However, recent research in evolutionary biology, psychology, sociology, political science, and experimental economics suggests that people behave far less selfishly than most assume. Evolutionary biologists and psychologists have even found neural and, possibly, genetic evidence of a human predisposition to cooperate. These findings suggest that instead of using controls or carrots and sticks to motivate people, companies should use systems that rely on engagement and a sense of common purpose.

Several levers can help executives build cooperative systems: encouraging communication, ensuring authentic framing, fostering empathy and solidarity, guaranteeing fairness and morality, using rewards and punishments that appeal to intrinsic motivations, relying on reputation and reciprocity, and ensuring flexibility. Why performance-related pay should get the sack. As the bonus culture in the financial sector once again comes under attack, this column challenges the typical defence that banks need to pay top dollar to attract the best talent. 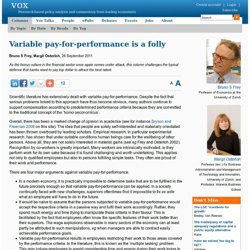 Scientific literature has extensively dealt with variable pay-for-performance. Despite the fact that serious problems linked to this approach have thus become obvious, many authors continue to support compensation according to predetermined performance criteria because they are committed to the traditional concept of the ’homo oeconomicus’. Overall, there has been a marked change of opinion in academia (see for instance Bryson and Freeman 2008 on this site).