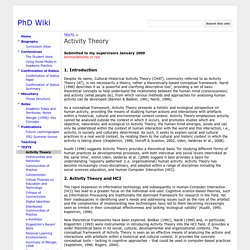 Introduction Despite its name, Cultural-Historical Activity Theory (CHAT), commonly referred to as Activity Theory (AT), is not necessarily a theory, rather a theoretically-based conceptual framework. Nardi (1996) describes it as ‘a powerful and clarifying descriptive tool’, providing a set of basic theoretical concepts to help understand the relationship between the human mind (consciousness) and activity (what people do), from which various methods and approaches for analysing human activity can be developed (Bannon & Bødker, 1991; Nardi, 1996). 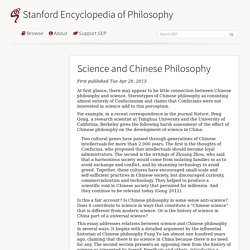 Fung Yu-lan's “Why China Has No Science” In a paper titled “Why China Has No Science,” published in 1922, Fung Yu-lan [Feng Youlan] 馮友蘭 (1895–1990), then a student of John Dewey, argued that: “what keeps China back is that she has no science,” but that: “China has no science, because according to her own standard of value she does not need any.”(1922, 237 and 238). To make this argument, he introduces what he calls two tendencies in Chinese philosophy, which he calls “nature” and “art” or “human,” referring to the products of human artifice. On his account, the Warring States period (475–221 BCE) developed two philosophies, Daoism and Mohism respectively, which followed these two tendencies to extreme, and a third, Confucianism, which he represents as a compromise between them.

On Fung's explanation, the Daoists considered nature perfect while the Mohists sought to improve on it (1922, 238–39). But Neo-Confucian philosophers disagreed about what “things” to investigate. 2. 3. 4. 5. CRADLE - Center for Research on Activity, Development, and Learning - University of Helsinki - Faculty of Behavioural Sciences. Human activity is a complex evolutionary achievement. 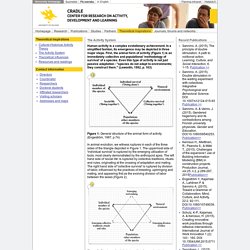 In a simplified fashion, its emergence may be depicted in three major steps. First, the animal form of activity (Figure 1) is an immediately collective and populational 'methodology of survival' of a species. Even this type of activity is not just passive adaptation - "species do not adapt to environments; they construct them. " An Error Occurred Setting Your User Cookie. 14. Art Schneiderheinze's Online Portfolio *** Educator, Instructional Designer, Graphic Designer. Activity Theory (Engestöm, 1987) provides a theoretical framework for analyzing complex human system such as the classroom and examining the impact of an outside tension (e.g., tools such as technology) on the teacher's activity system. 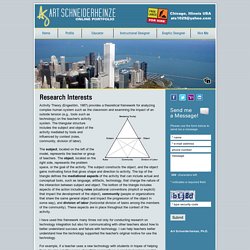 The triangular structure includes the subject and object of the activity mediated by tools and influenced by context (rules, community, division of labor). The subject, located on the left of the model, represents the teacher or group of teachers. The object, located on the right side, represents the problem space, or the goal of the activity. The subject constructs the object, and the object gains motivating force that gives shape and direction to activity. I have used this framework many times not only for conducting research on technology integration but also for communicating with other teachers about how to better understand success and failure with technology. 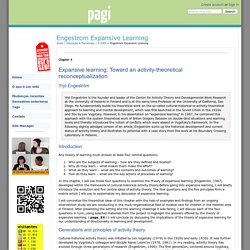 He fundamentally builds his theoretical work on the so-called cultural-historical or activity-theoretical approach to learning and mental development, which was first launched in the Soviet Union in the 1920s and 30s by Lev Vygotsky. However, in his dissertation on “expansive learning” in 1987, he combined this approach with the system theoretical work of Briton Gregory Bateson on double-bind situations and learning levels and thereby introduced the notion of conflicts which were absent in Vygotsky’s framework. Introduction Any theory of learning must answer at least four central questions: Who are the subjects of learning – how are they defined and located? Activity theory as a theoretical framework in the study of information practices in molecular medicine. Introduction It is widely agreed that studies in information science should be situated in a broad or holistic context (see for example Ingwersen and Järvelin 2005). 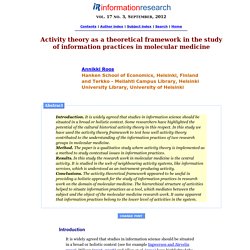 Wilson (2006, 2008) and Allen et al. (2011) have highlighted the potential of the cultural historical activity theory (or simply activity theory) in this respect. According to Wilson (2006), the context of information needs and information uses is understood more deeply using the activity theoretical base. Activity theory enables the discovery of contradictions that affect information practices. Center for Collaborative Action Research. Understanding Action Research Margaret Riel Action research is not a single approach but rather represents a tension between a number of forces that lead to personal, professional and social change. 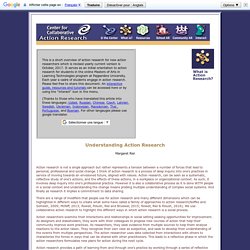 I think of action research is a process of deep inquiry into one's practices in service of moving towards an envisioned future, aligned with values. Action research, can be seen as a systematic, reflective study of one's actions, and the effects of these actions, in a workplace or organizational context. As such, it involves deep inquiry into one's professional practice.