Safety-Training-That-Transfers?email=abednego@outlook. Ellis Ritz is one of the cofounders of Meyvn Global, and is currently acting as the director of learning and development. 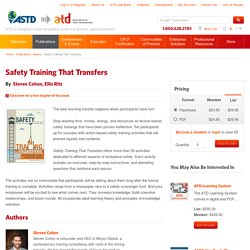 During his nearly 40 years of mining and training experience, Ellis saw a need for training and consulting on a level that others could better identify with. Ellis is always looking for opportunities to get people more involved, and to make training more enjoyable and remembered. He still does classroom training for trainers, frontline leaders, and safety classes working, and is constantly working toward the day when all training gets a “hooray!”

Rather than an “oh no!” The Reflective Teacher: A Taxonomy of Reflection Part 3. Reflective teacher Reflection can be a challenging endeavor. 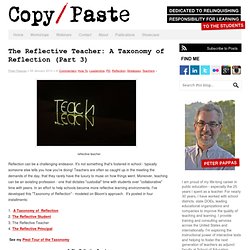 It's not something that's fostered in school - typically someone else tells you how you're doing! Teachers are often so caught up in the meeting the demands of the day, that they rarely have the luxury to muse on how things went. Addressing Maslow’s Hierarchy of Needs with Technology. A major criticism I have of most educational institutions is that their primary focus is on students’ intellectual and cognitive development. 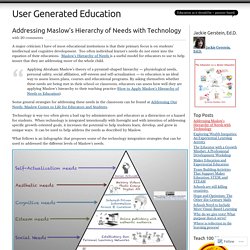 Too often individual learner’s needs do not enter into the equation of their educations. Maslow’s Hierarchy of Needs is a useful model for educators to use to help insure that they are addressing more of the whole child. Applying Abraham Maslow’s theory of a pyramid-shaped hierarchy — physiological needs, personal safety, social affiliation, self-esteem and self-actualization — to education is an ideal way to assess lesson plans, courses and educational programs. By asking themselves whether these needs are being met in their school or classroom, educators can assess how well they are applying Maslow’s hierarchy to their teaching practice (How to Apply Maslow’s Hierarchy of Needs to Education).

Hattie-Studie: »beträchtliche inhaltliche und methodische Schwächen« TeachAde - Free Educational Resources for Educators and Teachers. How to Control a Disruptive Class: The Quick & Easy Method that Saved My Sanity. During my first year teaching middle school students, I found myself in a bit of a dilemma. 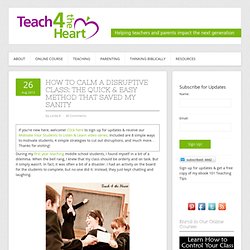 When the bell rang, I knew that my class should be orderly and on task. But it simply wasn’t. In fact, it was often a bit of a disaster. I had an activity on the board for the students to complete, but no one did it. Untitled. Great School Leadership 4: People. Schools are made of people. 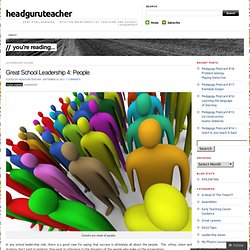 In any school leadership role, there is a good case for saying that success is ultimately all about the people. The ethos, vision and strategy don’t exist in isolation; they exist in reference to the dynamics of the people who make up the organisation. There are lots of dimensions to this all-important people factor: Individual competence and capacity for professional development The dream scenario is to be surrounded by highly competent professionals, who drive themselves to excel in all that they do, make a significant contribution, accept accountability, support the school’s vision and ethos and continually seek to improve their practice.

ERIC - Education Resources Information Center. Heutagogy and lifelong learning: A review of heutagogical practice and self-determined learning. Lisa Marie Blaschke Oldenburg University and University of Maryland University College (UMUC) Abstract Heutagogy, a form of self-determined learning with practices and principles rooted in andragogy, has recently resurfaced as a learning approach after a decade of limited attention. 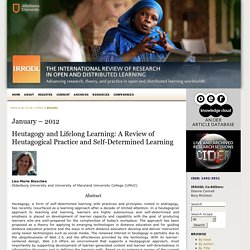 In a heutagogical approach to teaching and learning, learners are highly autonomous and self-determined and emphasis is placed on development of learner capacity and capability with the goal of producing learners who are well-prepared for the complexities of today’s workplace. The approach has been proposed as a theory for applying to emerging technologies in distance education and for guiding distance education practice and the ways in which distance educators develop and deliver instruction using newer technologies such as social media. The renewed interest in heutagogy is partially due to the ubiquitousness of Web 2.0, and the affordances provided by the technology.

The pedagogical foundations of massive open online courses. Teaching guides and strategies. The Best Resources On Differentiating Instruction. My colleague Katie Hull-Sypnieski is leading a February 1st Education Week Webinar on differentiating instruction, and I would strongly encourage people to participate. 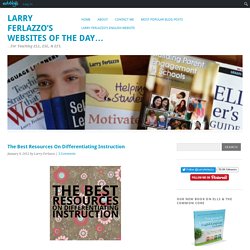 Katie’s the best teacher I’ve ever seen…. In addition, Katie and I have co-authored a piece for Education Week Teacher on the topic that will be appearing there soon (it’s appeared: The Five By Five Approach To Differentiation Success), and an upcoming post in my blog there will be talking about it, too (that two part series has also appeared). I also did a second two-part series in Ed Week on differentiation. Also, check out The Best “Fair Isn’t Equal” Visualizations. Given all that, a “The Best…” post was inevitable, and here it is. Here are my choices for The Best Resources On Differentiating Instruction: The Best Places To Get The “Same” Text Written For Different “Levels”

30 Things You Can Do To Promote Creativity in Your Classroom : InformED. The concept of teaching creativity has been around for quite some time. Academics such as E. Paul Torrance, dedicated an entire lifetime to the advancement of creativity in education. Torrance faced much opposition in his day about the nature of creativity. Creativity was considered to be an immeasurable, natural ability. Torrance called for explicit teaching of creativity. 25 Ways to Institute Passion-Based Learning in the Classroom : InformED. Leading with Intellectual Integrity. This article was written with Jennifer Riel. 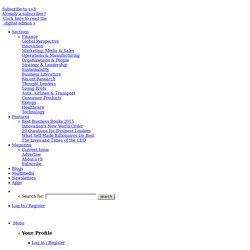 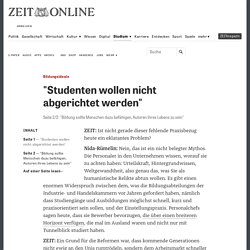 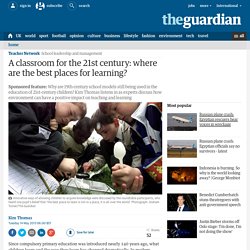 In modern schools, children are encouraged to be independent learners, to share ideas and to work in small groups. Yet the environment in which most children learn remains the same: a building, divided into classrooms and linked by corridors. What's the best way to teach languages? Alex Rawlings was a language teacher's dream. He fell in love with languages when he was eight and learnt Greek, then German, then Dutch. Now, an undergraduate at Oxford, he is the UK's most multi-lingual student, speaking 11 languages. Spotlight on teaching schools - hofmannalbrecht - Gmail. The TES - Education Jobs, Teaching Resources, Magazine & Forums. Internetportal Abiunity: Lernen im Schwarm. John Hattie: Lehrer als Regisseure des Unterrichts.