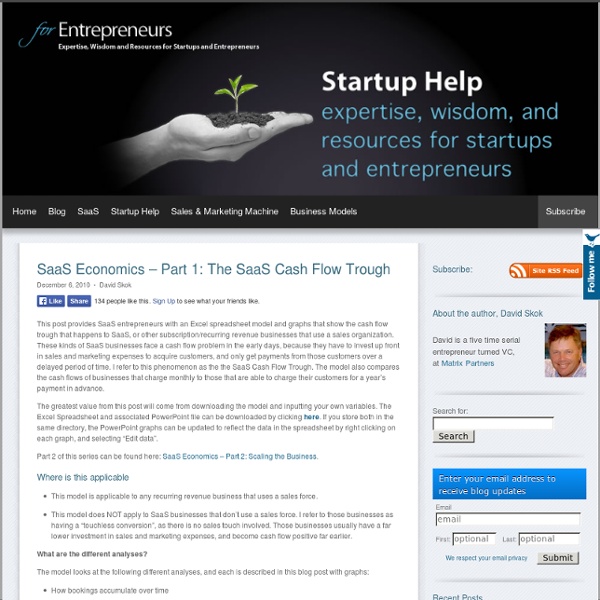 This post provides SaaS entrepreneurs with an Excel spreadsheet model and graphs that show the cash flow trough that happens to SaaS, or other subscription/recurring revenue businesses that use a sales organization. These kinds of SaaS businesses face a cash flow problem in the early days, because they have to invest up front in sales and marketing expenses to acquire customers, and only get payments from those customers over a delayed period of time. I refer to this phenomenon as the the SaaS Cash Flow Trough. The model also compares the cash flows of businesses that charge monthly to those that are able to charge their customers for a year’s payment in advance. The greatest value from this post will come from downloading the model and inputting your own variables. The Excel Spreadsheet and associated PowerPoint file can be downloaded by clicking here. Part 2 of this series can be found here: SaaS Economics – Part 2: Scaling the Business. Where is this applicable The Cash Flow Trough

Founder Control December 2010 Someone we funded is talking to VCs now, and asked me how common it was for a startup's founders to retain control of the board after a series A round. He said VCs told him this almost never happened. Ten years ago that was true. In the past, founders rarely kept control of the board through a series A. But not always. The replies surprised me. I feel like we're at a tipping point here. Founders retaining control after a series A is clearly heard-of. Control of a company is a more complicated matter than simply outvoting other parties in board meetings. So while board control is not total control, it's not imaginary either. The switch to the new norm may be surprisingly fast, because the startups that can retain control tend to be the best ones. A lot of the reason VCs are harsh when negotiating with startups is that they're embarrassed to go back to their partners looking like they got beaten.

Startups and financial models for SAAS companies The other day I met with an entrepreneur I was advising as he prepared to raise his next round of funding. In the meeting, he wanted me to narrow in and focus on his financial model. Financial models for startups are important from a big picture perspective, but I never like to get mired in the full details as things always change in the early stages. Given my experience with SAAS based companies like GoToMyPC (Citrix Online now) and LivePerson (Nasdaq: LPSN), we also spent some time discussing key financial metrics for SAAS businesses that he should pay attention to as he ramped up his business. Pearltrees Dives Into Social Curating With Pearltrees Team Content curation and mapping service Pearltrees has decided to focus on the fact that people want to do things in groups and has as of today upgraded its core product with a groups functionality, called Pearltrees Team. Now accesible just by logging in, Pearltrees Team allows you to hook up with other people in order to create a Pearltree collaboratively in realtime. Ideally this goes down as such: You really care about fashion so you search for fashion in the Pearltrees search box and are confronted with really elaborate visual cluster displays of fashion blogs, each blog its own “pearl.” If the team leader accepts, you then can see all the Pearltree curation happening as it happens as well as as comment on individual Pearltree decisions. In the same space as Storify and Pinterest, Pearltrees currently has 102,000 unique visits, 60,000 active users and 6 million pageviews monthly. Check out more on how to use Pearltrees to organize the web in the video below.

In Local, Google And Groupon Are Now Competing For The Same Dollars Was Groupon crazy to turn down Google’s $6 billion offer, or will it be worth several times that amount a few years from now? Of course, it is impossible to know right now. But if the recent acquisition dance between Google and Groupon tells us anything, it is that local advertising is going to drive a huge amount of growth on the Web—and that it is not going to look like other forms of online advertising. Google wants to buy Groupon not just for its phenomenal growth—Groupon is selling coupons for local merchants at a rate of $2 billion a year now—but also because Groupon follows a pay-for-performance model. Groupon only makes money when somebody buys a coupon, just like Google only makes money when somebody clicks on an ad. You might not think of Groupon as an advertising company, but the way most merchants rationalize offering such deeply discounted deals (typically 30 to 50 percent off) is they treat it as a marketing expense. The question is: How big can it get?

Financial planning for SaaS startups A few people who read my recent post about financial planning asked if I could provide an example for a good financial plan, so I'd like to post one here. The plan is very similar to the one that I created in the very early days at Zendesk and re-used a few times in the meantime, but I had to make a few adjustments to make it more generic. It's a simple plan for an early-stage SaaS startup with a low-touch sales model – a company which markets a SaaS solution via its website, offers a 30 day free trial, gets most of its trial users organically and through online marketing and converts them into paying customer with very little human interaction. Therefore the key drivers of my imaginary startup are organic growth rate, marketing budget and customer acquisition costs, conversion rate, ARPU and churn rate. If you have a SaaS startup with a higher-touch sales model where revenue growth is largely driven by sales headcount, the plan needs to be modified accordingly.

Why is Skype Moving to The Web? Hiring Binge Explained: Tech News « Skype is hiring a whole lot of engineers. Many of them will work on the company’s mobile applications, as we reported earlier this week, and many will work on cloud-based implementations of Skype that would include working with third parties such as LinkedIn. This hiring binge is part of Skype’s big expansion in Silicon Valley, something I wrote about in July 2010. The company has leased 90,000 square feet of office space in the Stanford Research Park at 3210 Porter Drive in Palo Alto, with Jonathan Christensen, Skype’s media platform chief, heading company’s operations in Silicon Valley. A Skype spokeswoman recently told me: We’ve gone from just a few engineers here this time last year to nearly 80 engineers, and they are coming from all over, including from the big name Valley companies too. The hiring binge is mostly because of two distinct reasons: Skype for Business. Skype as a Platform for growth. Graphic by Phil Wolff via Flickr.

Exclusive: DST plans to raise giant venture capital fund - The Term Sheet: Fortune's deals blog There is no bigger name in venture capital right now than Digital Sky Technologies, the Russian Internet conglomerate run by Yuri Milner. It is one of the largest outside shareholders in Facebook, and also holds big pieces of companies like Zynga (both of which it bought at massive, late-stage valuations). There also are reports that it just lost out on a big new round for Twitter. The group so far has been bankrolled by a few global investors – including Goldman Sachs and Tiger Global Management – plus a Russian oligarch. No books are out yet, but multiple sources tell me that a road show is expected to begin within weeks. Attempts to reach Milner and Brown were unsuccessful.

peHUB Wire Editor’s Note: Today’s guest column comes from Jeff Bussgang, a general partner at Flybridge Capital Partners. It is the second installment of a two-part series. IPO Check-up: New York Yesterday, inspired by Bill Gurley’s piece looking at the IPO market in Silicon Valley, I took a closer look at the Massachusetts IPO scene. Now, let’s look at New York. Unlike MA’s robust public company ecosystem, where I counted 33 public innovation economy companies with greater than $1 billion in market capitalization, I was shocked to discover how very few similarly situated public companies exist in NY. AOL ($2B) Intralinks ($1B) TakeTwo Interactive ($1B) I’m sure I must be missing a few, but my informal survey of NY VCs, bankers and entrepreneurs didn’t yield any others. That said, when you analyze the pipeline of IPO candidates, you begin to see a very different picture. Source: Business Insider, additional research As far as I know, none of these companies has yet registered to go public.

The 'interestingness curators' of social news David Rowan Editor of Wired magazine I write The Digital Life, a monthly tech column in our sister Conde Nast magazine, GQ. This is my column from last month's issue (dated December). Maria Popova calls herself an "interestingness curator". It's more an obsessive hobby than a job -- Popova works in New York for an ad agency -- but to thousands of iPad users @brainpicker now serves as a radical new form of daily magazine. In his prescient 1995 book Being Digital, Nicholas Negroponte, the visionary founder of MIT's Media Lab, described how customised daily news would one day find you through "personal filters" that would understand your desires and interests. Welcome to the new era of social curation. Popova, for one, is convinced. It seems I'm not alone: a Pew survey of more than 2,200 Americans recently found that 75 percent of news consumed online was via links from social networking sites or email. It's a welcome trend -- with two qualifications. David Rowan is editor of WIRED magazine