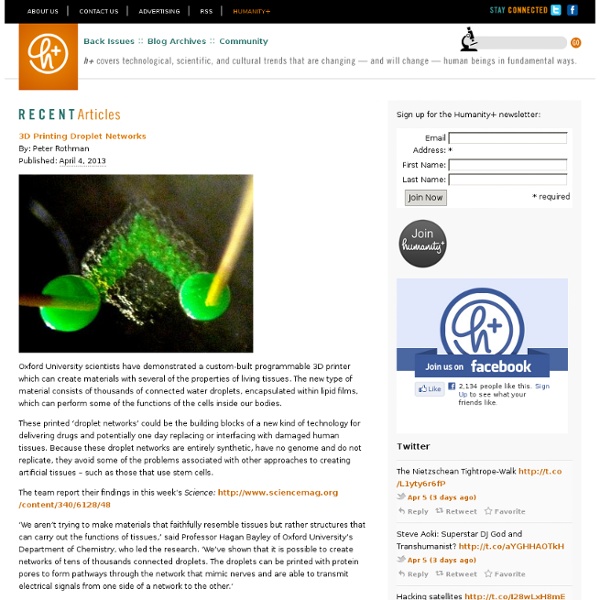 Peter Rothman Oxford University scientists have demonstrated a custom-built programmable 3D printer which can create materials with several of the properties of living tissues. The new type of material consists of thousands of connected water droplets, encapsulated within lipid films, which can perform some of the functions of the cells inside our bodies. These printed 'droplet networks' could be the building blocks of a new kind of technology for delivering drugs and potentially one day replacing or interfacing with damaged human tissues. The team report their findings in this week's Science: 'We aren't trying to make materials that faithfully resemble tissues but rather structures that can carry out the functions of tissues,' said Professor Hagan Bayley of Oxford University's Department of Chemistry, who led the research. Each droplet is an aqueous compartment about 50 microns in diameter. Related:  Meterials • Green • Cyborg Tissues

Scientists Create New Ear Using 3D Printing And Living Cell Injections WASHINGTON -- Printing out body parts? Cornell University researchers showed it's possible by creating a replacement ear using a 3-D printer and injections of living cells. The work reported Wednesday is a first step toward one day growing customized new ears for children born with malformed ones, or people who lose one to accident or disease. It's part of the hot field of tissue regeneration, trying to regrow all kinds of body parts. If it pans out, "this enables us to rapidly customize implants for whoever needs them," said Cornell biomedical engineer Lawrence Bonassar, who co-authored the research published online in the journal PLoS One. This first-step work crafted a human-shaped ear that grew with cartilage from a cow, easier to obtain than human cartilage, especially the uniquely flexible kind that makes up ears. Wednesday's report is "a nice advancement," said Dr. Three-dimensional printers, which gradually layer materials to form shapes, are widely used in manufacturing.

Aerogel A block of aerogel in a person's hand Aerogel was first created by Samuel Stephens Kistler in 1931, as a result of a bet with Charles Learned over who could replace the liquid in "jellies" with gas without causing shrinkage.[3][4] IUPAC definition Gel comprised of a microporous solid in which the dispersed phase is a gas. Note 1: Microporous silica, microporous glass, and zeolites are common examples of aerogels. Note 2: Corrected from ref. [4], where the definition is a repetition of the incorrect definition of a gel followed by an inexplicit reference to the porosity of the structure. [6] Properties[edit] A flower is on a piece of aerogel which is suspended over a flame from a Bunsen burner. Aerogels are good thermal insulators because they almost nullify two of the three methods of heat transfer (convection, conduction, and radiation). Owing to its hygroscopic nature, aerogel feels dry and acts as a strong desiccant. Knudsen effect[edit] Materials[edit] Silica[edit] Carbon[edit] Alumina[edit]

Bionic humans are about to get an upgrade, thanks to monkey cyborgs A - Given that decoding the human genome went from being something incredibly complex that would cost millions and take years to do, to something that can be done via mail-order and a couple hundred bucks in just a couple of decades, I doubt that it'll be centuries before we understand the human brain. Probably more like a few decades. B - We needn't develop directly analogous bionics to be a significant threat to what exists in nature (and ourselves). Consider an autonomous supply chain that was able to recreate all of its components without human intervention, perfect generational copying, as well as guided evolution of new versions. First of all, we don't need to understand the brain perfectly to make good bionics. Keep in mind that all the information on how to make the brain is stored in the human DNA, which is much less complex system than the brain itself.

Merging bioengineering and electronics: Scientists grow artificial tissues with embedded nanoscale sensors A multi-institutional research team has developed a method for embedding networks of biocompatible nanoscale wires within engineered tissues. These networks—which mark the first time that electronics and tissue have been truly merged in 3D—allow direct tissue sensing and potentially stimulation, a potential boon for development of engineered tissues that incorporate capabilities for monitoring and stimulation, and of devices for screening new drugs. The researcher team—led by Daniel Kohane, MD, PhD, in the Department of Anesthesia at Boston Children's Hospital; Charles M. Lieber, PhD, at Harvard University; and Robert Langer, ScD, at the Massachusetts Institute of Technology—reported their work online on August 26 in Nature Materials. One of the major challenges in developing bioengineered tissues is creating systems to sense what is going on (e.g., chemically, electrically) within a tissue after it has been grown and/or implanted.

A 3D printer that manufactures new cancer drugs with drag-and-drop DNA Although, my profs have lamented (many times) that the efficiency of combinatorial chemistry to screen for new drugs is ridiculously low for its cost. De novo synthesis has been responsible for only 1 FDA approved drug (Sorafenib: a tyrosine kinase inhibitor used to treat kidney and liver cancer), although quite a few more are working their way through trials. Most drug discoveries still depends on regular scientists stumbling onto something by serendipity or by following leads produced by those studying plant/animal/mineral sources. Right now, this kind of high-throughput robotic screening is mostly done to polish an already discovered molecule to adjust it's pharmacologic profiles (which is how we now have so many different types of taxanes). oops, I think I confused rational drug design (what you are talking about) which pure combinatorial chemistry (which the machine in the article facilitates and is a more scattershot "toss everything on the wall and see what sticks" approach).

Company develops new fiber-reinforced wood, concrete ink for 3D printing Even though 3D printing is an emerging market and technology, aside from Defense Distributed’s gun, it seems like it has hit a plateau. You can make little or somewhat-bigger-than-little figurines, teacups and mugs that often have leaks, or fragile parts — such as gears — that you can include in a working item, but might quickly wear down. One of the things holding 3D printing back is the material used to print objects. A San Francisco-based company, Emerging Objects, has created new printing materials that aren’t just plastic, but composed of wood, concrete, and even salt. For the uninitiated, normal 3D printing is additive. Emerging Objects has developed a wealth of new materials, such as paper (made from recycled newsprint) as well as a printable salt material. Along with giving a new look to 3D-printed objects, Emerging Objects’ new materials are more environmentally friendly than plastics. As for what Emerging Objects envisions its new materials creating?

Mind-Controlled Videogames Become Reality Exploiting Bacteria to Produce "Living Materials" A group of researchers at the Massachusetts Institute of Technology have unveiled a system whereby bacterial cells are engineered in such a way that they incorporate specific non-living materials into their biofilms, creating a "living material". Biofilms are generated when bacteria cluster together and stick onto a surface. Often the bacteria will secrete substances that assist in this adherence, such as proteins and carbohydrate polymers (called polysaccharides) which form a slime. Numerous different species of bacteria have been found to form biofilms including E. coli and P. aeruginosa​, and often more than one bacterial species is found within a biofilm. Researchers have generated a system whereby they can exploit these biofilm producers by cajoling the bacteria into incorporating non-living materials into their biofilms, such as gold nanoparticles. But that's not all they did. The researchers hope to continue with this exciting work.

Next Time Your Mom Says Don't Go Out in The Rain, Spray Yourself With This : Krulwich Wonders... OK, this is an ad. I can't vouch for it. I'm almost embarrassed to be showing it to you. But you have to take a look. When I saw it yesterday, I had to pick my jaw off the floor. What is it? I have so many questions. Trolling various Internet sites, I found crazier questions, some of them sci-fi delightful. Which raises another question. Nanotechnology is starting to get interesting. I realize we don't have a lot of information about this product, not yet, and we may discover after a few months in general use, it turns out to be pretty basic water-resister, not unlike many products already on the market, in which case, my hat goes off to whoever wrote and shot that video.