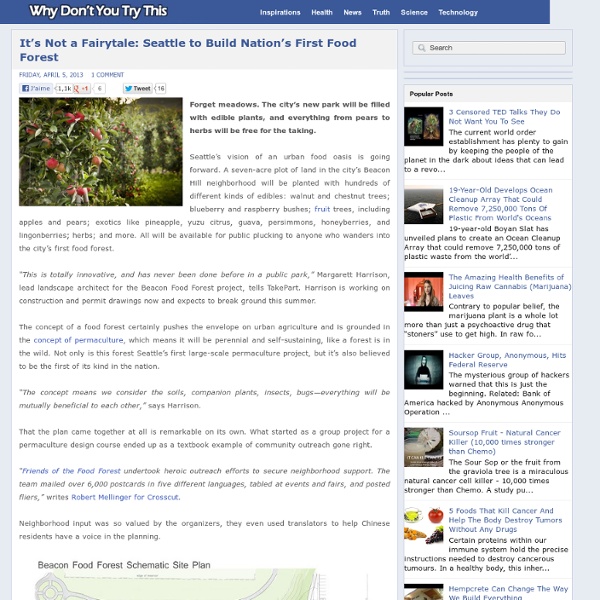 Forget meadows. The city’s new park will be filled with edible plants, and everything from pears to herbs will be free for the taking. Seattle’s vision of an urban food oasis is going forward. A seven-acre plot of land in the city’s Beacon Hill neighborhood will be planted with hundreds of different kinds of edibles: walnut and chestnut trees; blueberry and raspberry bushes; fruit trees, including apples and pears; exotics like pineapple, yuzu citrus, guava, persimmons, honeyberries, and lingonberries; herbs; and more. “This is totally innovative, and has never been done before in a public park,” Margarett Harrison, lead landscape architect for the Beacon Food Forest project, tells TakePart. The concept of a food forest certainly pushes the envelope on urban agriculture and is grounded in the concept of permaculture, which means it will be perennial and self-sustaining, like a forest is in the wild. That the plan came together at all is remarkable on its own. Source: Take Part Related: Related:  High Street Green

Floating Islands to bring Agriculture & Industry to Haiti Boston-based architect E. Kevin Schopfer in collaboration with Tangram 3DS (visualization) envisions”Harvest City” in Haiti as a floating agricultural / light industrial city off the shores of the island. Harvest City would be a vibrant fully functioning city of 30,000 residents which embraces three major concepts. 1. 2. 3. In addition to accommodating city services, Harvest City has been designed with an integral program of economic capabilities. Source: Evolvo via Tangram 3DS

Growing Power News "Commercial Urban Agriculture" Urban agriculture contributes nutritious, flavorful food to communities through year-round local food production. The ability to produce and distribute food throughout local neighborhoods is important as the demand for nutritional, good-tasting food continues to grow throughout the country. It is crucial that this healthy food be available to individuals and families in ALL neighborhoods! While healthy food production is perhaps the most important aspect of urban agriculture, other benefits abound as well. Growing Power’s Commercial Urban Agriculture Training Program will help you to manage your own farming business, while allowing you to learn on-site; actually practicing the hands-on skills needed to profitably farm in the city. This practical adult education training program is designed to assure that you will have the tools to begin your urban farming project when the training concludes. February 20, 21, 22 March 20, 21, 22 April 10, 11, 12 May 1, 2, 3 June 12, 13, 14 Cost: Farming

7 Benefits to Bringing Nature Back to Cities Nature scarcity in cities has been observed for centuries. Only recently have we detailed the acute symptoms of separation anxiety felt by urban society. Urban greening creates projects that simultaneously restore our health and invite plants and animals to reclaim their place among us. The first step to reconnecting to the natural world may be rethinking the appropriate daily dose. The Biophilic Cities Project, led by Tim Beatley at University of Virginia, proposes everyone would benefit from consuming his or her “minimum daily requirement of nature,” similar to caloric intake requirements. The reconstructed nature pyramid dishes out portions from a bite-sized serving of walking to work under a street forest canopy, to annual banquets of vacations in awe-inspiring wilderness areas. Some leading cities are making a balanced nature diet part of their long-term planning by engaging residents in multi-use projects. 1. 2. 3. 4. 5. 6. 7. – Miles Becker | 17 February 2014 Sources: 1. 2. 3. 4.

sustainable development Vast underground bomb shelter reappropriated by urban farmers A network of tunnels 33 metres under Clapham in London, originally built as a WWII bomb shelter, is being used to grow a range of different salad vegetables destined for Londoners' plates. This week, Wired.co.uk paid a visit to the subterranean farm, descending the winding steps deep into the bowels of southwest London. The space is enormous. The space -- owned by Transport for London -- has been lying dormant since WWII, when it was used as a bomb shelter that could accommodate 8,000 people. The end of one of the tunnels is illuminated, providing a ghostly glow that seeps towards us. Zero Carbon Food and was launched by Dring and Ballard -- who have been friends since school --- with the aim of using redundant underground spaces to produce leafy greens, herbs and microgreens for sale within the M25, using 70 percent less water versus traditional open-field farming methods and providing year-round production, reducing food miles for retailers and consumers.

High-Tech Supermarket Farm to Grow Food for Cities in The Netherlands Back in the day, a polder in the Netherlands was capable of providing all the necessary food for a nearby town. As the nation’s population has grown and diversified it relies less on locally produced food and more on regions known for their warm and sunny climates. The Netherlands isn’t endowed with a warm and sunny growing season, and with the influx of a diverse population from all over the world, the demand for foreign foods has dramatically increased. Van Bergen Kolpa Architecten propose taking over a polder landscape and transforming it into the farm of the future, which could serve the Randstand metropolitan region (consisting of Amsterdam, Rotterdam, The Hague, and Utrecht). New climate zones and landscapes would be created based on the type of food produced, such as pandan-en risotto rice on water terraces, tilapia fish in basins, and kiwis and avocados along undulating fruit walls. + Van Bergen Kolpa Architecten Via Co.Design Images © Van Bergen Kolpa Architecten

2015 Gates Annual Letter There is overwhelming evidence that people care about others who are suffering—when they can see the suffering. Just think of the global outpouring of support whenever a devastating tsunami or earthquake makes the news. The problem is that ongoing tragedies like deadly diseases and poverty don’t make the news. They’re invisible to many of us. And so the caring of millions of people goes untapped. We hope to help change that. It is called Global Citizen, and you can sign up at globalcitizen.org. Global citizens have an especially important role to play this year. We hope the goals adopted this year continue that work.

Top Five Most Sustainable Cities in the World From using renewable energy to cutting back on emissions, five cities across the globe are leading the way when it comes to implementing sustainable initiatives. Vancouver, Canada Consistently performing well in worldwide “livable city” rankings, Vancouver has an ambitious goal of becoming the “the greenest city in the world” by 2020. Thanks to mass transit, bike lanes (248 miles worth), ride sharing programs, and greenways, Vancouver has the lowest per capita carbon emissions of any major city on the continent. As part of their 2020 goals, they aim to decrease emissions an additional 33 percent, while also enacting strict green building codes (all new developments must be carbon neutral) and improving the energy efficiency of existing structures by 20 percent. One area where Vancouver could improve is in their use of electric vehicles. San Francisco, U.S. “Why do we do all this?” Oslo, Norway Curitiba, Brazil Copenhagen, Denmark Better yet, just grab your bike. Illustration by Dan Matutina