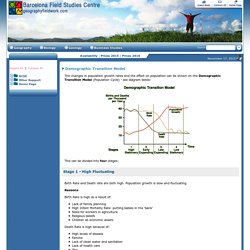 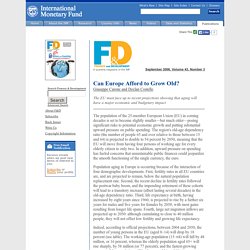 Giuseppe Carone and Declan Costello The EU must face up to recent projections showing that aging will have a major economic and budgetary impact The population of the 25-member European Union (EU) in coming decades is set to become slightly smaller—but much older—posing significant risks to potential economic growth and putting substantial upward pressure on public spending. The region's old-age dependency ratio (the number of people 65 and over relative to those between 15 and 64) is projected to double to 54 percent by 2050, meaning that the EU will move from having four persons of working age for every elderly citizen to only two. In addition, upward pressure on spending has fueled concerns that unsustainable public finances could jeopardize the smooth functioning of the single currency, the euro.

Population aging in Europe is occurring because of the interaction of four demographic developments. Dramatic repercussions for growth and labor. The Britons who can't afford to become old. It's a balmy evening in May 2039. 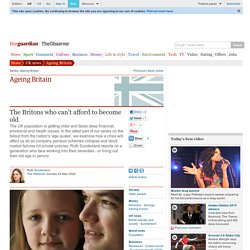 A gathering of smartly dressed, silver-haired people are raising their champagne glasses to toast the retirement of their company's longest-serving employee, who is leaving at the age of 83, after 60 years' service. The youngsters, still in their 50s and 60s, know they have several decades ahead of them before they can afford to retire. A dystopian fantasy? Not according to pensions experts, who warn that the UK faces a retirement crisis so huge it could make the credit crunch look like a blip. If we continue on our current course, Britain will simply not be able to afford to grow old: the only hope of averting wholesale misery in retirement, they say, is for us to accept we will have to work longer, consume less and save more. The idea that the experience of a generation of better-off pensioners can be replicated in future, with people taking retirement in their 50s and living a prosperous, leisured lifestyle is just not possible, the specialists say.

An Aging Population—Burden or Blessing? - Williams - 2005 - Value in Health. Ageing population is a blessing not a burden. Population ageing is, as the UN has described, one of the defining demographic features of modern times. 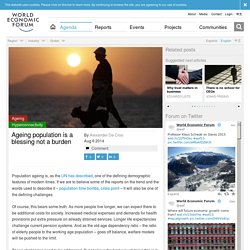 If we are to believe some of the reports on the trend and the words used to describe it – population time bombs, crisis point – it will also be one of the defining challenges. Of course, this bears some truth. As more people live longer, we can expect there to be additional costs for society. Increased medical expenses and demands for health provisions put extra pressure on already strained services. Longer life expectancies challenge current pension systems. These challenges need to be addressed.

At the recent Summit on the Global Agenda, ageing populations were positively defined as “our only growing natural resource”. We all know that demographics drive demand. But does this consumer approach fulfil the hidden potential of ageing populations? Let’s take the example of the labour market. Increased autonomy is also important.