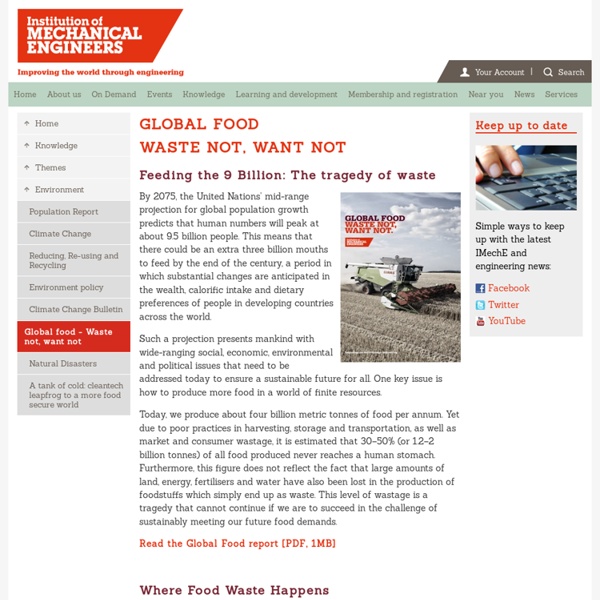 Feeding the 9 Billion: The tragedy of waste By 2075, the United Nations’ mid-range projection for global population growth predicts that human numbers will peak at about 9.5 billion people. This means that there could be an extra three billion mouths to feed by the end of the century, a period in which substantial changes are anticipated in the wealth, calorific intake and dietary preferences of people in developing countries across the world. Such a projection presents mankind with wide-ranging social, economic, environmental and political issues that need to be addressed today to ensure a sustainable future for all. Today, we produce about four billion metric tonnes of food per annum. Read the Global Food report [PDF, 1MB] Where Food Waste Happens In 2010, the Institution of Mechanical Engineers identified three principal emerging population groups across the world, based on characteristics associated with their current and projected stage of economic development. Developed Nations 1. 2. Related:  Reducing food waste

Virtual Water - Discover how much WATER we EAT everyday The good news is that each one of us can also make the world a little more water secure, ready to face the needs of our peak population future. How? The answer lies in our shopping baskets. The amount of meat in our diet is crucial! The average daily water consumption of a meat-eating person is 5000 litres of water per day. The type of meat we consume is crucial! The food we waste is crucial! So, do not forget: one meat-free-day a week choose meat raised on grass do not waste food Overfilling kettles wastes £68m a year, says report 3 July 2013Last updated at 23:06 ET Some 40% of people boiled water five times a day or more, the study found Three-quarters of British households overfill their kettles, wasting a total of £68m each year, an Energy Saving Trust (EST) report has suggested. The study of 86,000 households also found the average shower lasted seven-and-a-half minutes. A minute less and £215m would be saved, the EST said. Washing clothes at 30C and filling kettles to the required amount were among ways to save money, it added. It said people must not think they were "powerless to control our water use". The EST found British homes collectively used nine billion litres of water a day with showers using a quarter of that and toilets using 22%. Kitchen appliances, such as kettles, dishwashers and washing machines - together with taps - also used 22% of household water, the report said. The study found 95% of people boiled the kettle every day with 40% boiling water five times a day or more. “Start Quote

Compost Guy | Turning Wastes Into Resources Raw waste water use on farms is '50% higher' than estimated Image copyright Nana Kofi Acquah/IWMI The global use of untreated waste water from cities to irrigate crops is much more widespread than previously estimated, says a new report. According to this updated assessment, nearly 30 million hectares are now using untreated water within 40km of an urban centre Some 800 million people, including farmers, vendors and consumers are said to be exposed to serious health risks. China, India, Pakistan, Mexico and Iran account for most of the treated land. The huge populations in big cities across the developing world make very attractive markets for farmers. The lack of refrigeration and transport means that crops need to be grown close to these consumers. Image copyright NEIL PALMER/IWMI "Some might call it sewage, but it's mostly domestic waste water, although it can contain industrial effluent," says study co-author Dr Pay Drechsel, from the International Water Management Institute (IWMI). Image copyright Neil Palmer/IWMI

Gardeners Sharing Their Harvest With A Community Food Pantry At This Free Food Festival, All The Ingredients Are Food Waste At the Feeding the 5000 food festival in New York City, the first thing people walking by may notice is that all the food is free. It isn't obvious, though, that all the offerings are made from food waste. A torte is made with trimmings and peelings from a food distributor; a "quick pickle salad" is made with surplus greens and vegetables. Dan Barber, head chef and co-owner of Manhattan's Michelin-starred Blue Hill, will offer a limited number of cookies made with the almond flour left over when manufacturers make almond oil. Other chefs will also offer cooking demonstrations with food that might otherwise be thrown out. "I like the idea of changing people's habits and minds through pleasure and hedonism and enjoyment," says Barber. Feedback, an environmental organization focused on ending food waste, has hosted similar day-long festivals in Paris, Amsterdam, and other cities in Europe and Australia. The festival will be on May 10 at Union Square Park in Manhattan, and May 18 in D.C.

Half of all US food produce is thrown away, new research suggests | Environment Americans throw away almost as much food as they eat because of a “cult of perfection”, deepening hunger and poverty, and inflicting a heavy toll on the environment. Vast quantities of fresh produce grown in the US are left in the field to rot, fed to livestock or hauled directly from the field to landfill, because of unrealistic and unyielding cosmetic standards, according to official data and interviews with dozens of farmers, packers, truckers, researchers, campaigners and government officials. From the fields and orchards of California to the population centres of the east coast, farmers and others on the food distribution chain say high-value and nutritious food is being sacrificed to retailers’ demand for unattainable perfection. “It’s all about blemish-free produce,” says Jay Johnson, who ships fresh fruit and vegetables from North Carolina and central Florida. “What happens in our business today is that it is either perfect, or it gets rejected.