A Small Group of Companies Have Enormous Power Over the World 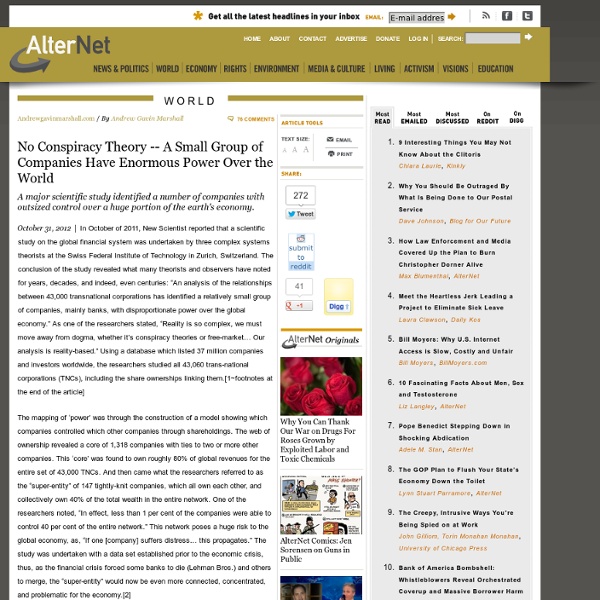 October 31, 2012 | Like this article? Join our email list: Stay up to date with the latest headlines via email. In October of 2011, New Scientist reported that a scientific study on the global financial system was undertaken by three complex systems theorists at the Swiss Federal Institute of Technology in Zurich, Switzerland. The mapping of ‘power’ was through the construction of a model showing which companies controlled which other companies through shareholdings. The top 50 companies on the list of the “super-entity” included (as of 2007): In the United States, five banks control half the economy: JP Morgan Chase, Bank of America, Citigroup, Wells Fargo, and Goldman Sachs Group collectively held $8.5 trillion in assets at the end of 2011, which equals roughly 56% of the U.S. economy.

Occupy's New Offshoot Set to Cancel Millions in Medical Debts Click here to support news free of corporate influence by donating to Truthout. Help us reach our fundraising goal so we can continue doing this work! (Photo: Steve Rhodes / Flickr)Medical debt is the cause of 62 percent of bankruptcies, say organizers of Strike Debt, which threw last night's offbeat fundraiser for their new “Rolling Jubilee.” Ordinary people donated enough money to collectively buy an estimated $5.9 million in bad debt in order to cancel it. On the first anniversary of Occupy Wall Street's eviction from Zuccotti Park, celebrity and local performers donated their time for a "post-modern variety show" last night at Manhattan's Le Poisson Rouge nightclub. They were there to raise money for what may be the most far-reaching project to grow out of the Occupy movement so far: a "bailout for the 99 percent" called Rolling Jubilee. The event had been planned as a launch party for Rolling Jubilee, which opened its bank account on Friday, November 9.

CHAMP - lights out Master player for Feature page - duplicate this player for individual business unit pages, features, etc. AFRL image This artist's rendering shows a CHAMP flying over a target A recent weapons flight test in the Utah desert may change future warfare after the missile successfully defeated electronic targets with little to no collateral damage. Boeing and the U.S. CHAMP, which renders electronic targets useless, is a non-kinetic alternative to traditional explosive weapons that use the energy of motion to defeat a target. Power is cut to a room of computers after being hit by a high-powered microwave pulse from a Counter-electronics High-powered Advanced Missile Project. During the test, the CHAMP missile navigated a pre-programmed flight plan and emitted bursts of high-powered energy, effectively knocking out the target's data and electronic subsystems. "This technology marks a new era in modern-day warfare," said Keith Coleman, CHAMP program manager for Boeing Phantom Works.

How Higher Education in the US Was Destroyed in 5 Basic Steps Photo Credit: Steven Frame via Shutterstock.com A few years back, Paul E. Lingenfelter began his report on the defunding of public education by saying, “In 1920 H.G. Wells wrote, ‘History is becoming more and more a race between education and catastrophe.’ I think he got it right. In the last few years, conversations have been growing like gathering storm clouds about the ways in which our universities are failing. To explain my perspective here, I need to go back in time. I suspect that, given the opportunity, those groups would have liked nothing more than to shut down the universities. So: here is the recipe for killing universities, and you tell me if what I’m describing isn’t exactly what is at the root of all the problems of our country’s system of higher education. Step I: Defund public higher education. Again, from Anna Victoria: Under the guise of many “conflicts,” such as budget struggles, or quotas, defunding was consistently the result. Anna Victoria writes: So now what?

EXCLUSIVE: Dick Armey Dishes On FreedomWorks' Deals With Beck & Limbaugh | Blog Former FreedomWorks chairman Dick Armey says the conservative outlet that helped launch the Tea Party paid Glenn Beck at least $1 million last year to fundraise for the organization, an arrangement he said provided "too little value" for the money. "The arrangement was simply FreedomWorks paid Glenn Beck money and Glenn Beck said nice things about FreedomWorks on the air," Armey, the former House majority leader, told Media Matters Friday. "I saw that a million dollars went to Beck this past year, that was the annual expenditure." Armey, who left the organization this past fall after a dispute over its internal operations, said a similar arrangement was also in place with Rush Limbaugh, but did not know the exact financial details. "I put it down now as basically as paid advertising for FreedomWorks by Beck," Armey said, calling it a mistake. From the leaked FreedomWorks document: Beck has been reading on-air appeals for FreedomWorks since at least April 2010.

Find It By Topic - Work Hours - Breaks and Meal Periods Breaks & Meal Periods Federal law does not require lunch or coffee breaks. However, when employers do offer short breaks (usually lasting about 5 to 20 minutes), federal law considers the breaks as compensable work hours that would be included in the sum of hours worked during the work week and considered in determining if overtime was worked. Unauthorized extensions of authorized work breaks need not be counted as hours worked when the employer has expressly and unambiguously communicated to the employee that the authorized break may only last for a specific length of time, that any extension of the break is contrary to the employer's rules, and any extension of the break will be punished. Bona fide meal periods (typically lasting at least 30 minutes), serve a different purpose than coffee or snack breaks and, thus, are not work time and are not compensable. DOL Web Pages on This Topic Wage and Hour Division's Frequently Asked Questions Answers questions about breaks.

Girl Scout Cookie Recipes: Thin Mints, Samoas And More In a few months, eager young Girl Scouts will set out to knock on doors and check off boxes in an attempt to sell the organization's beloved cookies. Employees everywhere -- probably even in your own office -- will huddle around the desk of a coworker helping out in their child's sales. For weeks, buying Girl Scout cookies becomes somewhat of a national frenzy. But we at HuffPost Taste are curious: If these cookies are worth causing such a ruckus, why wait? Call us blasphemous, but we believe most Girl Scout cookies are easily replicable. We tracked down a recipe for nearly every Girl Scout cookie being sold so you can try them out before the frenzy begins. Loading Slideshow Also on HuffPost: