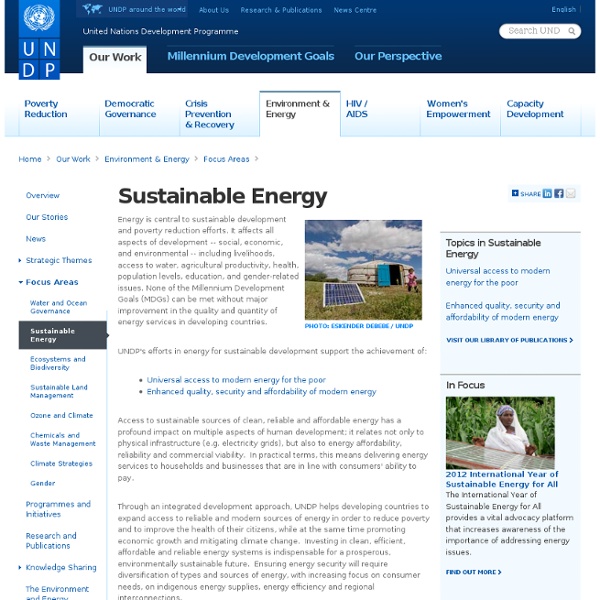 Energy is central to sustainable development and poverty reduction efforts. It affects all aspects of development -- social, economic, and environmental -- including livelihoods, access to water, agricultural productivity, health, population levels, education, and gender-related issues. None of the Millennium Development Goals (MDGs) can be met without major improvement in the quality and quantity of energy services in developing countries. UNDP's efforts in energy for sustainable development support the achievement of: Access to sustainable sources of clean, reliable and affordable energy has a profound impact on multiple aspects of human development; it relates not only to physical infrastructure (e.g. electricity grids), but also to energy affordability, reliability and commercial viability. UNDP is helping developing countries to achieve these outcomes through the provision of sound policy advice and a focus on three key areas of intervention:

Rio+20: sustainable energy for all | Guardian Sustainable Business "It (energy) is the golden thread that connects economic growth, increased social equity and preserving the environment. We are here to build a new energy future, a future that harnesses the power of technology and innovation in the service of people and the planet," - UN Secretary-General, Ban Ki-moon This year the United Nations Conference on Sustainable Development (Rio+20) is taking place in Brazil on 20-22 June, marking the 20th anniversary of the 1992 United Nations Conference on Environment and Development, which also took place in Rio. At the Rio+20 Conference, the UN Secretary-General will highlight a global initiative launched in September 2011 that focuses on achieving Sustainable Energy for All. • Achieving universal access to modern energy services. • The research identified a minority of high-profit, high-growth companies. • Doubling the share of renewable energy in the world's energy mix. To download the full report, please click here.

Mapa empremta ecològica Rio+20: Secretary General Ban Announces More Than 100 Commitments on Sustainable Energy RIO--(ENEWSPF)--21 June 2012. Speaking at the United Nations Conference on Sustainable Development (Rio+20), Secretary-GeneralBan Ki-moon today announced that more than one hundred commitments and actions have been already mobilized in support of the UN’s global sustainable energy initiative. “Achieving sustainable energy for all is not only possible, but necessary – it is the golden thread that connects development, social inclusion and environmental protection,” Secretary-General Ban said at a press conference at Rio+20, in Rio de Janeiro, Brazil. Launched in September 2011, the Sustainable Energy for All initiative brings together governments, businesses and civil society groups in an unprecedented effort to help make the world’s energy systems more accessible, efficient and cleaner. “This initiative is already mobilizing significant action from all sectors of society. “Sustainable Energy for All provides a powerful model for the future,” the UN chief said. Source: un.org

The Future of Energy: A Realist's Roadmap to 2050 This December, when representatives from 170 countries meet at the United Nations climate talks in Copenhagen to replace the expiring Kyoto climate treaty, the smart money predicts unprecedented collaboration. American political change coupled with spiking carbon dioxide levels could inspire a communal project on a scale not seen since World War II. A consensus, backed by science, is emerging among the international community that by 2050 we need to reduce emissions of C02, methane and other greenhouse gases to approximately 80 percent lower than they were in 1990. It will mean a wholesale reinvention of the global energy economy; anything less could result in catastrophe. To reach this goal will require a two-pronged approach. Solar Power Harnessing the terrawatts of energy we get from the sun Hydro Power Subtle movements create current Biofuels Beyond ethanol Wind Power Turbines to take root in the sea Safer Nuclear Six Generation III+ reactors set for the U.S. Geothermal Energy

The Solvable Problem of Energy Poverty This story is part of a special series that explores energy issues. For more, visit The Great Energy Challenge. The United Nations’ goals for fighting extreme poverty—an effort being assessed at a summit this week in New York—will fall short unless nations also work to bring electricity and modern, safe cooking technology to the billions of “energy-poor” people around the globe, a new report says. The worsening problem of energy poverty, however, can be solved without breaking the banks of nations—and without a significant worsening of the climate change problem, said the study released Tuesday by the International Energy Agency (IEA) and two UN bodies, the Development Programme (UNDP) and the Industrial Development Organization (UNIDO). “This is what is most compelling—the evidence that there is no reason why we should not make this commitment,” said Kamal Rijal, the UNDP’s policy adviser on sustainable energy and co-author of the report. More Deadly Than AIDS

The World’s Poor Deserve Greener Energy, Too With oil costing close to $100 a barrel, and most imported Asian coal about $120 a ton, fossil energy costs are crippling emerging economies in Asia and Africa. Although renewable alternatives are far less costly than they were even two years ago, they still can’t match the cheap coal and oil that Asia and Africa had counted on. Fortunately, if Asia and Africa embrace bottom-up renewable strategies, they can restrain energy costs, while leapfrogging dirty energy into the emerging post-fossil global economy. What are bottom-up strategies? They vary based on markets and geography. What they share is a realization that not all electrons are equal; some are worth far more than others, depending, in part, on their proximity to markets. There are 1.4 billion people without electricity, most of whom aren’t expected to have it for decades. Costly Lighting The poor already pay a lot for light, mostly from burning kerosene and candles. Obviously, the economics are compelling. Financing Options

Energy: The future of energy SINCE the industrial revolution 200 years ago, mankind has depended on fossil fuel. The notion that this might change is hard to contemplate. Greens may hector. Such a failure of imagination has been at the heart of the debate about climate change. Not everyone, however, is so pessimistic. This time it's serious Alternative energy sounds like a cop-out. For oil replacements, cheap suddenly looks less of a problem. Electrical energy, meanwhile, will remain cheaper than petrol energy in almost any foreseeable future, and tomorrow's electric cars will be as easy to fill with juice from a socket as today's are with petrol from a pump. The price is right They, too, are more and more likely to be alternative. Older, more cynical hands may find this disturbingly familiar. Of course, there was no geological shortage of oil, just a politically manipulated one. As these alternatives start to roll out in earnest, their rise, optimists hope, will become inexorable.

Energy+ approach for the poor