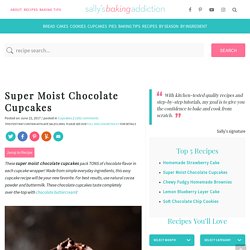 Made from simple everyday ingredients, this easy cupcake recipe will be your new favorite. For best results, use natural cocoa powder and buttermilk. These chocolate cupcakes taste completely over-the-top with chocolate buttercream! I apologize if the word “moist” freaks you out. But there’s really no other way to describe a chocolate cupcake like this! Today we’re diving deep into what I like to call a “foundation recipe.” This is a solid base recipe that serves as a jumping off point for many others. I shared the recipe 3 years ago, but I want to walk you through the process (1) with step-by-step pictures, (2) with careful explanations, (3) and I want to emphasize one VERY crucial instruction. Curious about other foundation recipes? 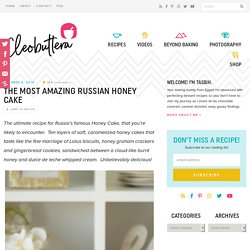 Ten layers of soft, caramelized honey cakes that taste like the fine marriage of Lotus biscuits, honey graham crackers and gingerbread cookies, sandwiched between a cloud-like burnt honey and dulce de leche whipped cream. Unbelievably delicious! Let’s just start off by saying that I don’t normally throw around words like “The Best,” “Best Ever” or “The Most Amazing” at any of my recipe titles that easily. Not because I don’t think they are…because I certainly do, otherwise you wouldn’t see them here…but because the definition of what makes something “the best” is very subjective.

With that said, I couldn’t hold it back with this one. It’s just that it’s so incredibly good, that it’s hard to imagine how anything could ever top it. So I guess I’m not alone on this one. Gluten-Free Cornmeal Cake Recipe. [Photographs: Elizabeth Barbone] Lighter than a pound cake, this gluten-free, dairy-free cornmeal cake goes well with just about anything. 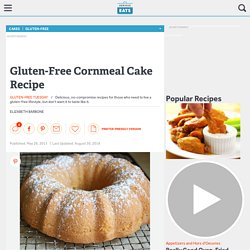 Serve it for breakfast with hot tea or coffee. Easy Cranberry Orange Cake Makes a Perfect Dessert for the Holidays. While culling my files for a dessert to use up the cranberries remaining in my fridge, something fortuitous happened. 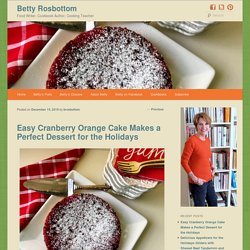 I was tagged on Instagram by a person whose handle is #bakerynerd. The writer posted that they had recently baked a cranberry orange upside down cake created by me! It took a few minutes to locate the recipe that had originally appeared in 1999 in my former syndicated column, “That’s Entertaining.” American Buttercream x Ganache = Double-Chocolate Frosting. [Photographs: Vicky Wasik] I don't think a baker can ever have too many recipes for any given dessert, and that's as true of buttercream as it is of chocolate chip cookies. 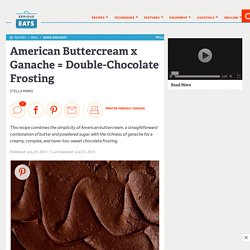 That's because what's "best" can vary depending on what ingredients one has on hand, how much time is available for the project, and/or what dietary considerations may be required, not to mention the degree of chocolate intensity your current craving may demand. Swiss Meringue Buttercream Recipe. German Buttercream (Whipped Vanilla Custard Frosting) Recipe. French Buttercream Frosting Recipe. White Cake With Brown Butter and Toasted Sugar Recipe. Medovik - Russian Honey Cake. 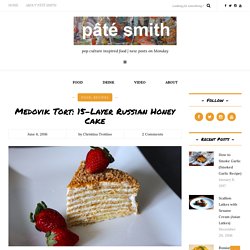 Seriously though–I made this once and a Russian bud of mine came over in lightning speed and waxed poetic about the nostalgia this cake inspires in relationship to growing up in Russia. And after eating this delicious, light dessert, I definitely understand why the Medovik Tort // Russian Honey Cake has a special place in the heart of Russians near and far.

Also referred to as an 8-layer Russian honey cake, the Medovik Tort has a delightfully light honey flavor and employs an incredible unique baking process. In short, the cake is made by making stiff (read: concerningly hard) discs of dough, layering them between ample amounts of sour cream frosting, and then letting the frosting soften the dough overnight in the fridge. Sounds freaky, right? The process might sound weird, and it’s because it is. Rolling dough discs. Layering dough discs with honey sour cream. Ingredients Instructions Summary. Rethinking American Buttercream: Still Quick and Easy, Just Better. Blueberry Cake Recipe. MethodHide Photos 1 Preheat oven and prepare springform pan: Preheat oven to 350°F. Buttermilk Spice Cupcakes with Maple Cream Cheese Frosting - Lindsay Ann Bakes. This is a great recipe for Fall time that doesn't involve pumpkin or apples, but still has all of the warm spices of the season. 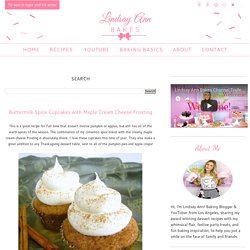 The combination of my cinnamon spice blend with the creamy maple cream cheese frosting is absolutely divine. I love these cupcakes this time of year. They also make a great addition to any Thanksgiving dessert table, next to all of the pumpkin pies and apple crisps! Flourless Lemon Almond Cake Recipe. 1 Preheat oven, prepare pan: Preheat the oven to 350°F (175 °C). 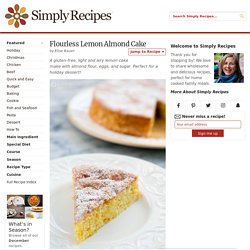 Place a round of parchment paper on the bottom of a 9-inch springform pan, and grease it and the sides of the pan with butter or cooking spray. 2 Beat egg yolks, lemon zest, 1/4 cup sugar: In a large bowl, beat together with a wooden spoon the egg yolks, lemon zest, and 1/4 cup sugar until smooth. 3 Whisk almond flour, cardamom, baking powder, beat into egg yolk mixture: In a separate bowl, whisk together the almond flour, ground cardamom, and baking powder. Add the flour mixture to the egg yolk mixture and beat until smooth. 4 Whip egg whites to soft peaks: With an electric mixer with a very clean bowl and clean whisk attachment, beat the egg whites, starting on low speed and gradually increasing the speed. When bubbles start to form, add a pinch of salt and the teaspoon of vinegar (both the salt and the vinegar will help the beaten egg whites maintain better structure, as will the sugar in the next step). Grain-Free Apple Honey Cake Recipe. 1 Preheat the oven and prepare a cake pan: Preheat the oven to 325ºF. 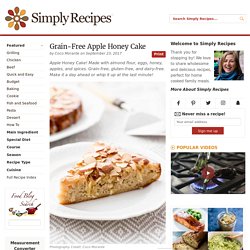 Grease an 8-inch cake pan and place a round of parchment in the bottom of the pan. 2 Make the cake batter: In a medium mixing bowl, whisk together the almond flour, cinnamon, nutmeg, and salt. Make a well in the center of the flour, then add in the eggs, honey, and oil. Whisk wet ingredients together in the middle, then gradually whisk in the flour from the sides of the bowl. Continue whisking until the batter is smooth. Angel Food Cake. How to Make Flour Buttercream (or Ermine Buttercream) Okay, time for the fourth post of my new ‘Battle of the Buttercreams’ series, featuring the second type of buttercream: flour buttercream! 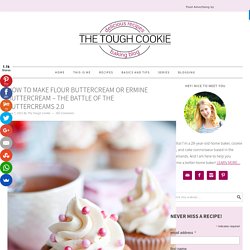 The buttercream that inspired me to do the original ‘Battle of the Buttercreams’ series one-and-a-half years ago. If you’ve missed the first three post of this fabulous new series, here they are: first, second, and third… The third post, which explains about the ‘beaten butter method’, is particularly important for today’s recipe. Salted Caramel Layer Cake - The JavaCupcake Blog. Brown Sugar-Bourbon Bundt Recipe. Reversed Impossible Chocolate Flan Recipe. Cranberry Streusel Upside-Down Cake. Make the streusel Combine the pecans, brown sugar, flour, cinnamon, and salt in a small bowl. Stir in the melted butter until well combined. Cranberry Upside Down Cake Recipe.

Baking times will vary, depending on the brand of flour, size of pan, thickness of sour cream. The batter should be gloppy, not runny, so add a little more flour to get to gloppy if your batter is too thin. Some readers have needed to cook this cake longer than the baking times indicated, so definitely test before turning out! Method 1 Generously butter the bottom and sides of a 9-inch diameter cake pan. Pumpkin Cupcakes With Cream Cheese Frosting. Martha Stewart Recipes. Burnt Sugar Bundt Cake. Cakes are special, and they are meant to be shared.

I may make a batch of cookies or pan of brownies on a whim or to satisfy a craving, but I usually reserve cakes for an occasion. Saturday night wasn’t anything extraordinary, just dinner with my in-laws. We started with spaghetti and meatballs. Dulce de leche bundt. Dulce de Leche Bundt It's Election Day! I hope you get out there and exercise your right to VOTE! And finally, we get back to Jamie Lee Curtis TV ads about her poop and yogurt instead of the endless political ads. It's Day #17 of I Like Big Bundts - my quest to bring you 30 Bundts in 30 Days! National Bundt Day is only a few days away. Dulce de Leche is caramelized yummy in a can. Brown Butter Pumpkin Layer Cake. User reviews made it? Pumpkin Rum Cake Recipe - Food.com - 259028. Lemon-Ginger Bundt Cake. Vanilla buttermilk cake. Mom's Chocolate Cake Recipe - Marcia Kiesel. Blackberry Buttermilk Cake: Recipe. Cranberry Upside-Down Cake. Maple Frosting (Italian Buttercream) Recipe.