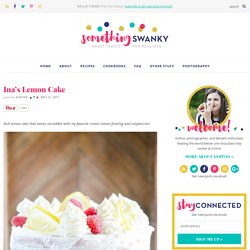 It’s that time of year! And no. I’m not referring to wearing swimsuits and looking cool by the pool I mean, far be it from me to tell you how to spend your time. But what I’m talking about is SUMMER FOOD! Burgers and S’mores and all things lemon and berry and fluffy whipped cream dessert salads. The first lemony-berry recipe you must make are these Lemon Blueberry Scones. But after that, you must come back and make Ina’s Lemon Cake with the most amaaaaaaaaazing cream cheese frosting. 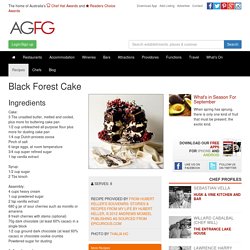 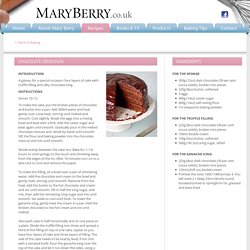 Serves 10–12 To make the cake, put the broken pieces of chocolate and butter into a pan. Add 300ml water and heat gently over a low heat, stirring until melted and smooth. Cool slightly. Break the eggs into a mixing bowl and beat with a fork. Divide evenly between the cake tins. To make the filling, sit a bowl over a pan of simmering water. Slice each cake in half horizontally and sit one piece on a plate.

PREPARE AHEAD - The cake can be made and assembled the day ahead and kept in the fridge – best to ice with the ganache icing on the day of serving. FREEZE - Cakes freeze well filled but not iced. AGA - Bake on grid shelf on the floor of the roasting oven, with the cold sheet on the second set of runners for about 35 minutes. Little chocolate whisky cakes recipe. Wolfgang's 16-layer Chocolate Cake Recipe. Chocolate Mousse: To prepare the chocolate cake: preheat the oven to 375 degrees F. 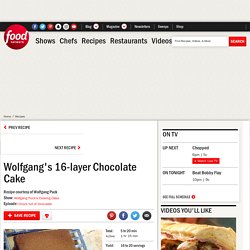 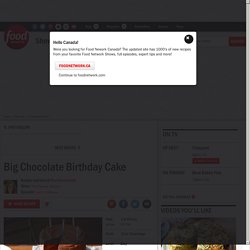 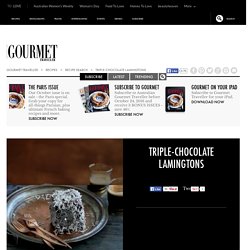 Melt half the chocolate and half the butter in a bowl over a saucepan of simmering water, stir until smooth and keep warm. Christmas recipe special: What top chefs eat at Christmas. Sam and Eddie Hart: Suckling pig There is nothing quite like a whole suckling pig for a special occasion. 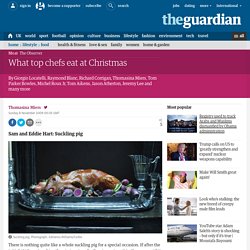 If after the initial 2½ hours' cooking the pig is not perfectly crisp, return it to the oven until it is. If you allow 3 hours to cook the pig and it actually cooks in 2½, it will happily rest in a warm place until you are ready to eat. Serves 10-12 5-6kg suckling pig2 heads of garlic2 shallots2 dried red peppers5 sprigs of thyme5 bay leaves2 sliced lemonsolive oilsalt and pepper Preheat the oven to 180ºC/gas 4. Black Forest Pavlova with Espresso Cream. Recipe, photography and styling by Tanya Zouev. 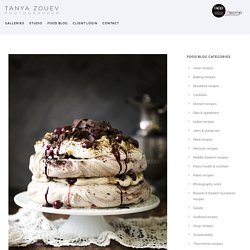 This weekend is Australia Day long-weekend. It’s been a weekend of celebrating with the quintessential Aussie barbie (BBQ), wearing the Australian flag printed on one’s t-shirt or bikini, screaming out “Aussie Aussie Aussie oi oi oi” (unfortunately) and eating lamingtons (very fortunately). For some however it’s eating pavlova, and I’ve seen a fair few of them proudly shown off on Facebook and the usual social media sites this weekend.

Now I know there’s some debate (actually, a lot of debate) around the exact origin of the pav, I’ve even discussed this in a recent post. Yes I know it hails originally from New Zealand but for many it is still a major part of Australia Day celebrations. During the few days leading up to Australia Day I was having some thoughts as to what makes up authentic Australian food, and there actually isn’t much. Roasted Plum and Almond Financiers Recipe. Blackberry and Lime Financiers – butter and brioche. After a relaxing, but brief, holiday break… it is time to get back into the routine of everyday life. 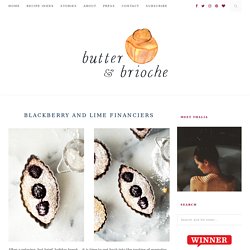 I had been resisting it at first, wanting to hang onto the last of lazing afternoons and evenings filled with laughter, spontaneity and birdsong. On returning home though, I was especially eager to get back into the kitchen and bake something. And it didn’t take long to settle on financiers. Financiers Recipe, Angel Delight & Limoncello. Raspberry Filled Christmas Tree Cookies - Queen of My Kitchen. I love Christmas cookies decorated with royal icing but they’re an absolute pain to make. 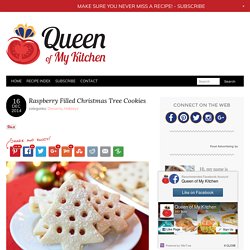 You have to mix up several batches of icing for all the different colors you want, fit multiple pastry bags with tips, and then carefully fill each bag with icing. All that before you even start decorating! It’s very time consuming and the clean up is no fun either. These stunning Christmas cookies are much less work but no less beautiful. The idea for these cookies comes from the The New York Times. Because these are essentially two individual cookies sandwiched together you’ll want to roll the cookie dough out fairly thin – to a thickness of about 1/16 inch. Gingerbread cake with cinnamon cream cheese frosting. Last gingerbread recipe for 2014, cross my heart. I know I have gone slightly gingerbread crazy lately but ’tis the season. And gingerbread in cake form is worth both the effort and the calories. This cake was made for my son’s nursery and I was madly scrambling to finish it and photograph it before having to deliver it (with a slice missing – I know, terrible, but they are used to my ways).

It was my son’s last nursery Christmas ‘play’ (I use that term very loosely) and there he was dressed in a crusader costume (not sure why – suspect it was simply available) singing Frosty the Snowman together with other slightly stunned kidlets. They were heartbreakingly cute. The cake was a big hit – solidifying my ‘cake lady’ status at nursery. How to bake a cake like Adriano Zumbo. By Matt Preston - Features - www.taste.com.au.

After years in the baking wilderness, Matt Preston learns the tricks of the trade from a top pastry chef. We all have gaps in our knowledge. You, for example, might be a whiz at quantum mechanics but struggle to change a flat tyre. My blind spots are cakes and making pastry. So it's no wonder I winced in sympathy while watching the recent CWA challenge unfold on MasterChef. While I might see myself as a dab hand at biscuits, that fear of failure has kept me from pulling out a pair of 20cm cake tins for any other reason than as improvised cymbals. The BEST Birthday Cake Recipe. It might not be your birthday. But don't let that stop you from making this perfect birthday cake recipe.

Make every birthday happier with this classic, perfect birthday cake! Photos via CakeSpy Birthday cake is one of the most common requests for cake decorators. It is a special food; it carries connotations of celebration and joyful indulgence, and it tastes like pure happiness. But how is it possible to attain perfectly fluffy layers that don't fall flat in the flavor department? As Julia Child once said, "a party without cake is just a meeting. " FREE Guide! Get insider tricks & inspiration to make one-of-a-kind buttercream goodies in this FREE PDF guide, available exclusively on Craftsy.Get My FREE Guide » White Chocolate Strawberry Buttercream. Oh yes I did. The recipe for White Chocolate Buttercream I have on The Bewitchin’ Kitchen is one of my most popular recipes.

I use it anytime I make cakes (with or whiteout the white chocolate). I knew I wanted do something different and I’ve been thinking about it for a while now, then it hit me: strawberries. I wanted to do a pretty cupcake for Valentine’s Day but I’m not the biggest fan of food coloring. So I opted to use strawberries instead. Look at how pretty? Under The Sea (Rainbow Cake With Passionfruit Curd) - Yahoo7. Pastel Rainbow Cake - i am baker. Rainbow Layer Cake With Raspberry Frosting in recipes at Lakeland. Preheat the oven to 180°C/Gas 4 and lightly grease the 5 pans with Cake Release.Break the eggs into a large mixing bowl and gently whisk. Add the remaining ingredients except the colours and mix until well combined. Divide the mixture evenly into 5 bowls then add the colours using a cocktail stick – as only very small amounts are required, take care to add just a little at a time then keep adding a little more until you reach your desired shade.

We started with just pink, then combined pink and red to create a darker shade of pink, then for the bottom two layers, mainly used violet with hints of pink and red.Transfer the mixtures into the pans, spreading them evenly then make a slight dip in the centre of each to help to achieve an even rise.Place all the pans in the oven, evenly spaced, and bake for 18 minutes until a skewer inserted into the middle of each cake comes out clean. Une Souche de Noël. Mais non, mes chéris, pas une bûche! Ntinental Christmas recipes: Chocolate Yule log. By Jo Pratt for MailOnline Updated: 23:51 GMT, 18 December 2009 The French finish their Christmas meal with a decadent 'buche de Noel' or Yule log, made from chocolate.

Millionaire’s Shortbread - Recipe from myTaste.co.uk. Gooey Lemon Crunch Recipe - Viva. Gooey lemon crunch. Picture / Babiche Martens. Friday July 29, 2016 If you like lemon slices or lemon curd, this crunch is for you. Tangy and delicious, eat warm with a blob of yoghurt or cool and then store in an airtight container. Don’t forget lemons do not ripen once removed from the tree, so enjoy looking at the bright yellow garden fruit and pick as needed.