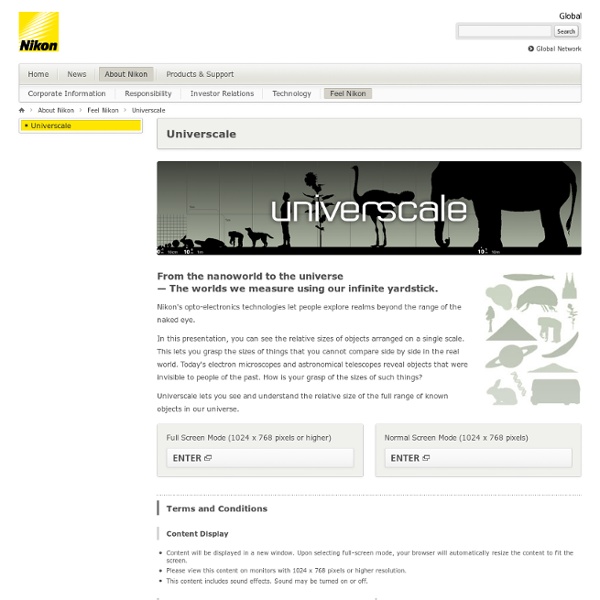 From the nanoworld to the universe — The worlds we measure using our infinite yardstick. Nikon's opto-electronics technologies let people explore realms beyond the range of the naked eye. In this presentation, you can see the relative sizes of objects arranged on a single scale. This lets you grasp the sizes of things that you cannot compare side by side in the real world. Today's electron microscopes and astronomical telescopes reveal objects that were invisible to people of the past. How is your grasp of the sizes of such things? Universcale lets you see and understand the relative size of the full range of known objects in our universe.

Compliance Policy Guides > CPG Sec. 400.400 Conditions Under Which Homeopathic Drugs May be Marketed The term "homeopathy" is derived from the Greek words homeo (similar) and pathos (suffering or disease). The first basic principles of homeopathy were formulated by Samuel Hahnemann in the late 1700's. The practice of homeopathy is based on the belief that disease symptoms can be cured by small doses of substances which produce similar symptoms in healthy people. The Federal Food, Drug, and Cosmetic Act (the Act) recognizes as official the drugs and standards in the Homeopathic Pharmacopeia of the United States and its supplements (Sections 201 (g)(1) and 501 (b), respectively). Until recently, homeopathic drugs have been marketed on a limited scale by a few manufacturers who have been in business for many years and have predominantly served the needs of a limited number of licensed practitioners.

MacRepertory - Kent Homeopathic Associates Let us introduce you to the new MacRepertory 8. Our repertorization tool, MacRepertory makes it easy to quickly select and analyze rubrics, get ideas for remedies, check the materia medica, do a bit of research and feel confident about your prescriptions. KHA offers two styles - MacRepertory Pro and MacRepertory Classic. Though both are powerful tools, MacRepertory Pro offers more advanced customization and analysis features than the Classic version. Both MacRepertory Pro and MacRepertory Classic are available with either the Core Library or the Full Library. A History of Homeopathy in Britain Homeopathy was introduced into the UK by Dr F.H.F. Quin (1799-1878) in the 1830′s. Born and schooled privately in London, Quin was of aristocratic birth, and is widely regarded as the love-child of Lady Elizabeth Cavendish (1758-1824), the Duchess of Devonshire and Sir Valentine Richard Quin, 1st Earl of Dunraven (1752-1824, visit the Dunraven webpage). Along with the Dukes of Westminster and Marlborough, the Dukes of Devonshire were at that time among the top five richest families in Britain (see Cannadine). After graduating MD in 1820 in Edinburgh (his thesis was about Arsenic poisoning), Dr Quin then became the Duchess’s family physician and travelled with her entourage. He met Hahnemann, and travelled extensively in Europe, residing for a time both in Rome and Naples.

Homeopathy in Russia Today by Dana Ullman, MPH The famous Russian author, Feodor Dostowevsky, wrote "The Brothers Karamozov," and in this great book he gives a short, sweet mention of homeopathy. In an argument between the two brothers, one of the brothers asked the other if he didn't have just a little faith in him, for as he said, "homeopathic doses are perhaps the strongest." Homeopathy has had a long tradition within Russia. Even though it was not officially recognized during the Communist regime, it was tolerated. Online Store - View Product People who use homeopathy today stand with CULTURAL GIANTS of the past and present! There are GOOD reasons that so many of the most successful and famous people over the past 200 years used and/or advocated for homeopathy. Read this book to learn some truly amazing real life stories of the use of homeopathy...and why YOU should too! 11 U.S. Presidents (!)

Homeopathy Homeopathy ( i/ˌhoʊmiˈɒpəθi/; also spelled homoeopathy; from the Greek: ὅμοιος hómoios, "-like" and πάθος páthos, "suffering") is a system of alternative medicine created in 1796 by Samuel Hahnemann based on his doctrine of like cures like, whereby a substance that causes the symptoms of a disease in healthy people will cure similar symptoms in sick people.[1] Homeopathy is considered a pseudoscience.[2][3][4] Homeopathy is not effective for any condition, and no remedy has been proven to be more effective than placebo.[5][6][7] Hahnemann believed the underlying causes of disease were phenomena that he termed miasms, and that homeopathic remedies addressed these. The British House of Commons Science and Technology Committee has stated: "In our view, the systematic reviews and meta-analyses conclusively demonstrate that homeopathic products perform no better than placebos.