Famous Immigrants Who Enriched America. Ten Ways Immigrants Help Build and Strengthen Our Economy. Jason Furman, Danielle Gray July 12, 2012 10:09 AM EDT America is a nation of immigrants. Our American journey and our success would simply not be possible without the generations of immigrants who have come to our shores from every corner of the globe. It is helpful to take a moment to reflect on the important contributions by the generations of immigrants who have helped us build our economy, and made America the economic engine of the world.

How do immigrants strengthen the U.S. economy? Below is our top 10 list for ways immigrants help to grow the American economy. ‎ars-paris.state.gov/pdf/wwwfso20.pdf. Famous American Immigrants. Albert Einstein: Greatest physicist of the twentieth century. 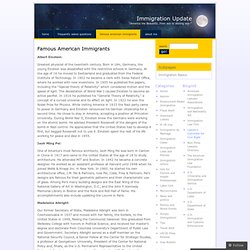 Born in Ulm, Germany, the young Einstein was dissatisfied with the restrictive schools in Germany. At the age of 16 he moved to Switzerland and graduated from the Federal Institute of Technology. In 1902 he became a clerk with Swiss Patent Office, where he worked with new inventions. Whitehouse : "Immigration makes us a stronger. Obama Tells New U.S. Citizens ‘Immigration Makes Us Stronger’ At a naturalization ceremony Monday at the White House President Obama personally congratulated twenty-eight new U.S. Citizens. The President also used the platform to challenge congress to “finish the job” of finalizing legislation that would create immigration reform. US Immigration Levels, by decade.

‎www.nps.gov/elis/forteachers/upload/Statistics.pdf. About the USA > Society >A Nation of Immigrants.