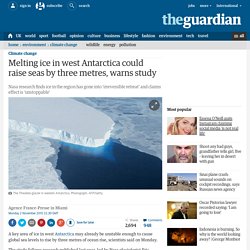 The study follows research published last year, led by Nasa glaciologist Eric Rignot, warning that ice in the Antarctic had gone into a state of irreversible retreat, that the melting was considered “unstoppable” and could raise sea level by 1.2 metres. This time, researchers at Germany’s Potsdam Institute for Climate Impact Research pointed to the long-term impacts of the crucial Amundsen Sea sector of west Antarctica, which they said “has most likely been destabilized”. Arctic Glacier collapses . Too close for comfort. "CHASING ICE" captures largest glacier calving ever filmed - OFFICIAL VIDEO.

Totten Glacier is in danger of collapse. University of Texas at Austin Under 2.5 miles of ice in southeastern Antarctica, a natural levee is about to break. 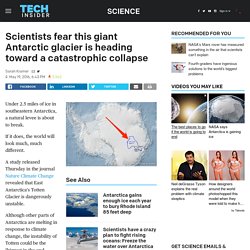 If it does, the world will look much, much different. A study released Thursday in the journal Nature Climate Change revealed that East Antarctica's Totten Glacier is dangerously unstable. Although other parts of Antarctica are melting in response to climate change, the instability of Totten could be the "biggest in the end, because it's continually unstable as you go toward the interior of the continent," Alan Aitken, a geologist at the University of Western Australia in Perth and an author of the study, told the Washington Post.

The Totten Glacier isn't Antarctica's largest glacier, but it's precariously perched upon a 1-mile-deep basin of snow and ice the size of California — which means it holds back more ice than any other place on the continent. The problem? The researchers recently discovered two zones where the glacier is particularly unstable. Antarctic ice is melting so fast the whole continent may be at risk by 2100. Antarctic ice is melting so fast that the stability of the whole continent could be at risk by 2100, scientists have warned. 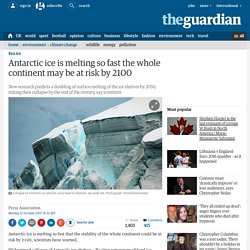 Widespread collapse of Antarctic ice shelves – floating extensions of land ice projecting into the sea – could pave the way for dramatic rises in sea level. The new research predicts a doubling of surface melting of the ice shelves by 2050. By the end of the century, the melting rate could surpass the point associated with ice shelf collapse, it is claimed.

If that happened a natural barrier to the flow of ice from glaciers and land-covering ice sheets into the oceans would be removed. Lead scientist, Dr Luke Trusel, Woods Hole Oceanographic Institution in Massachusetts, US, said: “Our results illustrate just how rapidly melting in Antarctica can intensify in a warming climate. “This has already occurred in places like the Antarctic Peninsula where we’ve observed warming and abrupt ice shelf collapses in the last few decades. Why scientists are so worried about the ice shelves of Antarctica. The photograph above shows an edge of the Thwaites Ice Shelf. 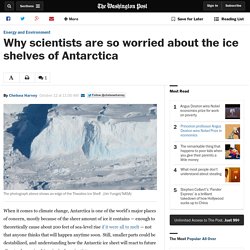 (Jim Yungel/NASA) When it comes to climate change, Antarctica is one of the world’s major places of concern, mostly because of the sheer amount of ice it contains — enough to theoretically cause about 200 feet of sea-level rise if it were all to melt — not that anyone thinks that will happen anytime soon. Still, smaller parts could be destabilized, and understanding how the Antarctic ice sheet will react to future climate change is a big priority for scientists. One important key to building this understanding is studying Antarctic ice shelves, which are large, floating platforms of ice — sometimes spanning hundreds or thousands of square miles — that form where where an ice sheet meets the ocean.

[Scientists declare an ‘urgent’ mission – study West Antarctica, and fast] Arctic ice age, 1987-2014. The Last Ice Age (120 000 years ago to Modern) The Last Glacial Cycle. Ice Age World Map. What is an Ice Age? Antarctic ice sheet. A satellite composite image of Antarctica Antarctic Skin Temperature Trends between 1981 and 2007, based on thermal infrared observations made by a series of NOAA satellite sensors. 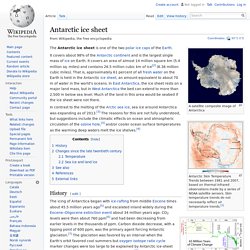 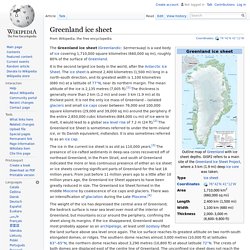