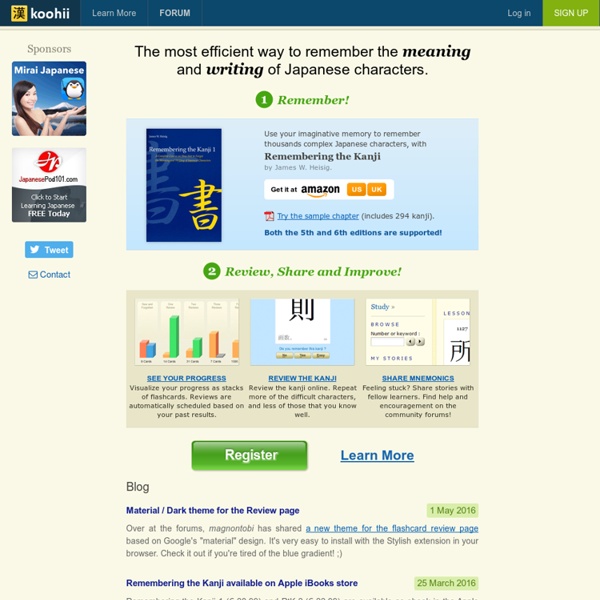 New in the Study pages: Example Words!8 April 2014 You can now see a selection of "priority" entries from JMdict (Japanese-Multilingual Dictionary) on any given character's Study page. You can also use the shortcut key D to view a selection of sample words during flashcard reviews (note these aren't optimized for mobile display, yet). I remember when I was going through RTK, I spent a lot of time looking up the characters in the Kanji Learner's Dictionary (KKLD). Having example words helps a lot to understand why Heisig chose certain english keywords, and it helps you make better mnemonics that more accurately capture the particular meaning, or common use of the character.

漢字学習 ・ Studying Kanji｜long island sound 今度は僕の漢字能力検定を対象にしている勉強の仕方について書きたいと思います。全くつまらないことでとても面白く読まれそうもないけど、誰かの役に立てるかもしれないし、僕にとってとても身近なことなのでちゃんとこの日記で筆記したいです。こんな風に勉強して、５００字位しか知らなかった、それに音訓の事等把握していなかった、初心者の頃から、４箇月という僅かな時間で日本語能力試験１級に合格できるようになりました。 This time I've decided to write about the methods I use in studying for the Kanji Kentei. Granted it's not a very interesting topic, but there's a chance it might prove useful to some readers, and anyway considering the amount of time I spend doing it in a day it's quite a familiar subject so I want to make sure to record it here. Using this method I was able to go from knowing a paltry 500 or so characters (although at the time I didn't understand the concept of On-Kun readings), to a level capable of passing the JLPT1 in a mere 4 months.

Genki Online:Self-study Room GENKI is a highly acclaimed series of integrated resources for learning elementary Japanese through a well-balanced approach to all four language skill areas—speaking, listening, reading, and writing. Used in many Japanese language courses around the world. More The second editions of GENKI Textbook I, Workbook I, and PICTURE CARDS I were released in February 2011 and feature four major revisions. Click the link here for a detailed look at those changes, plus information on the upcoming... More

Start Learning Hiragana Today Learn Hiragana Articles Learn hiragana as we take you step by step through each line of the hiragana chart. Coming soon – more articles covering every line on the official hiragana chart. Brand New To Hiragana? – Start with the A Line make your own 6-pocket mini pocketbook and stay organized — insatiable need I’m sure that many of you, like me, are on an eternal quest for organization. I know I’m not alone in finding the Container Store’s promise of a perfect, organized life utterly seductive. But here’s the thing…I don’t really like purging, I love my stuff.

Correspondre avec des Japonaises et des Japonais Bonjour a tous ! je suis japonaise je ne parle pas tres bien francais i would like to make new friends both male and female around my age (between 25-38 years old) who have similar interests. my hobbies are language, art, music, travel, cooking, films, party, going to concert and festivals, shopping , fashion, and much more. i'm planning on traveling to France and possibly another country i use Facebook, Twitter, Skype, LINE, e-mail feel free to message me i hope we can be good friend a bientot Bonjour! Nous faisons une soirée franco-japonaise à Tokyo et Osaka!

polarcloud.com About Rikaichan is a popup Japanese-English/German/French/Russian dictionary tool for Firefox, Thunderbird and Seamonkey. Features Simple to use, just hover the mouse on top of a Japanese word. Fully Lined Zippered Box Pouch - Pattern & Tutorial I love the look of a zippered box pouch...so incredibly cute. I found many tutorials on the internet, but was disappointed after making pouches following these tutorials to find that they were not fully lined; looks so much nicer when you open your pouch and there are no seams. It took me a long time to figure it out and I thought and thought and thought...then I got it♥ I don't want to keep this knowledge to myself, so here it is.

Tumbleweed&#039;s Resources for Learning Japanese Okay, here's a familiar scenario... For whatever reason, you've taken up the study of the Japanese language. You've gone through a couple of the beginner's level books, you've run through a couple of basic tutorial programs, you've even taken a couple of classes someplace. Then you decide to try out your new knowledge. You try talking to native speakers, you try to watch an unsubtitled movie or read a magazine.