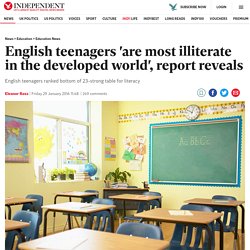 Young people aged between 16 and 19 have been found to possess only a “basic” grasp of maths and English, with nine million people of working age having low literacy or numeracy skills. The report, conducted by the OECD (the Operation for Economic Co-Operation and Development) found that out of 23 developed nations, English teens had the lowest literacy rates and the second to lowest numeracy rates. Download the new Independent Premium app Sharing the full story, not just the headlines The report summarised that one in five young university students could manage basic tasks but might struggle with anything advanced, like reading instructions on an aspirin bottle. It concluded: "university teaching gives limited attention to low levels of literacy and numeracy. South Korea came top of the list for both literacy and numeracy skills. 'Allow imaginations to lead': igniting the creative spark in young writers.

At Bridge Academy in London, a group of year 9 students are writing speeches. 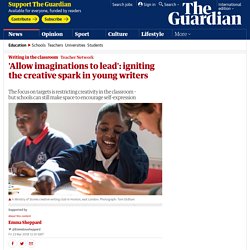 Later, they’ll deliver them to an audience of MPs and activists at the Houses of Parliament. Students plan to speak about racial profiling, cuts to the NHS and why the education system needs to change. National Literacy Trust. Children are reading less than ever before, research reveals. Children today read less frequently than any previous generation and enjoy reading less than young people did in the past, according to new research. 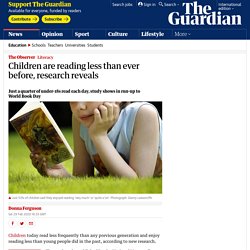 The work, to be published by the National Literacy Trust in the run-up to World Book Day on Thursday, shows that in 2019 just 26% of under-18s spent some time each day reading. This is the lowest daily level recorded since the charity first surveyed children’s reading habits in 2005. It also found that fewer children enjoy reading, and that this dwindled with age: nearly twice as many five to eight-year-olds as 14 to 16-year-olds said they took pleasure from reading. Overall, just 53% of children said they enjoyed reading “very much” or “quite a lot” – the lowest level since 2013. The poet and former children’s laureate Michael Rosen said the findings should act as a wake-up call for the government. Britain’s battle to get to grips with literacy is laid bare in H is for Harry. Life repeats itself, Grant says dejectedly. 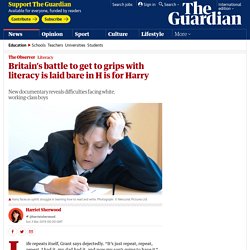 “It’s just repeat, repeat, repeat. I had it, my dad had it, and now my son’s going to have it.” He’s talking about illiteracy, which has trapped his family in poverty and shame for generations. But Grant is desperate to break the cycle. His hopes are pinned on his son, Harry, the engaging star of a new documentary that tracks the boy’s struggles with reading and writing during his first two years at secondary school. Harry is a white working-class boy, the demographic that does least well at school. Children who do not read and write in free time likely to have worse mental health. Children who are less engaged with reading and writing are more likely to struggle with their mental health, a new report has found. 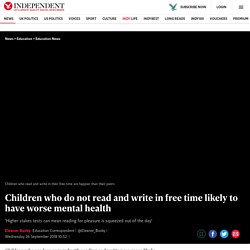 School pupils who enjoy reading and writing are three times as likely to have higher levels of mental wellbeing than their disengaged peers – 39.4 per cent compared to 11.8 per cent, research from charity National Literacy Trust (NLT) has found. The survey, of almost 50,000 children, reveals that 40.3 per cent of children with above expected reading skills had high levels of mental wellbeing, compared to 13.1 per cent who had below expected reading skills.

Download the new Independent Premium app Sharing the full story, not just the headlines. National curriculum in England: English programmes of study. Purpose of study English has a pre-eminent place in education and in society. 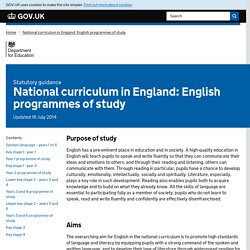 A high-quality education in English will teach pupils to speak and write fluently so that they can communicate their ideas and emotions to others, and through their reading and listening, others can communicate with them. Through reading in particular, pupils have a chance to develop culturally, emotionally, intellectually, socially and spiritually. Literature, especially, plays a key role in such development. Cressida Cowell: New Children's Laureate wants to 'take on TV' Talk for Writing – The key to raising attainment. TV ‘damages child language skills’ Edinburgh research finds. New university research has shown that more than three hours of TV viewing a day can have a negative effect on the language skills of 11 year olds. 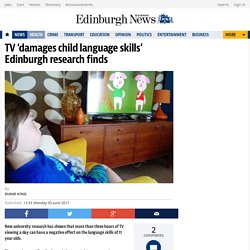 The study specifically found that watching more than three hours of TV each day has a greater negative effect on children who were already classed as poor performers. A research team from Queen Margaret University, Edinburgh and Newcastle University used data from thousands of children in the UK’s Millenium Cohort Study. It found that, while less is generally better than more when it comes to TV viewing, TV has a different effect depending on the children’s language skills at 11 years. Parent's Guide / Writing Skills. The grammar for writing pedagogy Grammar as Choice: Resources for Teachers - Centre for Research in Writing. At the University of Exeter’s Centre for Research in Writing, we have been investigating the contested issue of grammar teaching over many years. 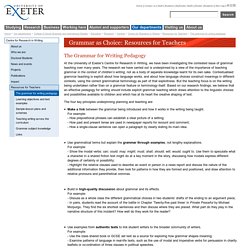 The research we have carried out is underpinned by a view of the importance of teaching grammar in the context of children’s writing, not as a body of separate knowledge learnt for its own sake. Contextualised grammar teaching is explicit about how language works, and about how language choices construct meanings in different contexts, using the correct grammatical terminology as part of that explicitness. But the teaching focus is on the writing being undertaken rather than on a grammar feature or terminology itself. Grammar for Writing. This page covers the first (efficacy) trial of Grammar for Writing, which tested whether it could work in schools under best possible conditions. 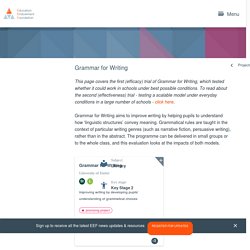 Parent child reading report - Press Office - Newcastle University. A positive effect Led by James Law, Professor of Speech and Language Sciences in Newcastle University's School of Education, Communication and Language Sciences, a team of experts found that receptive language skills – the ability to understand information – are positively affected when pre-school youngsters read with someone who cares for them. 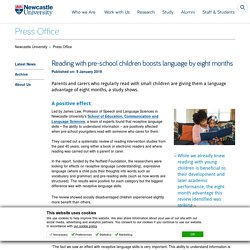 They carried out a systematic review of reading intervention studies from the past 40 years, using either a book or electronic readers and where reading was carried out with a parent or carer. In the report, funded by the Nuffield Foundation, the researchers were looking for effects on receptive language (understanding), expressive language (where a child puts their thoughts into words such as vocabulary and grammar) and pre-reading skills (such as how words are structured). The results were positive for each category but the biggest difference was with receptive language skills. The mystery of language: how children learn their mother tongue.

‘I want.’ ‘This go on here.’ ‘I’m eating my bread Mummy.’ ‘I’m going to Cookie Monster’s place, and I’m going to have a peanut-butter sandwich.’ You’ve just read sentences produced by children at 1 year and 8 months, 2 years and 3 months, 3 years and 4 years respectively. The journey from single syllables to full sentences is remarkably rapid, and has puzzled scientists for decades.

Starved, tortured, forgotten: Genie, the feral child who left a mark on researchers. She hobbled into a Los Angeles county welfare office in October 1970, a stooped, withered waif with a curious way of holding up her hands, like a rabbit. She looked about six or seven. Her mother, stricken with cataracts, was seeking an office with services for the blind and had entered the wrong room.

But the girl transfixed welfare officers. At first they assumed autism. Then they discovered she could not talk. Her name – the name given to protect her identity – was Genie. Over time, Genie slipped from headlines – Vietnam was burning, the Beatles were in the midst of breaking up – but she retained the attention of scientists, especially linguists. Preschoolers may not get enough 'back and forth' interactions for language development. Under-5s need more adult interactions to acquire language than previously thought and Kiwi kids may be missing out, according to a United States linguist who is visiting New Zealand. Professor Laura Justice, of Ohio State University, said regular "back and forth" communication is vital to speech development but preschool pupils often do not have sustained conversations due to staff numbers. The mum-of-two said regular interactions are crucial for young brains to fully develop. "We have a pretty solid understanding of what it takes for children to acquire language, which most acquire by the age of 5," she said.

READ MORE: * Calls to increase funding for cochlear implants as hundreds wait for surgery * Children need to learn to speak well to function in society * Children continue to wait several months for Early Intervention Services "There is a lot of emphasis right now on what we call serve and return, which is back and forth interaction, like a tennis game. Electronic Baby Toys Associated with Decrease in Quality and Quantity of Language in Infants. Electronic toys for infants that produce lights, words and songs were associated with decreased quantity and quality of language compared to playing with books or traditional toys such as a wooden puzzle, a shape-sorter and a set of rubber blocks, according to an article published online by JAMA Pediatrics. The reality for many families of young children is that opportunities for direct parent-child play time is limited because of financial, work, and other familial factors. Optimizing the quality of limited parent-child play time is important.

Anna V. Sosa, Ph.D., of Northern Arizona University, Flagstaff, and colleagues conducted a controlled experiment involving 26 parent-infant pairs with children who were 10 to 16 months old. Why are children so good at learning languages? Why talking - and listening - to your child could be key to brain development. More than 20 years ago, psychologists Betty Hart and Todd Risley discovered what they called the “30 million word gap.”

What to expect when your baby is learning to speak. Photo: Stocksy United. 5-ways-early-language-development-in-toddlers-can-predict-later-learning-ability#.WgS9Q7ZelgE. How baby talk words can boost infants’ language skills. Mama or dada? Research looks at what words are easiest for kids to learn. A baby's first words are often Mama or Dada, but new research by a Florida State University psychology professor delves into how children build on these early words to create a colorful vocabulary. The more children hear, the more they learn. EDITOR'S NOTE: This story appeared in the Studer Community Institute's education report. To read the Institute's full report, visit Studeri.com or PensacolaToday.com.

Thirty million words. Babyfirstwordcartoon. BBC Radio 4 - A History of Ideas, Barry Smith on Noam Chomsky and Human Language, Noam Chomsky on Language Aquisition. How 'baby talk' may give infants a cognitive boost. Friday January 9 2015. Babies-tv-brain-development-needs-101937124. A child’s development is largely determined by experiences. These days, those experiences increasingly involve the use of technology. Television, the internet, tablets and smartphones are all familiar to the youngest of eyes. HealthNewsDigest.com. Babbling Helps Babies Learn Language Faster. Talking to babies makes them start using language earlier, a new study shows. The study, published in Child Language Teaching and Therapy, examined data from the Growing Up in Ireland study in which 7,845 babies, around nine months of age, were studied and the factors that could affect child development such as breastfeeding, maternal education, gestational age and interactions with siblings were controlled.