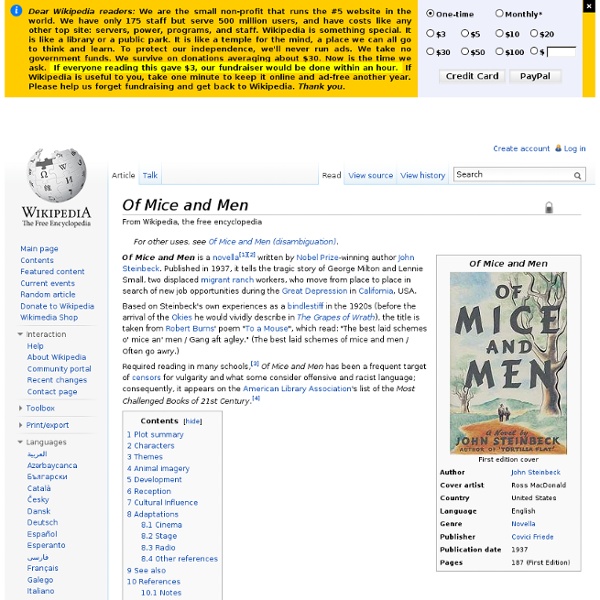 Of Mice and Men is a novella[1][2] written by Nobel Prize-winning author John Steinbeck. Published in 1937, it tells the story of George Milton and Lennie Small, two displaced migrant ranch workers, who move from place to place in search of new job opportunities during the Great Depression in California, United States. Based on Steinbeck's own experiences as a bindlestiff in the 1920s (before the arrival of the Okies he would vividly describe in The Grapes of Wrath), the title is taken from Robert Burns' poem "To a Mouse", which read: "The best laid schemes o' mice an' men / Gang aft agley." (The best laid schemes of mice and men / Often go awry.) Required reading in many schools,[3] Of Mice and Men has been a frequent target of censors for vulgarity and what some consider offensive and racist language; consequently, it appears on the American Library Association's list of the Most Challenged Books of 21st Century.[4] Plot summary Lennie accidentally kills his puppy while stroking it. Related:  Of Mice and Men • Steinbeck : Of Mice and Men Chapter 6

The Dust Bowl Migration: Poverty Stories, Race Stories The Dust Bowl migration of the 1930s plays an important and complicated role in the way Americans talk about the history of poverty and public policy in their country. For almost seventy years the story of white families from Oklahoma and neighboring states making their way to California in the midst of the Great Depression has been kept alive by journalists and filmmakers, college teachers and museum curators, songwriters and novelists, and of course historians. Although it was but one episode out of many struggles with poverty during the 1930s, the Dust Bowl migration became something of synecdoche, the single most common image that later generations would use to memorialize the hardships of that decade. The story begins in the summer of 1935. Those states had suffered greatly in the early 1930s, both from escalating joblessness and a severe drought that for several years denied much of the Great Plains sufficient rain to produce its usual complement of wheat and cotton.

The Great Depression - Facts & Summary Hoover, a Republican who had formerly served as U.S. secretary of commerce, believed that government should not directly intervene in the economy, and that it did not have the responsibility to create jobs or provide economic relief for its citizens. In 1932, however, with the country mired in the depths of the Great Depression and some 15 million people (more than 20 percent of the U.S. population at the time) unemployed, Democrat Franklin D. Roosevelt won an overwhelming victory in the presidential election. By Inauguration Day (March 4, 1933), every U.S. state had ordered all remaining banks to close at the end of the fourth wave of banking panics, and the U.S. Roosevelt took immediate action to address the country’s economic woes, first announcing a four-day “bank holiday” during which all banks would close so that Congress could pass reform legislation and reopen those banks determined to be sound.

Race During the Great Depression - American Memory Timeline- Classroom Presentation The problems of the Great Depression affected virtually every group of Americans. No group was harder hit than African Americans, however. By 1932, approximately half of black Americans were out of work. In some Northern cities, whites called for blacks to be fired from any jobs as long as there were whites out of work. Racial violence again became more common, especially in the South. Lynchings, which had declined to eight in 1932, surged to 28 in 1933. Although most African Americans traditionally voted Republican, the election of President Franklin Roosevelt began to change voting patterns. Still, discrimination occurred in New Deal housing and employment projects, and President Roosevelt, for political reasons, did not back all of the legislation favored by such groups as the National Association for the Advancement of Colored People (NAACP).

John Steinbeck American writer John Ernst Steinbeck Jr. (; February 27, 1902 – December 20, 1968) was an American author and the 1962 Nobel Prize in Literature winner "for his realistic and imaginative writings, combining as they do sympathetic humour and keen social perception."[2] He has been called "a giant of American letters,"[3] and many of his works are considered classics of Western literature.[4] Most of Steinbeck's work is set in central California, particularly in the Salinas Valley and the California Coast Ranges region. Early life Steinbeck graduated from Salinas High School in 1919 and went on to study English literature at Stanford University near Palo Alto, leaving without a degree in 1925. Between 1930 and 1936, Steinbeck and Ricketts became close friends. Career Writing Steinbeck's first novel, Cup of Gold, published in 1929, is loosely based on the life and death of privateer Henry Morgan. Between 1930 and 1933, Steinbeck produced three shorter works. Ed Ricketts 1940s–1960s work See also

Of Mice and Men: Context John Steinbeck was born in 1902 in Salinas, California, a region that became the setting for much of his fiction, including Of Mice and Men. As a teenager, he spent his summers working as a hired hand on neighboring ranches, where his experiences of rural California and its people impressed him deeply. In 1919, he enrolled at Stanford University, where he studied intermittently for the next six years before finally leaving without having earned a degree. For the next five years, he worked as a reporter and then as caretaker for a Lake Tahoe estate while he completed his first novel, an adventure story called Cup of Gold, which was published in 1929. In his acceptance speech for the 1962 Nobel Prize in literature, Steinbeck said: . . . the writer is delegated to declare and to celebrate man’s proven capacity for greatness of heart and spirit—for gallantry in defeat, for courage, compassion and love. Critical opinions of Steinbeck’s work have always been mixed.

Surviving the Dust Bowl . American Experience . WGBH Schedule Shop About the Series Sign up for Newsletter Contact Us Podcasts For Teachers Corporate Sponsorship Terms of Use Privacy Policy Additional Funding Provided By: Website ©1996-2012 WGBH Educational Foundation. This site is produced for PBS by WGBH. Full Website Of Mice and Men: Plot Overview Two migrant workers, George and Lennie, have been let off a bus miles away from the California farm where they are due to start work. George is a small, dark man with “sharp, strong features.” Lennie, his companion, is his opposite, a giant of a man with a “shapeless” face. The next day, the men report to the nearby ranch. The next day, George confides in Slim that he and Lennie are not cousins, but have been friends since childhood. Slim goes to the barn to do some work, and Curley, who is maniacally searching for his wife, heads to the barn to accost Slim. The next night, most of the men go to the local brothel. Lennie flees back to a pool of the Salinas River that George had designated as a meeting place should either of them get into trouble. When the other men arrive, George lets them believe that Lennie had the gun, and George wrestled it away from him and shot him.

The Migrant Experience - Voices from the Dust Bowl: the Charles L. Todd and Robert Sonkin Migrant Worker Collection, 1940-1941 | Collections | Library of Congress A complex set of interacting forces both economic and ecological brought the migrant workers documented in this ethnographic collection to California. Following World War I, a recession led to a drop in the market price of farm crops and caused Great Plains farmers to increase their productivity through mechanization and the cultivation of more land. This increase in farming activity required an increase in spending that caused many farmers to become financially overextended. At the same time, the increase in farming activity placed greater strain on the land. Although the Dust Bowl included many Great Plains states, the migrants were generically known as "Okies," referring to the approximately 20 percent who were from Oklahoma. Todd and Sonkin also held recording sessions with a few Mexican migrants living in the El Rio Farm Security Administration (FSA) camp. California was emphatically not the promised land of the migrants' dreams. Robin A.

Of Mice and Men: Themes, Motifs & Symbols Themes Themes are the fundamental and often universal ideas explored in a literary work. The Predatory Nature of Human Existence Of Mice and Men teaches a grim lesson about the nature of human existence. In scenes such as this one, Steinbeck records a profound human truth: oppression does not come only from the hands of the strong or the powerful. Fraternity and the Idealized Male Friendship One of the reasons that the tragic end of George and Lennie’s friendship has such a profound impact is that one senses that the friends have, by the end of the novella, lost a dream larger than themselves. Ultimately, however, the world is too harsh and predatory a place to sustain such relationships. The Impossibility of the American Dream Most of the characters in Of Mice and Men admit, at one point or another, to dreaming of a different life. Motifs Motifs are recurring structures, contrasts, and literary devices that can help to develop and inform the text’s major themes. The Corrupting Power of Women