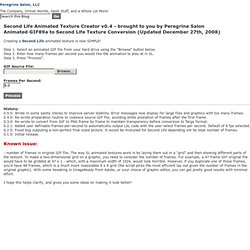 Step 1. Select an animated GIF file from your hard drive using the "Browse" button below.Step 2. Enter how many frames per second you would like the animation to play at in SL.Step 3. Texture Tools. From Second Life Wiki The purpose of this page is to increase awareness of resources that'll help you texture better in Second Life. 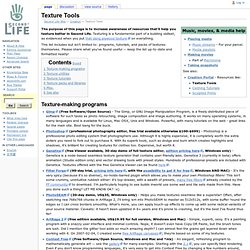 Texturing is a fundamental part of a building skillset, as evidenced when you put that dang plywood texture on everything. This list includes but isn't limited to: programs, tutorials, and packs of textures themselves. Uploading Textures and Sculpties For Free?? - Page 2. Sculpties. From Second Life Wiki Sculpted Prims Seven prim couch by Xenius Revere, using baked ambient occlusion. 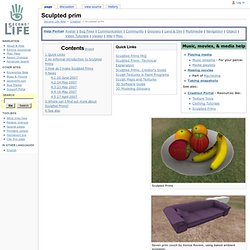 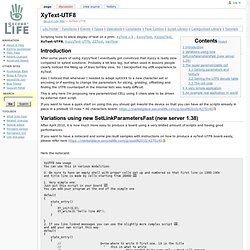 Probably a bit less lag, but when used in lessons people clearly noticed the filling up of lines terribly slow. So I backported my utf8 experience to XyText. Inkscape Tutorial: Seamless Patterns. First of all: working with patterns in Inkscape is not without challenges. 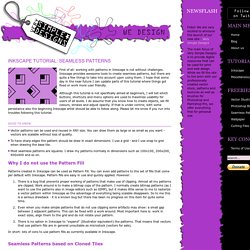 Inkscape provides awesome tools to create seamless patterns, but there are quite a few things to take into account upon using them. I hope that some day in the near future I can update parts of this tutorial where things got fixed or work more user friendly. Although this tutorial is not specifically aimed at beginners, I will tell which buttons, shortcuts and menu options are used to maximize usability for users of all levels. I do assume that you know how to create objects, set fill colours, strokes and adjust opacity. If that is under control, with some persistance also the beginning Inkscape artist should be able to follow along. Sound Clips. Are Virtual Worlds Real or Fake? The Oculus Rift virtual reality headset and Second Life, part one - National Second Life. “You need to develop VR legs, like you need to develop sea legs on a boat.” 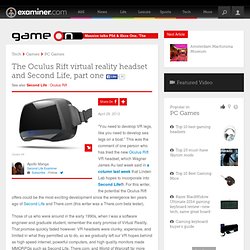 This was the comment of one person who has tried the new Oculus Rift VR headset, which Wagner James Au last week said in a column last week that Linden Lab hopes to incorporate into Second Life®. For this writer, the potential the Oculus Rift offers could be the most exciting development since the emergence ten years ago of Second Life and There.com (this writer was a There.com beta tester). Those of us who were around in the early 1990s, when I was a software engineer and graduate student, remember the early promise of Virtual Reality.

That promise quickly faded however. VR headsets were clunky, expensive, and limited in what they permitted us to do, so we gradually left our VR hopes behind as high speed internet, powerful computers, and high quality monitors made MMORPGs such as Second Life, There.com, and World of Warcraft far more compelling despite the limitation of viewing them on computer monitors. Aaron's blog. Isa’s Thoughts Sit. Looking at my last post’s date it’s somewhat of a surprise that its been so long since I have blogged here. 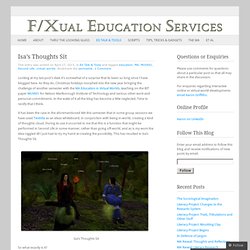 As they do, Christmas holidays morphed into the new year bringing the challenge of another semester with the MA Education in Virtual Worlds, teaching on the BIT paper MUV601 for Nelson Marlborough Institute of Technology and various other work and personal commitments. In the wake of it all the blog has become a little neglected. F/Xual Education Services. Because both Second Life and OpenSim grids have prim limits, one of the things I taught myself to construct very early on in my inworld builds were rezzers; at their most basic a method of rezzing objects inworld from another object’s Content area (or in scripting terms the object’s inventory). 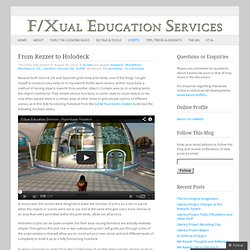 They served various functions; in some cases to cause objects to rez only when people were in a certain area, at other times to give people options of different scenes, as in this fully functioning holodeck from the SLENZ Foundation Studies build (see the following YouTube video). In most cases the rezzers were designed to lower the number of prims on a sim or parcel when the objects or scenes were not in use and at the same time give users more choices in an area than were permitted within the prim limits, albiet not all at once. Holodeck scripts can be quite complex but their base rezzing functions are actually relatively simple. Linked Object Showing Object Centre. Assembling the Holodeck. In this series to date I have talked about the two main functions used to rez objects from another object’s inventory, setting the rotations of those rezzed objects and passing an integer from the rezzer to the rezzed objects. 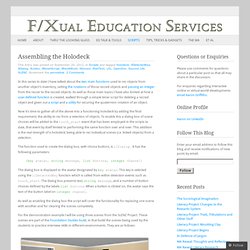 As well as those main topics I have also looked at how a user-defined function is created, walked through a simple timer script for deleting a rezzed object and given out a script and a utility for securing the quaternion rotation of an object. Now it’s time to gather all of the above into a functioning holodeck by adding the final requirement; the ability to rez from a selection of objects. Adjusting Teleporter Rotations. In looking at setting automatic calculations for teleporter destinations I demonstrated how the rotation of the teleporter affects the final destination. 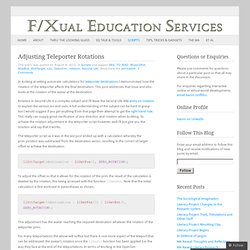 This post addresses that issue and also looks at the rotation of the avatar at the destination. Rotation in Second Life is a complex subject and I’ll leave the Second Life Wiki entry on rotation to explain the various ins and outs. A full understanding of the subject can be hard to grasp but I would suggest if you get anything from that page then attempt to get the right hand rule. This really can supply good clarification of axis direction and rotation when building. To achieve the rotation adjustment in the teleporter script however; well I’ll just give you the solution and say that it works. Isa’s Quaternion Rotation Utility. After the post Rez Object Rotations, Eloise Pasteur response in the SLED listserv suggested that “It’s faster and neater in your code, whenever you can, to enter the quaternion directly”, and I do have to agree.

Isa’s Quaternion Rotation utility is a small tool that will provide this rotation for your scripts. The Quaternion Rotation Utility To find a particular quaternion rotation set the utility to the required X, Y and Z rotations in the Build window then touch it. The rotation will be displayed in both the floating text and in main chat for copying and pasting into your code. Places. Thailand Knowledge Park: Bangkok.

Research Observatory @ UWE. Please note: Links on this page alongside the image open in a new window. - close this messageIf you understand this message and would like to stop it from popping up, please tick/select this checkbox Synthesize means: The Primstar (machinima) LSL Scripting. Script Me! English français deutsch 日本語. LSL script Library of free LSL scripts. LSL Wiki : Link. Script Libraries - The Schommunity Wiki. XYText Noticeboard - The Schommunity Wiki. From The Schommunity Wiki Hey mark - i think i may have a solution to having to re-arrange them every time you change the text so that they are all in one neat line, however I haven't been able to try it out yet.WHat if you set four prims down all in perfect line, then did the below?