Insights show how consumers use different devices together 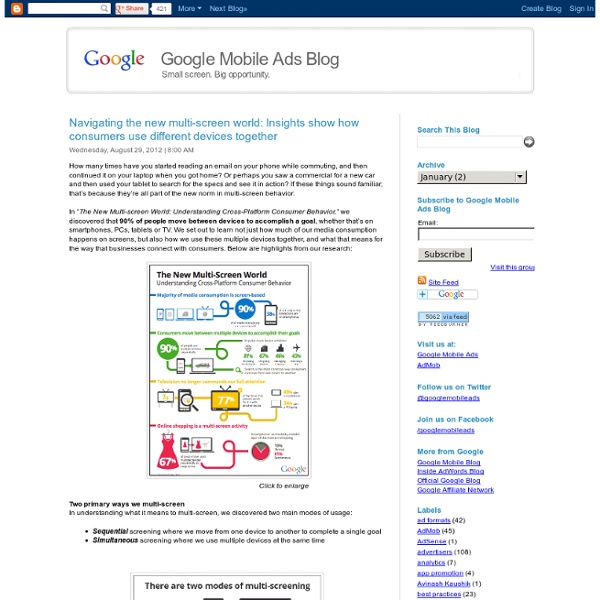 How many times have you started reading an email on your phone while commuting, and then continued it on your laptop when you got home? Or perhaps you saw a commercial for a new car and then used your tablet to search for the specs and see it in action? If these things sound familiar, that’s because they’re all part of the new norm in multi-screen behavior. Click to enlarge Two primary ways we multi-screenIn understanding what it means to multi-screen, we discovered two main modes of usage:Sequential screening where we move from one device to another to complete a single goalSimultaneous screening where we use multiple devices at the same time We found that nine out of ten people use multiple screens sequentially and that smartphones are by far the most common starting point for sequential activity. So what does this all mean for marketers?

Outlook Report Vol 10 Mobile devices are used frequently in conjunction with other screens, including the big TV in your living room. Anyone who has ever tapped out an email on their iPhone, while checking a score on the VAIO balanced on their lap, while keeping an eye on American Idol on their 40-inch BRAVIA knows this. Yet many marketers today are ignoring this ubiquitous consumer behavior as they over-focus on mobile as a stand-alone medium. Media multitasking is not a new thing, of course. At a minimum, multitasking adds another layer of complexity to the evolution of media measurement. Which leads us to this: Lots of data has been published about the fact that consumers are using mobile and tablet devices while watching TV, but little of it has gone deep enough to be really useful in planning a multi-screen strategy. We found that a stunning 80 percent of respondents are mobile multitasking while watching TV. Multitasking is both an enhancement and a distraction. Reality News Comedy Sports Food

Instapaper I tried leaving Facebook. I couldn’t When I was in college, my high school best friend and I had a terrible falling-out. Five features that make Overcast better than Apple Podcasts I’ve been listening to podcasts on Apple devices long before it became mainstream. The Strange History of the “King-Pine” In the seventeenth and eighteenth century, a pineapple frenzy swept Europe. Mark Zuckerberg Doesn’t Understand Journalism Marcio Jose Sanchez / AP Mark Zuckerberg wants you to know that he cares, really cares, about journalism. The Reinvention of America Americans don’t realize how fast the country is moving toward becoming a better version of itself. The Teens Who Hacked Microsoft's Videogame Empire—And Went Too Far Among those involved in David Pokora’s so-called Xbox Underground, one would become an informant, one would become a fugitive, and one would end up dead.

Twice as much TV? How networks are adapting to the second screen Network AMC has created an interactive mobile app called Story Sync for its "Walking Dead" series. Using another digital device while watching TV is fairly commonTV networks are experimenting with ways to reach their audiences on the second screenThey have to keep in mind that less is more and be wary of distractionsThe possibilities of second screen are still developing (CNN) -- The next time you pause to watch TV -- anything from the morning news to a prime time drama -- try an experiment: Watch the show in its entirety without interacting with another device. That means no checking email, no texting, Tweeting, pinning, visiting Facebook or hunting for spoilers. No unlocking your smartphone every 60 seconds or casually flipping through content on your tablet or e-reader. For many of us, that's far less intuitive than it sounds. But for 41% of tablet owners and 39% of those owning smartphones, that multitasking is more like once a day, at a minimum.

Your Future TV Is Not About Tele-Vision The word is a combination of tele--from the Greek meaning "far"--and vision, from the Latin word visionem, which means "the act of seeing." Call it remote viewing, if you're a sci-fi type, but "television" has until very recently meant one thing only: It's a one-way window into another world. That's very swiftly about to change. GetGlue, which styles itself as a "growing social network for entertainment, where you check-in and share shows, movies, music with your friends" has just revealed a new iPad app. For now, the future is being displayed on your tablet alone, via app's like GetGlue's new one: It's designed to be smart and prioritize shows you already prefer. It's a very bold play to occupy the "second screen," which we're all using at the same time that we're watching TV. Which basically means TV is now boring us. GetGlue would like us to consider using its app to fill the capability gap, but it's not alone. Or at least, that's what we hope. [Image: Flickr user Grant Jones]

Web Apps With Push Notifications: W3C Begins Work to Make it Hap Real-time alerts and notifications are a powerful feature being added to more applications every day; the addition of real-time notifications can make a big difference in user experience and peoples' work performance when using apps. Unfortunately, there's not one standard way to easily code these notifications across platforms and there's very little support for web apps seeking to send notifications to users. It's been one of the advantages that desktop apps have had over the web. The web's primary international standards organization, the W3C, has decided to tackle the issue with the formation of a new Web Notification Working Group this week. The Group has published an Editor's Draft for the specification and it's a good read. Want a web-based Twitter client with popup desktop messages? What's Included The document is scoped to define "APIs [Application Programming Interfaces] to generate notifications to alert users outside of the web page." Behind the Scenes

Report: How People Really Use Tablets While Watching TV About half of all smartphone and tablet owners use these devices while watching TV. That shouldn’t come as a surprise, because about half of all smartphone and tablet owners probably use these devices during every single activity of their lives. But when someone uses their iPhone during Game of Thrones, are they actually reading about the show, or are they just buying shoes? Should that second screen be related to the television or not? This has been a bit of an unanswered question, but that hasn’t stopped many apps--like Xbox Smartglass--from being built to extend the TV into one’s lap. Nielsen’s latest report gathered some hard numbers on the trend. Nielsen told me that these TV integration numbers are probably higher than was previously assumed. In terms of building tablet experiences around the television, I do think the research can teach us something: Namely, most people are using second screens in a distracting way. Read more here. [Illustration: Kelly Rakowski/Co.Design]