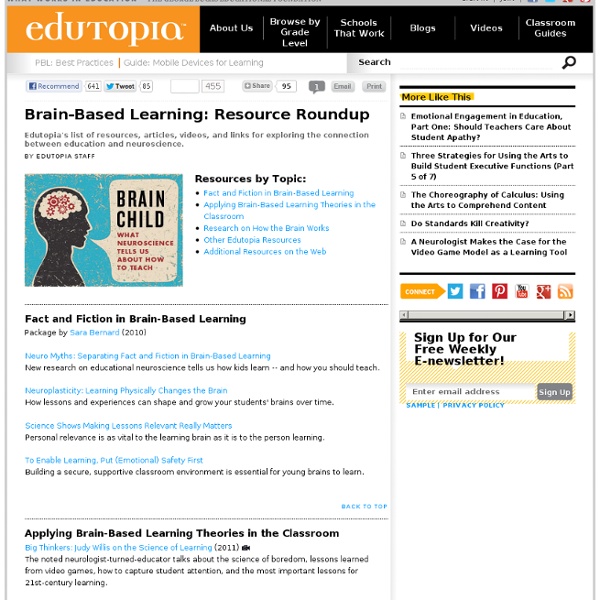 Edutopia's list of resources, articles, videos, and links for exploring the connection between education and neuroscience. (Updated: 12/2013) Building Brain Literacy in Elementary Students, By Judy Willis, M.D. (2013) Neurologist, teacher, author and Edutopia blogger Willis discusses the benefits of teaching elementary students how their brains work. Brains, Brains, Brains! How the Mind of a Middle Schooler Works, by Heather Wolpert-Gawron (2013) Blogger Wolpert-Gawron launches this three-part series by advising middle school teachers to read up on brain research with insight on how the 'tween brain works. In her second blog, The Mind of a Middle Schooler: How Brains Learn, read about important brain terminology and a typical classroom scenario where a middle schooler's brain is hard at work. Related:  Brain-Based Learning • Language acquisition • 21st century students

BrainConnection.com - Education Connection - What is Brain Based Learning? The Organ of Learning To many, the term “brain-based learning” sounds redundant. Isn’t all learning and teaching brain-based? Advocates of brain-based teaching insist that there is a difference between “brain-compatible” education, and “brain-antagonistic” teaching practices and methods which can actually prevent learning. In his book, Human Brain and Human Learning (1983), Leslie Hart argues that teaching without an awareness of how the brain learns is like designing a glove with no sense of what a hand looks like–its shape, how it moves. All around us are hand-compatible tools and machines and keyboards, designed to fit the hand. Granted, the brain is infinitely more complex than the hand. Like Hart, Caine and Caine choose to interpret brain research holistically. These principles are not, the authors are the first to admit, definitive or closed to revision; as more is discovered about the brain, how we learn and remember, educators will need to update their knowledge:

Doing It Differently: Tips for Teaching Vocabulary Every Monday my seventh grade English teacher would have us copy a list of 25 words she'd written on the board. We'd then look up the dictionary definitions and copy those down. For homework, we'd re-write each word seven times. Good, now you know it. Copying definitions from the dictionary we would probably all agree is not an effective way to learn vocabulary. The truth is, and the research shows, students need multiple and various exposures to a word before they fully understand that word and can apply it. Selecting Words Ah, so many words, so little time. My first year teaching, before my tenth graders began reading Lord of the Flies, I went through every chapter and made lists of all the vocabulary words I thought they'd have trouble with, so that I could pre-teach them. When I looked at those long lists, I began to freak out. Then, here's what to do after the students pick their own words: Read through them all and use the results as a formative assessment. Ranking Words The Rationale

Pretty pictures: Can images stop data overload? 16 April 2012Last updated at 19:01 ET By Fiona Graham Technology of business reporter, BBC News Brain scan: Research suggests that one way to avoid being overloaded by data is by presenting it visually rather than text or numbers Sitting at your desk in the middle of the day, yet another email notification pops up in the corner of the screen, covering the figures you're trying to digest in the complicated spreadsheet in front of you. Your laptop is open on the desk next to you with another set of figures you need - meanwhile you're frantically tabbing through different documents on the main screen. You have a meeting in 20 minutes and you suddenly feel as if you're swimming in a sea of impenetrable data, and you're starting to sink. Welcome to the 21st Century workplace, and "data overload". Under siege You're not alone. Dr Lynda Shaw is a neuroscience and psychology lecturer at Brunel University in the west of London. "When we feel overwhelmed we start to delay making decisions." “Start Quote

Rejecting Instructional Level Theory A third bit of evidence in the complex text issue has to do with the strength of evidence on the other side of the ledger. In my two previous posts, I have indicated why the common core is embracing the idea of teaching reading with much more complex texts. But what about the evidence that counters this approach? Many years ago, when I was a primary grade teacher, I was struggling to teach reading. I knew I was supposed to have groups for different levels of kids, but in those days information about how to make those grouping decisions was not imparted to mere undergraduates. So, I enrolled in a master’s degree program and started studying to be a reading specialist. I maintained my interest in this issue when I went off for my doctorate. He had (has) a great clinical sense and he was skeptical of my faith in the value of those instructional level results. For Jack, the combination of two such rough guestimates was very iffy stuff. Except that there is not. How can that be? P.S.

Brain-based Learning Design Principles 12 Design Principles Based on Brain-based Learning Research By Jeffery A. Lackney, Ph.D. Based on a workshop facilitated by Randall Fielding, AIA Rich-simulating environments – color, texture, "teaching architecture", displays created by students (not teacher) so students have connection and ownership of the product. This list is not intended to be comprehensive in any way. A second caveat to presenting these design principles for brain-compatible learning environments concerns the need to use as many of these principles in combination in the design of a school building as possible. Workshop Summary Narrative: The objectives of the brain-based workshop track of the CEFPI Midwest Regional Conference were to: (a) understand the latest developments and findings from brain research; (b) discuss how these findings may educational curriculum and instruction for learning; and (c) explore what the implications these findings may have on school design. www.designshare.com

Michael Halliday Michael Alexander Kirkwood Halliday (often M.A.K. Halliday) (born 13 April 1925) is a British-born Australian linguist who developed the internationally influential systemic functional linguistic model of language. His grammatical descriptions go by the name of systemic functional grammar (SFG).[1] Halliday describes language as a semiotic system, "not in the sense of a system of signs, but a systemic resource for meaning".[2] For Halliday, language is a "meaning potential"; by extension, he defines linguistics as the study of "how people exchange meanings by 'languaging'".[3] Halliday describes himself as a generalist, meaning that he has tried "to look at language from every possible vantage point", and has described his work as "wander[ing] the highways and byways of language".[4] However, he has claimed that "to the extent that I favoured any one angle, it was the social: language as the creature and creator of human society".[5] Biography[edit] Studies of grammar[edit] 1967–68.

Welcome To Mixed Reality 2015 is going to be remembered as the year we entered an entirely new world, a world today known as Mixed Reality. What is Mixed Reality? In short, Mixed Reality is the world which we now inhabit where real and virtual objects co-exist and can causally influence each other. In Mixed Reality persistent virtual objects can be created, seen, and manipulated and they exist and are perceived as integrated with the real world. Together with the Internet of Things where environmental objects embed computational elements, sensors, and connectivity, Mixed Reality will radically alter the way we interact with and think about the world. Reality as we know it just ended. In 1994 Paul Milgram and Fumio Kishino defined a Mixed Reality as “…anywhere between the extrema of the virtuality continuum.” “The conventionally held view of a Virtual Reality (VR) environment is one in which the participant-observer is totally immersed in, and able to interact with, a completely synthetic world.

Anne Murphy Paul: Why Floundering Makes Learning Better Call it the “learning paradox”: the more you struggle and even fail while you’re trying to master new information, the better you’re likely to recall and apply that information later. The learning paradox is at the heart of “productive failure,” a phenomenon identified by Manu Kapur, a researcher at the Learning Sciences Lab at the National Institute of Education of Singapore. Kapur points out that while the model adopted by many teachers and employers when introducing others to new knowledge — providing lots of structure and guidance early on, until the students or workers show that they can do it on their own — makes intuitive sense, it may not be the best way to promote learning. Rather, it’s better to let the neophytes wrestle with the material on their own for a while, refraining from giving them any assistance at the start. (MORE: Paul: The Secret to Grace Under Pressure) With one group of students, the teacher provided strong “scaffolding” — instructional support — and feedback.