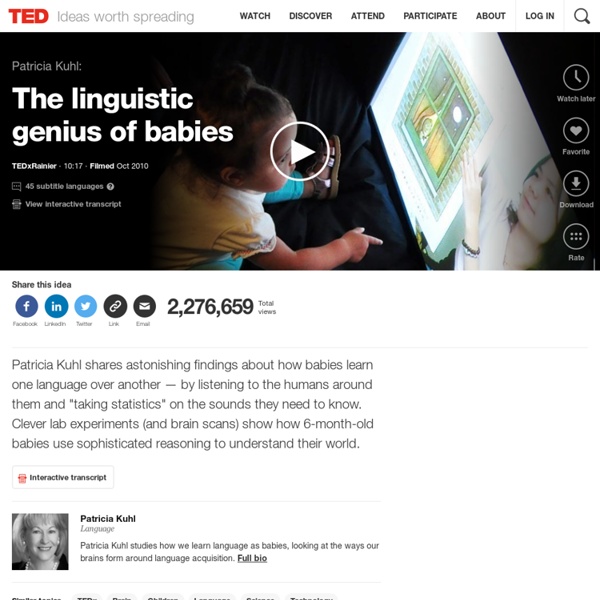 Babbling Helps Babies Learn Language Faster Talking to babies makes them start using language earlier, a new study shows. The study, published in Child Language Teaching and Therapy, examined data from the Growing Up in Ireland study in which 7,845 babies, around nine months of age, were studied and the factors that could affect child development such as breastfeeding, maternal education, gestational age and interactions with siblings were controlled. It was found that reading to babies improved their problem-solving and communication skills, while showing them pictures improved their communication skills but did not affect their problem-solving abilities. However, talking to children absent-mindedly, as one would do with a friend, was far better than either reading to them or talking in drills with some ulterior purpose of teaching them language. A study in 2014 showed that infants whose parents babble with them learn language faster. These studies contradict the notion that babbling with children harms them. A Baby

How 'baby talk' may give infants a cognitive boost Friday January 9 2015 Babies seem to be born hard-wired with language skills "Say 'mama'! Talking to babies boosts their ability to make friends and learn,” the Mail Online reports. It is important to stress that a review of this sort is not the same as fresh evidence. The review must largely be considered to be the authors’ opinion based on the studies they have looked at. That said, the authors’ arguments would chime with most parents’ instinctive beliefs: regularly talking to your baby is a “good thing”. However, whether talking to your baby has greater effects on their learning capacity or ability to make friends in the future is something that cannot be proven by this review. Where did the story come from? The study was written by two psychologists from New York University and Northwestern University in the US. What kind of research was this? The authors provide no methods for their review. What do the authors discuss? What do the authors conclude? Conclusion

HealthNewsDigest.com (HealthNewsDigest.com) - People tend to have a distinctive way of talking to babies and small children: We speak more slowly, using a sing-song voice, and tend to use cutesy words like "tummy". While we might be inclined to think that this kind of "baby talk" is easier for children to understand, new research findings in Psychological Science, a journal of the Association for Psychological Science, suggest that mothers may actually speak less clearly to their infants than they do to adults. We often try to produce sounds more distinctly when there is a chance a listener won't understand us - imagine speaking to someone over a noisy telephone connection - and some researchers have proposed that parents do the same thing when addressing children, in an unconscious attempt to help them learn the sounds of the language. But there has been little scientific evidence available to confirm this proposal.

The more children hear, the more they learn EDITOR'S NOTE: This story appeared in the Studer Community Institute's education report. To read the Institute's full report, visit Studeri.com or PensacolaToday.com. Thirty million words. That's the difference between poor children and their better-off classmates. It boils down to that number in programs from the South Side of Chicago to the Pensacola Metro. It comes from a 1995 study by child psychologists that found by age 4, poor children hear 30 million fewer words than children from better-off families. This leads to poor children lagging academically, being weaker readers and falling behind in school. Dana Suskind founded Thirty Million Words at the University of Chicago Medical School to drive awareness of the achievement gap and promote strategies to close it. The Hart and Risely study is what everybody talks about, Suskind says, because it is the study that revealed the 30-million-word gap. Suskind and her team's research is conducted with Head Start families in Chicago.

Mama or dada? Research looks at what words are easiest for kids to learn A baby's first words are often Mama or Dada, but new research by a Florida State University psychology professor delves into how children build on these early words to create a colorful vocabulary. "Children leverage their early world knowledge to help them unlock their language skills," said FSU Assistant Professor of Psychology Arielle Borovsky. "Knowing a few related words helps children recognize links between new word meanings, and this could be a very useful strategy for helping children learn vocabulary early in life. This might be part of the explanation for why children begin to start 'talking up a storm' between the ages of 18-24 months." So, for example, Mama and Dada might lead to sister or brother. Borovsky uses the example of a kiwi. However, when confronted with one, it is easier for them to learn the word because they are already familiar with related words. "Children start to say words somewhere around their first birthday," Borovsky said.

Baby talk words with repeated sounds help infants learn language -- ScienceDaily Babies find it easier to learn words with repetitive syllables rather than mixed sounds, a study suggests. Assessments of language learning in 18-month-olds suggest that children are better at grasping the names of objects with repeated syllables, over words with non-identical syllables. Researchers say the study may help explain why some words or phrases, such as 'train' and 'good night', have given rise to versions with repeated syllables, such as choo-choo and night-night. The researchers say such words are easier for infants to learn, and may provide them with a starter point for vocabulary learning. A team from the University of Edinburgh assessed the infants' language learning behaviour in a series of visual and attention tests using pictures on a computer screen of two unfamiliar objects. The infants were then tested for their recognition of each made-up word. Previous studies show that infants more easily learn patterns involving repetition in visual sequences and musical notes.

Infants' brains attuned to baby talk and nursery rhymes Researchers in Cambridge believe that babies learn best when their brain waves are in sync with their parents'. The study has also shown that infants are attuned to baby talk and nursery rhymes. The research indicates that babies need to feel safe, secure and loved for brain connections to be properly formed to enable them to learn effectively. The findings are emerging from a baby brain scanning project at Cambridge University. To a newborn, the world is a rush of sights and sounds, an overload of information. But then the world gradually comes into focus. This is a crucial moment in all our lives when important connections are being formed in the brain. To learn just how this happens, researchers at a baby lab in Cambridge are scanning the brains of babies and their mums while the two are interacting in learning activities. The early indications are that when the brain waves of mothers and babies are out of sync, the babies learn less well. Image copyright Cambridge University

Babies remember their birth language - scientists Image copyright Thinkstock Babies build knowledge about the language they hear even in the first few months of life, research shows. If you move countries and forget your birth language, you retain this hidden ability, according to a study. Dutch-speaking adults adopted from South Korea exceeded expectations at Korean pronunciation when retrained after losing their birth language. Scientists say parents should talk to babies as much as possible in early life. Dr Jiyoun Choi of Hanyang University in Seoul led the research. The study is the first to show that the early experience of adopted children in their birth language gives them an advantage decades later even if they think it is forgotten, she said. ''This finding indicates that useful language knowledge is laid down in [the] very early months of life, which can be retained without further input of the language and revealed via re-learning,'' she told BBC News. Korean consonants are unlike those spoken in Dutch.

Technology Empowers Parents to Minimize the Word Gap | AAAS - The World's Largest General Scientific Society During an Annual Meeting session, experts discussed their efforts to increase the number of words heard by children in low-income households. | Ashley Gilleland/AAAS BOSTON — Efforts to close the word gap — the vast difference in the number of words heard by children from low-income and higher-income homes — by working with the parents and caregivers of very young children have shown promising new results in the behavior of parents and children, according to three researchers at a Feb. 17 briefing at the 2017 AAAS Annual Meeting in Boston. The word gap is not just an educational issue — it is one of the most important public health problems, the researchers said. One novel approach is akin to a Fitbit for language, said Caitlin Molina, executive director of Providence Talks, a program that aims to close the word gap citywide. Early results also show that families maintain progress, Molina added, with 70% of families who have completed follow-ups maintaining word gains.

Toddler's knowledge of grammar increases at 24 months Toddler's early grammar skills are not inherent but learned, research has found. Children's ability to understand basic grammar early in language development has puzzled researchers for a long time, who were unsure if the skill is innate or learned over time. But research involving child speech patterns has revealed that grammatical knowledge is learned gradually with a significant increase at the age of 24 months. Previous research on children's speech has shown that the use articles such as 'a' and 'the' early and mostly in a correct way, but the researchers said its difficult to sort out whether children are just imitating adults or if they actually understand that articles should be used before nouns such as 'dog' or 'shoe' Baby talk is not just a way of engaging with infant on a social level – it has important implications for language learning from the very first moments of a newborn's life. 'We really didn’t know what to expect because there were these conflicting reports out there.'