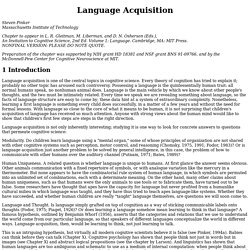 R. Gleitman, M. Liberman, and D. N. Osherson (Eds.), An Invitation to Cognitive Science, 2nd Ed. Preparation of the chapter was supported by NIH grant HD 18381 and NSF grant BNS 91-09766, and by the McDonnell-Pew Center for Cognitive Neuroscience at MIT. 1 Introduction Language acquisition is one of the central topics in cognitive science. Language acquisition is not only inherently interesting; studying it is one way to look for concrete answers to questions that permeate cognitive science: Modularity. Human Uniqueness. Language and Thought. This is an intriguing hypothesis, but virtually all modern cognitive scientists believe it is false (see Pinker, 1994a). Language and Cognition: Theories of Language Acquisition. The nature vs. nurture debate extends to the topic of language acquisition. 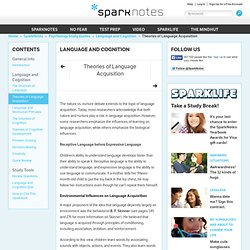 Today, most researchers acknowledge that both nature and nurture play a role in language acquisition. However, some researchers emphasize the influences of learning on language acquisition, while others emphasize the biological influences. Environmental Influences on Language Acquisition A major proponent of the idea that language depends largely on environment was the behaviorist B. F. According to this view, children learn words by associating sounds with objects, actions, and events. Critics of this idea argue that a behaviorist explanation is inadequate. Theories of Language Development. The Learning Perspective The Learning perspective argues that children imitate what they see and hear,and that children learn from punishment and reinforcement. 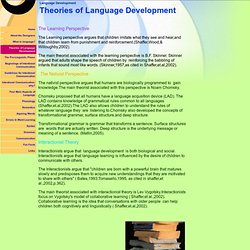 (Shaffer,Wood,& Willoughby,2002). The main theorist associated with the learning perspective is B.F. Skinner. Skinner argued that adults shape the speech of children by reinforcing the babbling of infants that sound most like words. The Nativist Perspective The nativist perspective argues that humans are biologically programmed to gain knowledge.The main theorist associated with this perspective is Noam Chomsky. 4.1 child language acquisition theory – chomsky, crystal, Aitchison & piaget. David Crystal’s Theory On Child Language Acquisition Professor Crystal is best known for his two encyclopaedias The Cambridge Encyclopaedia of Language and The Cambridge Encyclopaedia of the English Language. 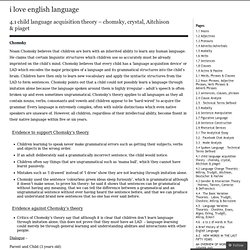 So what does this have to do with child language acquisition? David Crystal has the theory that children learn language in five stages, which aren’t clearly defined and some tie in with each other. These stages are: Stage One: How Children Acquire and Produce Language (BBC, 2001) Babyfirstwordcartoon. The Wild Children. Lucy LaRue has Object Permanence (10 Months) Lucy LaRue 7 months - no object permanence. "Amn't": How do children learn their native language? Patricia Kuhl: The linguistic genius of babies. BBC Radio 4 - Word of Mouth, Baby Talk. BBC Radio 4 - Word of Mouth, First Words: How do children develop language? 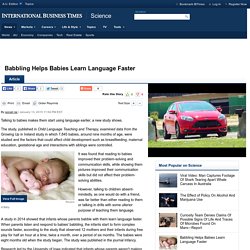 The study, published in Child Language Teaching and Therapy, examined data from the Growing Up in Ireland study in which 7,845 babies, around nine months of age, were studied and the factors that could affect child development such as breastfeeding, maternal education, gestational age and interactions with siblings were controlled. HealthNewsDigest.com. (HealthNewsDigest.com) - People tend to have a distinctive way of talking to babies and small children: We speak more slowly, using a sing-song voice, and tend to use cutesy words like "tummy". 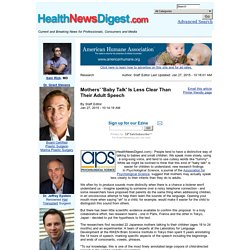 While we might be inclined to think that this kind of "baby talk" is easier for children to understand, new research findings in Psychological Science, a journal of the Association for Psychological Science, suggest that mothers may actually speak less clearly to their infants than they do to adults. We often try to produce sounds more distinctly when there is a chance a listener won't understand us - imagine speaking to someone over a noisy telephone connection - and some researchers have proposed that parents do the same thing when addressing children, in an unconscious attempt to help them learn the sounds of the language.

Opening your mouth more when saying "ah" to a child, for example, would make it easier for the child to distinguish this sound from others. How 'baby talk' may give infants a cognitive boost. Friday January 9 2015 Babies seem to be born hard-wired with language skills "Say 'mama'! 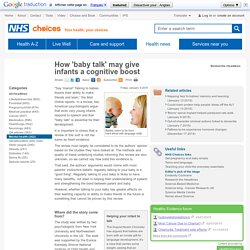 Talking to babies boosts their ability to make friends and learn,” the Mail Online reports. In a review, two American psychologists argue that even very young infants respond to speech and that "baby talk" is essential for their development. It is important to stress that a review of this sort is not the same as fresh evidence. The review must largely be considered to be the authors’ opinion based on the studies they have looked at. That said, the authors’ arguments would chime with most parents’ instinctive beliefs: regularly talking to your baby is a “good thing”. However, whether talking to your baby has greater effects on their learning capacity or ability to make friends in the future is something that cannot be proven by this review.

Where did the story come from? The study was written by two psychologists from New York University and Northwestern University in the US. What do the authors discuss? BBC Radio 4 - A History of Ideas, Barry Smith on Noam Chomsky and Human Language, Noam Chomsky on Language Aquisition.