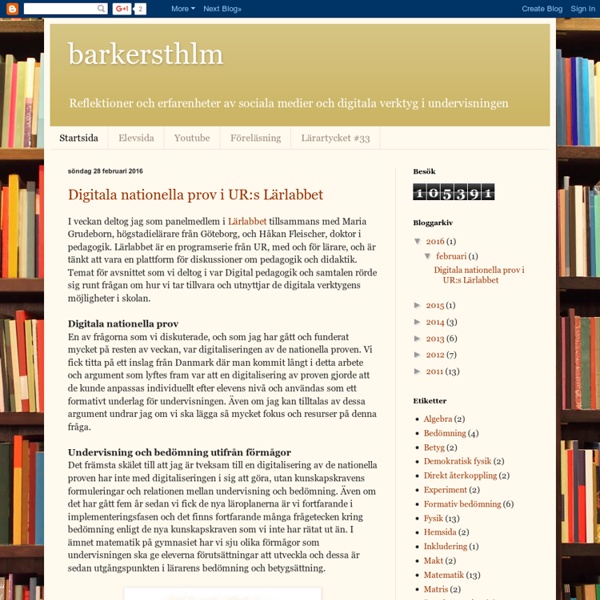 Flipping The Classroom (Reverse Instruction) The Minimalist’s Guide to Creating a Class or Course Web Site January 30, 2014 Have you wished you had a web site to share assignments, links, discussions, and more, but always thought it would be too difficult to create one? It absolutely doesn’t have to be. Educators are increasingly turning to technology to improve their teaching, communication and organization skills. Having a web page to use to deliver and […] 20 Ways to Avoid Peer Pressure Alison Bell (writing in Teen Magazine) suggests: 1. Ask 101 questions. For example, if a pal pressures you to smoke, ask her why she smokes, how long she has smoked, if she minds having ashtray breath. 2.

Apps That Rise to the Top: Tested and Approved By Teachers Michelle Luhtala/Edshelf With the thousands of educational apps vying for the attention of busy teachers, it can be hard to sift for the gold. Michelle Luhtala, a savvy librarian from New Canaan High School in Connecticut has crowd-sourced the best, most extensive list of apps voted on by educators around the country. “I wanted to make sure we had some flexibility because there’s no one app that’s better than all the others,” Luhtala said. Some apps are best for younger students, others are more complicated, better suited for high school students.

Beyond the Basics of the Flipped Classroom E-Learning | Feature Beyond the Basics of the Flipped Classroom Flipped learning has been around long enough now for teachers to figure out their own variations. Feast Your Eyes on This Beautiful Linguistic Family Tree 552K 18.4KShare337 When linguists talk about the historical relationship between languages, they use a tree metaphor. An ancient source (say, Indo-European) has various branches (e.g., Romance, Germanic), which themselves have branches (West Germanic, North Germanic), which feed into specific languages (Swedish, Danish, Norwegian). 26 iPad Apps For A Paperless Classroom 26 iPad Apps For A Paperless Classroom by TeachThought Staff The paperless classroom is a compelling concept for what it symbolizes as much as anything else. While it sounds sleek and futuristic and easy to organize and environmentally friendly, the reality is that paperless classrooms aren’t that simple. The “environmentally-friendly” part, for example, is wildly subjective: the costs of manufacturing–and eventually recycling and disposing of–tablets versus the loss of “renewable” trees and the subsequent waste that is environmentally-friendly.

The Best Resources For Learning How To Use The Dictogloss Strategy With English Language Learners Dictogloss is primarily a listening and writing activity used with English Language Learners. It can certainly be done a number of different ways but, very simply-put, the teacher reads a short text, often one students are familiar with. Then, after the first time of just listening, the teacher reads it again and students write down notes of what they have heard. Next, the teacher reads it a third time and, again, the student writes down additional notes. The student then compares his/her notes with another student’s notes and they work together to develop an accurate reconstruction of the text — one that is not necessarily the exact wording, but that demonstrates its meaning accurately. Finally, the teacher reads it again and students judge how well they did.