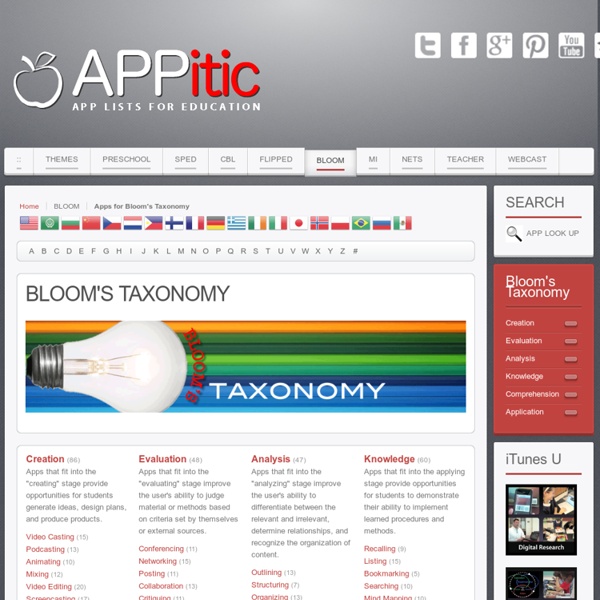 Psychologists Identify the Best Ways to Study Education generally focuses on what you study, such as algebra, the elements of the periodic table or how to conjugate verbs. But learning how to study can be just as important, with lifelong benefits. It can teach you to pick up knowledge faster and more efficiently and allow you to retain information for years rather than days. Cognitive and educational psychologists have developed and evaluated numerous techniques, ranging from rereading to summarizing to self-testing, for more than 100 years.

Unleashing Creativity: Greg Kulowiec App Smashing - from Beth Holland Greg Kulowiec begins his session by asking, “Why limit our students to one tool at one time?” With App Smashing, students can create content with a variety of apps and then publish it to the web – don’t let content “die on your iPad.” The general concept between App Smashing is merging content from a variety of apps. 10 Amazing Productivity Apps You Aren't Using Increase productivity every day with these 10 amazing apps. December 26, 2012 Dropbox, Evernote and Sanebox are some of the top apps on anyone’s list of time-saving devices, but I gotta tell you, there are some other great up-and-coming phone and desktop/laptop apps that help you get more done faster inside and outside the office.

The Teacher's Guide To Flipped Classrooms Since Jonathan Bergman and Aaron Sams first experimented with the idea in their Colorado classrooms in 2004, flipped learning has exploded onto the larger educational scene. It’s been one of the hottest topics in education for several years running and doesn’t seem to be losing steam. Basically, it all started when Bergman and Sams first came across a technology that makes it easy to record videos. They had a lot of students that regularly missed class and saw an opportunity to make sure that missing class didn’t mean missing out on the lessons. Once students had the option of reviewing the lessons at home, the teachers quickly realized the shift opened up additional time in class for more productive, interactive activities than the lectures they’d been giving. And voila: a movement began.

20 Best Mobile Productivity Apps of 2012 2012 has come to a close. Time to highlight the year’s best new mobile productivity apps. Here is my list of the best mobile productivity apps of 2012. There are apps for Android, iOS, and Windows Phone. All of these apps are either new or major updates. We Don't Like "Projects" So I recently quit my job and started my own school with the support of a local media company, the second largest school district in Iowa, and a groundswell of community interest. Our philosophy boils down to a fairly liberal project-based learning environment. As I began the marketing push to enroll students, I uncovered some frankly stunning assumptions that many students have about learning:

20 Ways to Avoid Peer Pressure Alison Bell (writing in Teen Magazine) suggests: 1. Ask 101 questions. For example, if a pal pressures you to smoke, ask her why she smokes, how long she has smoked, if she minds having ashtray breath. 2. Create Your Own Survey Ready to write? Good survey questions are the key to successful answers. Here are some survey question best practices: Use simple, direct language. Wordiness and complex grammar will only lead your respondents to interpret the answer in different ways, therefore deteriorating the quality of your data. Be specific.

Spanish Language Arts, Literacy in History/Social Studies, Science, and Technical Subjects A rich education recognizes the importance of language. With a fully developed mastery of primary and secondary languages, students are able to appreciate the literary and expressive quality of written texts and be able to use languages effectively to express their thoughts, reflections, and ideas in speech and writing. In addition, students are able to see themselves as participating in multiple linguistic communities and understanding the perspectives of different cultures. While one purpose of this standards document is to describe what we want students to know and be able to do, another is to create a common community of a shared educational goal, literacy in Spanish. Two very important recommendations must be taken into account on implementing these standards: 1.

Common Core: Reading, Understanding & Analyzing Complex Texts *ISTE Workshop: Transitioning to the Common Core with Google Apps – Join me! In my previous post “Common Core: What is a ‘complex text’ anyway?” I wrote about the three aspects of a text that the Common Core measures to determine its “complexity,” which include: 1) quantitative, 2) qualitative, 3) reader and task. SPANISH COGNATES Spanish cognates are an integral part of developing a person's Spanish vocabulary. If you are an English speaker you are fortunate in that much of the English language is comprised from numerous languages. Therefore, many words in Spanish resemble words in English and if studied should provide the Spanish student a quick source of building a strong Spanish vocabulary.