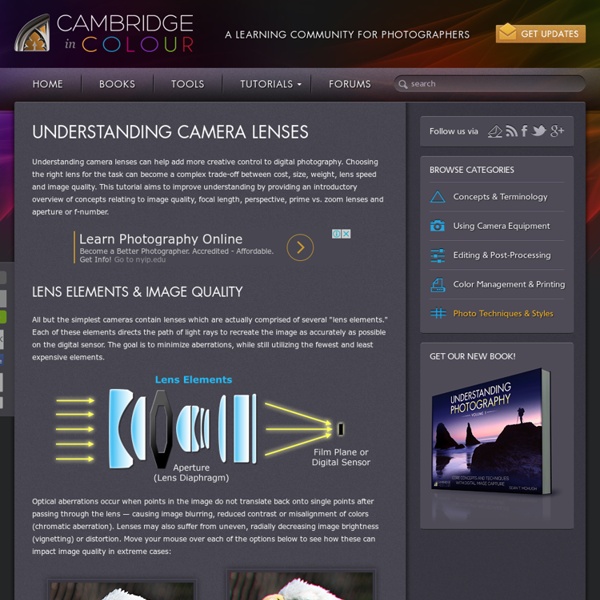 Understanding camera lenses can help add more creative control to digital photography. Choosing the right lens for the task can become a complex trade-off between cost, size, weight, lens speed and image quality. This tutorial aims to improve understanding by providing an introductory overview of concepts relating to image quality, focal length, perspective, prime vs. zoom lenses and aperture or f-number. All but the simplest cameras contain lenses which are actually comprised of several "lens elements." Each of these elements directs the path of light rays to recreate the image as accurately as possible on the digital sensor. The goal is to minimize aberrations, while still utilizing the fewest and least expensive elements. Optical aberrations occur when points in the image do not translate back onto single points after passing through the lens — causing image blurring, reduced contrast or misalignment of colors (chromatic aberration). Original Image ZOOM LENSES vs.

Cheap Surveillance Camera System [DIY] Cheap Surveillance Camera System is a DIY project. I just launched a low cost surveillance camera project, which is named as PCam (Peek Camera). The project is made up of an LPC2100 microcontroller, a serial camera, and an SD card slot. An optional passive IR detector can be connected to the microcontroller as the alert input. Composition: Using the Rule of Thirds The rule of thirds is a powerful compositional technique for making photos more interesting and dynamic. It's also perhaps one of the most well known. This article uses examples to demonstrate why the rule works, when it's ok to break the rule, and how to make the most of it to improve your photography. The rule of thirds states than an image is most pleasing when its subjects or regions are composed along imaginary lines which divide the image into thirds — both vertically and horizontally: Rule of Thirds Composition Region Divided Into Thirds

Kazuhito Takadoi — ABOVE: 'Oeda' (Bough)BELOW: 'Shikaku' (Square) Having studied horticulture in Japan and the US before relocating to the UK, Takadoi enrolled on an Art and Garden Design degree at Leeds Metropolitan University. ‘I remember visiting National Trust gardens on a trip to England when I was 17,’ he recalls. ‘I was fascinated by plants and always wanted to study here. It was perfect for me because it was a chance to learn about environmental art.’ Canon EF 50mm F1.8 II Lens Review: 1. Introduction The Canon EF 50mm F1.8 II is the least expensive lens currently available for the EOS system, and has been in the lineup since late 1990. It's a simplified version of the original EF 50mm F1.8 of 1987 (often referred to as the 'Mark I') which was supplied as standard with some of Canon's earliest 35mm EOS SLRs; however it can trace its lineage back a lot further than that, as the company has been making 50mm F1.8 standard lenses since 1959. Like its predecessor, it uses simple symmetric Gaussian optics with six elements in five groups, in a well-proven formula which is known to offer excellent correction of aberrations.

AF 14 mm f/2.8 Nikkor ED-IF Wide Horizons: The AF 14 mm f/2.8 Nikkor ED-RF By Bjørn Rørslett Review date 27 August, 2000 Patricia Swannell Patricia Swannell works predominantly with print, as well as creating fluid large scale abstract watercolours. Her works are inspired by the beauty of nature and the dark threats to the natural world. Patricia collects willow branches and leaves, ferns and grasses. These natural materials are used on the printing press so that the paper becomes embossed with their shapes and textures. From large trees, to tiny seeds and fragile grasses, Patricia’s transforms flotsam and jetsom into works of beauty and resonance. Her focus on environmental matters is also reflected in her work for The Royal Botanic Garden Kew at Wakehurst Place.

Wide-Angle Lenses For Nikon 'F' Mount Nikon pushes its optical program towards even shorter focal lengths with this ultrawide-angle lens. It is compact and surprisingly heavy with a smallish built-in scalloped sunshade that barely protects the huge bulbous front element. Exterior finish is similar to the 17-35 Nikkor, but sadly Nikon has dropped the engraving of numerals, these are just printed. The hood is solid metal. There is a gel filter slot at its rear end and no front filtration seems possible. Download More than 2,500 Images of Vibrant Japanese Woodblock Prints and Drawings From the Library of Congress Thanks to the Library of Congress, you can browse and download high-resolution copies of more than 2,500 Japanese woodblock prints and drawings from the library’s online collection. The prints, most of which are dated before the 20th-century, were amassed from a large group of collectors, including notable donors such as President William Howard Taft and Supreme Court Justice Oliver Wendell Holmes. Despite the diversity of genres and traditions represented by the library’s large collection, the most prolific works are ones created in the tradition of the Japanese art form of Ukiyo-e or Yokohama-e. Ukiyo-e was developed in the city of Edo (now Tokyo) between 1600 and 1868 during a relatively peaceful period. The subject and inspiration for many of the prints includes that of entertainment and leisure, such as scenes from kabuki theater and fashionable restaurants.

Bacteria from 300-year-old Ovid poetry volume inspires 'bio-artist' There was more than poetry trapped between the leather covers of a 300-year-old volume of Ovid’s Metamorphoses: blood, sweat and snot feature in an art installation that displays the bacteria within its pages. The sweat and the droplets from an ancient sneeze that spattered one page were contributed by centuries of previous owners and readers of the book – but the blood was the artist’s own, donated by Sarah Craske as part of the medium for cultivating the organisms. Craske found the rare early English translation of Ovid’s epic Latin poem, published in London in 1735, in a junk shop in Margate.