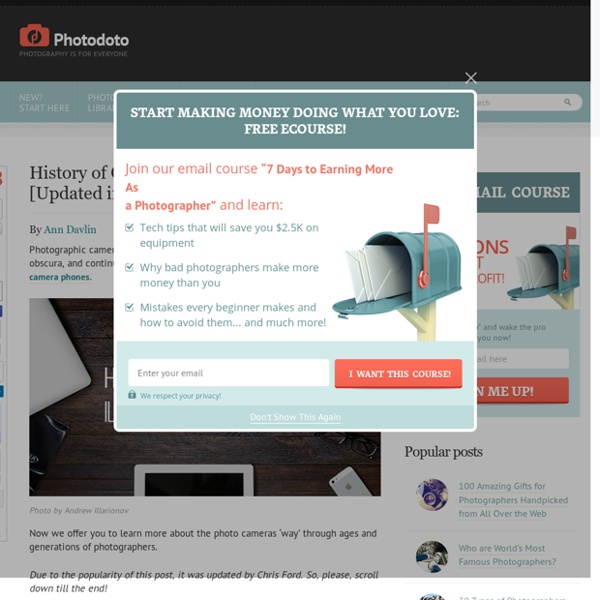 Email Photographic cameras’ roots go deep. Everything started with the camera obscura, and continued with Daguerreotypes, 35mm cameras, digital cameras and camera phones. Photo by Andrew Illarionov Now we offer you to learn more about the photo cameras ‘way’ through ages and generations of photographers. Due to the popularity of this post, it was updated by Chris Ford. The first pinhole camera (also called the Camera Obscura) was invented by Alhazen (Ibn Al-Haytham). The Daguerreotype Camera was announced by the French Academy of Sciences. The first American patent issued in photography to Alexander Wolcott for his camera. The panoramic camera patented by Thomas Sutton. Oliver Wendell Holmes invents stereoscope viewer. George Eastman patents Kodak roll-film camera. First mass-marketed camera – the Brownie was presented by Eastman. The Raisecamera (travel camera) was invented. The first 35mm still camera (also called candid camera ) developed by Oskar Barnack of German Leica Camera. Update

Afghan Girl on Cover of Magazine, Photos, Wallpapers In December 1984, Afghanistan was five years into a bloody civil war between the Soviet Union, which sought to maintain a Marxist government there, and anti-government Islamic rebels called mujahideen. Millions of refugees were pouring over the borders into Pakistan to escape the fighting. National Geographic photographer Steve McCurry was in the region for a story on the refugee crisis. McCurry approached the girl, and she agreed to let him take her picture. "I didn't think the photograph of the girl would be different from anything else I shot that day," he later recalled. What emerged was a searingly beautiful image of a young girl with haunting eyes who came to symbolize the plight and the pain and the strength of her people. National Geographic chose a close-up of the girl as the cover photo for the article, which ran in the June 1985 issue. A Mystery for Years Her name was Sharbat Gula, which means "sweetwater flower girl" in Pashtu, the language of her Pashtun tribe. Reunited

A Complete History of the Camera Phone Cameras in phones are ubiquitous. Few of us see the need to carry a dedicated device for taking photos or videos anymore, and digital camera sales have slumped. But how did we get here? Let’s take a look at the history of the camera phone. Samsung Sharp built the first camera phone The first cell phone with a built-in camera was manufactured by Samsung and released in South Korea in June of 2000. There’s a strong argument that the first real camera phone was produced by Sharp and released in Japan by J-Phone (now SoftBank Mobile) in November of 2000. First U.S. camera phone – Sanyo SCP-5300 It was November 2002 before the U.S. adopted the crazy Japanese trend with the Sanyo SCP-5300 on Sprint. By the end of 2003, camera phones were really taking off in the U.S. and over 80 million had already been sold worldwide. 1.3MP arrives with Audiovox PM8920 Continuing to push the camera phone trend, Sprint released the PM8920 in July of 2004. By the end of 2004 the camera phone was riding high.

Shaped by War: Photographs by Don McCullin | Photography review | Art and design | The Observer Don McCullin's most celebrated image is his portrait of a dazed American soldier, entitled Shellshocked US Marine, Hue, Vietnam. It was taken during the battle for the city of Hue in 1968 and, in its stillness and quiet intensity, says as much about the effects of war on the individual psyche as many of McCullin's more graphic depictions of conflict and carnage. The eyes that stare out beneath the grimy helmet are not staring at the camera lens, but beyond it, into nowhere. Surprisingly, when I ask McCullin about the photograph, which features in this retrospective of his reportage in Manchester, he grimaces. Now 64, and married for the third time, McCullin lives and works in rural Somerset. There is a sense when talking to McCullin that he carries a great burden of loss and regret. This extraordinary exhibition will do nothing to help his cause. In Vietnam, McCullin lived among the American soldiers, many of whom, he says, thought him mad. McCullin famously prints his own photographs.

Five ways the digital camera changed us Photography firm Kodak has run into hard times, with critics suggesting it has failed to effectively adapt to digital. But four decades ago Kodak was credited with building the first digital camera, an innovation that has changed the world. The first was a box the size of a small coffee machine with a cassette stuck to the side. Little did anyone know when it took its first image in 1975 that this Heath Robinson-esque prototype would nearly obliterate the market for camera film and turn us all into potential Robert Doisneaus or Henri Cartier-Bressons, recording everything from the banal to the beautiful on our mobile phones. Steven Sasson invented that boxy first digital camera for Kodak. But the company has struggled to fully profit from its invention, and with its share price plunging last year there has been growing disquiet about the company's prospects. Now, according to Samsung, 2.5 billion people around the globe have a digital camera. But how have digital cameras changed us?

Face of the future: Photographer daubs models with flecks of neon paint in a stunning series of out-of-this-world images Impressive portraits taken by Brazilian photographer Hid SaibModels were daubed with make up which glowed under ultraviolet lightsPaint flecks resembles a galaxy of stars sprinkled across models' faces By Lucy Crossley Published: 03:56 GMT, 6 January 2014 | Updated: 08:56 GMT, 6 January 2014 Glittering under ultraviolet light, these models appear to have an unearthly glow. Taken by Brazilian photographer Hid Saib, the impressive set of portraits features a number of models splattered with paint and illuminated under the ultraviolet light. Some of the paint flecks have an out-of-this-world quality, with the droplets resembling a galaxy of stars dotted across his subjects' faces and shoulders. Other worldly: Glittering under ultra violet light a model is given an unearthly glow in this photograph by Hid Saib Alien: The impressive set of portraits features a number of young models splattered with paint which is illuminated under the neon light

25 Incredibly Detailed Black And White Portraits of the Homeless by Lee Jeffries Lee Jeffries career began as a sports photographer, capturing the beautiful game of football in Manchester. Then a chance meeting with a homeless woman living in the streets of London changed his life forever. He has since dedicated himself to capturing gripping portraits of the disenfranchised. Shooting exclusively in black and white, Lee Jeffries’ 135+ pictures can be viewed in his Flickr Photostream. The majority are closeup portraits with incredible detail. Each photograph exudes so much raw character and depth, you find yourself studying each shot with great intensity. Lee Jeffries lives in Manchester in the United Kingdom. Lee Jeffries recalls that, initially, he had stolen a photo from this young homeless girl huddled in a sleeping bag. The models in his photographs are homeless people that he has met in Europe and in the United States: «Situations arose, and I made an effort to learn to get to know each of the subjects before asking their permission to do their portrait.»