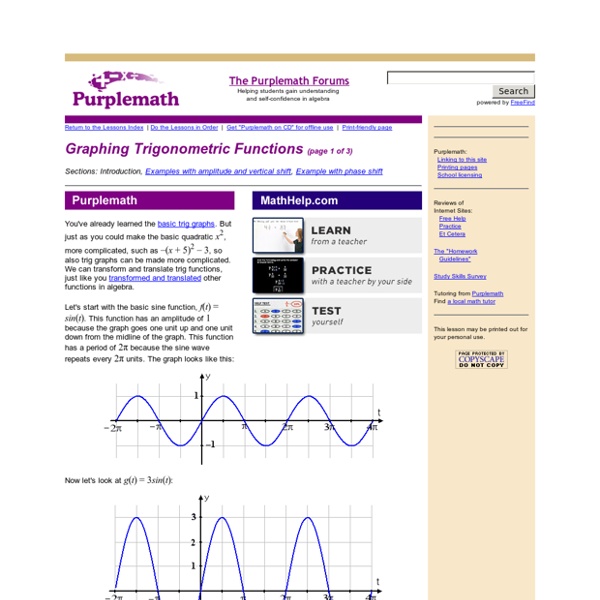 Graphing Trigonometric Functions (page 1 of 3) Sections: Introduction, Examples with amplitude and vertical shift, Example with phase shift You've already learned the basic trig graphs. But just as you could make the basic quadratic x2, more complicated, such as –(x + 5)2 – 3, so also trig graphs can be made more complicated. We can transform and translate trig functions, just like you transformed and translated other functions in algebra. Let's start with the basic sine function, f(t) = sin(t). Now let's look at g(t) = 3sin(t): Do you see that the graph is three times as tall? Now let's look at h(t) = sin(2t): Copyright © Elizabeth Stapel 2010 All Rights Reserved Do you see that the graph is squished in from the sides? For sines and cosines (and their reciprocals), the "regular" period is 2π, so the formula is: For tangents and cotangents, the "regular" period is π, so the formula is: In the sine wave graphed above, the value of B was 2. Now let's looks at j(t) = sin(t – π/3):

4. Graphs of tan, cot, sec and csc by M. Bourne The graphs of tanx, cotx, secx and cscx are not as common as the sine and cosine curves that we met earlier in this chapter. However, they do occur in engineering and science problems. They are interesting curves because they have discontinuities. Graphs of trig functions Big, fancy word, right? Don't be fooled. Looking at the prefix, tri-, you could probably assume that trigonometry ("trig" as it's sometimes called) has something to do with triangles. You would be right! Trig is the study of the properties of triangles. Amplitude, Period, Phase Shift and Frequency Some functions (like Sine and Cosine) repeat forever and are called Periodic Functions. The Period is the length from one peak to the next (or from any point to the next matching point): The Amplitude is the height from the center line to the peak (or to the trough).

Lesson HOW TO - Solve Trigonometric equations Introduction The solution of trigonometric equations is one topic that students have particular problems with. There are a few reasons for this: 1. there is usually a simplify part first that requires use of some TRIG identities. 2. there is the use of RADIANS rather than degrees, for which some students are not at ease with. 3. there is the repetitive aspect of TRIG functions that students find bewildering. All in all, a potentially daunting topic. To be honest though, there is nothing that you need fear here, so long as you take it methodically and slowly.

The Graphs of Sine and Cosine A sine wave, or sinusoid, is the graph of the sine function in trigonometry. A sinusoid is the name given to any curve that can be written in the form (A and B are positive). Trig identities and examples Big, fancy word, right? Don't be fooled. Looking at the prefix, tri-, you could probably assume that trigonometry ("trig" as it's sometimes called) has something to do with triangles. You would be right! Radians to degrees How to convert degrees to radians or radians to degrees. Theory: What are 'radians' ? One radian is the angle of an arc created by wrapping the radius of a circle around its circumference. In this diagram, the radius has been wrapped around the circumference to create an angle of 1 radian. The pink lines show the radius being moved from the inside of the circle to the outside:

Solving Trigonometric Equations Solving Trigonometric Equations (page 1 of 2) Solving trig equations use both the reference angles you've memorized and a lot of the algebra you've learned. Be prepared to need to think! Solve sin(x) + 2 = 3 for 0° < x < 360° Just as with linear equations, I'll first isolate the variable-containing term: sin(x) + 2 = 3 sin(x) = 1

Basic Trigonometric Graphs Trigonometric Functions and Their Graphs: The Sine and Cosine (page 1 of 3) Sections: The sine and cosine, The tangent, The co-functions At first, trig ratios related only to right triangles. Then you learned how to find ratios for any angle, using all four quadrants. Then you learned about the unit circle, in which the value of the hypotenuse was always r = 1 so that sin(θ) = y and cos(θ) = x. In other words, you progressed from geometrical figures to a situation in which there was just one input (one angle measure, instead of three sides and an angle) leading to one output (the value of the trig ratio).

Review : Trig Functions The intent of this section is to remind you of some of the more important (from a Calculus standpoint…) topics from a trig class. One of the most important (but not the first) of these topics will be how to use the unit circle. We will actually leave the most important topic to the next section. First let’s start with the six trig functions and how they relate to each other. Recall as well that all the trig functions can be defined in terms of a right triangle.